Why would a handsome young new neighbor man pay any attention to a sixty-year-old maid who works in her flower garden and raises tea plants? Why are her book club members mad at her, and why can’t her walking group keep up with her anymore? Can it have anything to do with the tea she is drinking each night from the leaves the new neighbor has provided to her? Age is as old as you feel. 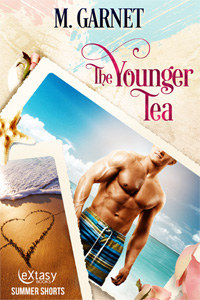 Stella sat back on her heels to pick a marigold bloom. Most people would not appreciate the smell of marigolds, but Stella had an affinity for all plants, even using petals of the marigolds in her salads.

Sitting there on the damp earth, she didn’t feel the aches and pains that age had brought to her body. Having just turned sixty, she had found that age was catching up with her.

There were wrinkles at the edge of her eyes and gray streaking her long dark hair that she wore in a braid. She accepted growing old, as she saw the friends her in new book club all showing the same results of age. It was the way of life.

“Oh my, Stella. How can you stand to be down in all that dirt and leaves?” This was from Virginia, Stella’s neighbor.

Stella laughed, running her fingers through the rich dirt. She stared at the pansies that had spread out their beautiful colors of purple, the color that matched her eyes. Behind her flowers were taller plants that produced tealeaves. They made a charming background to offset the yellow, orange and purple of the fall flowers. There was magic here that she raised. She pinched leaves from the Florence Tea bush. She knew it was old fashioned to raise her own tea, but drying these leaves seemed to taste so much better and less bitter.

“Oh my god, here comes the new guy from across the street. How come they didn’t make men like him when we were young?”

Stella looked up at Virginia’s words and saw the new neighbor approaching. Indeed, the young man was too beautiful to be called good looking. He was the type that appeared on the front of romance books, well over six-feet, with wide shoulders and narrow hips.

He had his long blond hair pulled back in a knot at the back of his neck, and his green eyes seemed to flash fire. The tight shirt he wore did nothing to hide the muscles that rippled down from chest to the low hung jeans.

The long legs that filled the blue denim material moved smoothly with each of his strides. Stella felt a response that surprised her. She felt a sexual heat that she hadn’t experienced for years.

Virginia stepped out between Stella and the young man. “Hello, Mr. Eleg, or can I call you, Micah?”

In a deep voice that sounded like low music, he answered with a smile. “Please call me Micah. I will call you Virginia, and, Ms. Highlan, if you don’t mind, I will call you Stella.”

Stella found him polite and strange, almost like he came from a different age or a different place. Young people didn’t seem to be polite now. They just hurried along looking at their phones.

“You have a magic touch with the earth, Stella. Look at the blossoms so late in the year.” His voice was soft as he spoke of the flowers.

She was surprised that he was kneeling on the wet earth beside her. She could feel something pouring from his body—was it electricity, heat?

Virginia cleared her throat, always needing to be the center of attention. “So, Micah, you like flowers?”

He stood back up. “I like tea. I couldn’t help but notice Stella’s oriental tea plants. I recognize many of the varieties. I have brought Stella a sample of my own blend.”

He looked down at Stella. “I have noticed you have been feeling some stiffness.”

He held out a hand, and Stella couldn’t refuse it without being rude. Had he been watching her as she worked around in her yard? It gave her an uncomfortable feeling. As she stood, he pulled out a brown cloth bag from a pocket in his jeans she would have sworn were too tight to hold anything.

Putting the bag in her hand, he spoke directly to her. “Drink some each night before going to sleep. It will let you rest comfortably, and your stiffness will ease.”

Virginia pushed around so that she was between the two of them. “I could use some of that.”

As Virginia reached for the bag that was in Stella’s hand, Micah intercepted her hand and brought it to his lips. “No, no, Virginia. Each brew is made magically for each person. I will make something sweet for you. Ladies, I will leave you to your flowers.”

Both ladies watched the young man go back across the street.

Virginia fanned herself. “I need to go home and take a cool shower. Let me know how that tea tastes.”