Gabriela Swanson wanted one thing, to be a well known writer at Graven, the most prestigious Goth magazine in the country. When an inside source gives her the opportunity of a lifetime, she finds herself in a hostage situation with a man who claims to be her soul mate.

Kane Barringer is a vampire who's lived for centuries. Every century is spent waiting for his soul mate, but this time he's vowed to live the rest of his existence without her. A strange twist of fate gives them the opportunity to be together forever, but will Gabriela embrace it? 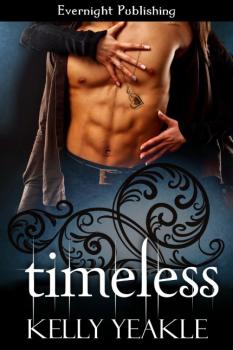 1.Review at The TBR Pile
Posted by thetbrpile.weebly on 10th May 2011

The book moved at a quick pace but at a rate where readers were still able to follow the plot. I gave this book a rating of 4 instead of a 5 because of the reminiscent factor. I feel that maybe Ms. Yeakle could have made this story a little less like all the other vampire/human love stories out there. It was only a 3 for the heat level because there could have been a little more steamier love scenes, they were on the tame side. Though I found the book to be reminiscent of a few vampire books, Ms Yeakle is a talented writer and I would definitely recommend her books to fellow readers.

Who knew just one blood heart necklace could change so many lives, but mostly Kane’s and Gabby’s. All they had to do is stay alive to enjoy the benefits. The Under World wants them gone.
Timeless by Kelly Yeakle was quite intense right from the first chapter. And even though this is my first Kelly Yeakle book, I can guarantee it will not be my last.

The flow was amazing; every time I turned the page it was yet another opening to learn more about the hero and heroine as well as the second level characters. Gabby is one lady that can take a lot of crap and still stand on her own. Truly her strength just floored me.

Kane, one very hot vamp, traveled through time only to learn of heartache again and again Ms. Yeakle gave us a vamp with a soft side but is what she puts Kane through too much for this Vamp?

The draw for me is Gabby’s and Kane’s timeless love for one another, time after time pulled back together for life and death.

The second level characters just blew me away, kudos Ms. Yeakle for creating such interesting additions to Kane and Gabby’s past.

You have Maggie, full of spirit fire, that needs her own story {hint}. David, truly sweet, and quiet Nicolette… what a handful. Then there are Chadwick and his wife Kelina, these demons were an awesome addition.

I need to know, will there be more books related to this one? I can all but taste more…*grin*

If you enjoy a pleasurable paranormal time travel with a lot of butt kicking, then pick-up Kelly Yeakle’s book Timeless.

I enjoyed this book, it is a timeless love story with a paranormal twist. You have Gabriela and Kane, they meet and fall in love. Supposedly end of story. Gabriela is in possession of a bloodstone quartz heart necklace that her grandmother gave her. She has never taken it off.

While following a lead on a story for the newspaper that she works for she meets up with Kane…a coincidence, not likely. This is definitely a timeless love story in more ways than one. They end up getting in a life or death race between vampires and demons, hoping that Gabriela's memories of her past lives with Kane can shed some light on what has turned the underworld topsy turvy.

“Where are we going?” I asked Kane as he pulled me along up the large hill. If not for his strength, I would have fallen numerous times thanks to the wet grass. “I’m serious, my legs hurt.”

“Stop whining.” His tone was playful. “We’ll be there in less than a minute, and I promise it will be worth all the pain you’re feeling now.”

“Easy for you to say, you’re immune to human exhaustion.” Before I could stop him, Kane scooped me up into his arms and continued moving at a brisk pace up the large hill.

I was glad because unless there was a million dollars or my freedom on the other side of the hill, there wasn’t anything, in my opinion, worth the soreness I’d experience later. Even though Kane carried me the last few feet, I still had to walk back to the house when we were through with whatever he had planned. There was no way he was going to carry me the entire length back.

“Close your eyes.” Kane told me as we approached the top of the hill. I gave him my best you’ve got to be kidding look, but he just smiled. “Come on, humor me.”

At this point, what did I have to lose? I was pretty sure Kane hadn’t brought me out to the middle of nowhere to off me. I’d given up on thoughts of him harming me before we ever left his warehouse. I closed my eyes and waited. We stopped a few seconds later and Kane set me down on the ground.

“Okay,” he said excitedly, his voice more animated than usual while turning my body so I was facing a different direction. “Open your eyes now.” I could hear the smile in his voice as he said the words, and it made me feellike a child waiting to tear into a present.

I opened my eyes slowly and felt the rush as my breath escaped my lungs. Even under a sky of dark gray clouds, the clover field seemed to be illuminated. The ground below us, on the other side of the massive hill we’d climbed, was a luscious covering of clover with its tiny purple blossoms dancing in the light breeze. I wanted to take my shoes off and go running through the field, knowing the clover would feel soft against my toes.

“I’ll race you.” Before I knew what was happening, Kane was darting down the hill. I knew he wasn’t going as fast as he could, but it was funny to watch him try to be slow like me. I slipped out of my socks and sneakers, holding them in my hands as I chased after Kane. I would probably end up with a nasty cold from running barefoot in the wet grass, but I couldn’t resist.

I dropped my shoes at the bottom of the hill so I could focus more on catching Kane, and less on trying to run while holding my shoes. We were frolicking like school children, running in all directions throughout the clover, when I saw a sight that had me stopping dead in my tracks. Just beyond the field was a forest of pine trees, small ones about the size of Christmas trees. I turned in circles, taking in everything around me, knowing with all my heart that I’d been there before, not just in the dream I’d had on the plane, but in real life too. Kane stopped running and turned to look at me. He was waiting for me to say something about our surroundings, but I couldn’t put into words what I was feeling inside.

The tears spilled down my cheeks. It was a natural reaction to the overwhelming feelings that were surging through me as the clover swished against my toes. This was not only a beautiful place, but a sad place. It was where Rolando had taken Kane from me for the first time, and in every lifetime, I lost him again as I met death.

Kane moved silently and wrapped his strong arms around my shoulders in an attempt to comfort me. I leaned back into him, allowing his closeness to soothe over the ugly feelings that were trying to surface from my thoughts of death and loss.

“Why would you bring me to such a sad place?” I asked, choking down a sob.

“This is home, Gabriela.” He ran his hands down my arms.

I turned my body so I faced him. “Where are we? No jokes, no riddles.”

“I told you, we’re home.” Kane placed a strand of my hair behind my ear. “In all our times together, I like your hair this way the best.” It was off topic, but I still found it flattering.

I refused to let him change the subject that easily though. “I said no riddles, Kane. Where is home?” I crossed my arms over my chest and tilted my chin up so I could see his face better.

It clicked. Maggie’s accent and the subtle way Kane sometimes enunciated his words, though his dialect was weak compared to hers. No wonder we had been on the plane for such a long time, we’d traveled across the entire Atlantic Ocean.

“This is your home, where you’re from?” I continued to look at him, trying to see if there was anything in his eyes he was leaving unsaid.

“Our home. This is where we first met all those centuries ago. Our families were good friends, and we grew up together. We played here in the clover fields a lot, even as teenagers. We had our first real kiss over there among the pine trees.” He smiled at the memory, and as the scene played out in my head I smiled, too.

“Playing hide and seek,” I said after I realized I was sharing his mind. “You snuck up behind me, and when I turned around, you kissed me.”

“That was it for us. We were inseparable after that day. Our parents were planning our wedding when Rolando showed up.” I cringed at the mention of his name, remembering the vision I’d had and how cruelly he’d made me watch as he bled Kane among the trees and then fed him his blood. “If it weren’t for your love and devotion, I would have been a ruthless killer. Our love saved us, Gabriela. Can you understand why I’ve been unable to let go? It doesn’t matter how long I have to wait for you. You’re my reason for living, for continuing on in this bleak existence.”