Toys, Sex and Other Ways to Spice Up Your Life

Max Harder long suspected that his ex-girlfriend, Callie, had broken up with him because of another man—her best friend, Tom. In an effort to understand Callie better, Max befriends Tom, and a new friendship is forged. Max sets in motion their plan to show Callie she doesn’t have to choose between them, and that her wildest dreams can come true.

But when Max’s pet capuchin monkey falls ill, their love-lives get turned upside down by more than sex toys and wild fantasies. The pair discovers that family comes in all shapes and sizes, and love is the key spice in the recipe of life.

Toys, Sex and Other Ways to Spice Up Your Life

More From The Harders

Celery, Sex, and Other Good Things for the Heart
Kellie Kamryn
In Shelf
$3.99

Toys, Sex and Other Ways to Spice Up Your Life
Kellie Kamryn
In Shelf
$3.99

Vows, Sex, and Other Ways to Celebrate Love
Kellie Kamryn
In Shelf
$1.99
All Books In Cart
All Books In Bookshelf
Excerpt

“Hey, Callie. How are you?” Max Harder cleared his throat in an effort to keep calm as his palms began to sweat at the silence on the other end of the line. Play it cool. At least she answered.

He remembered he had to be the strong one. He let her run from him the first time, and he wasn’t about to let her get away again. He decided to break the ice with his sense of humor. “Ya know, the other day I was thinking of you and…Cuteness!” He shouted the last word.

A muffled snort reached his ears, and he swore he heard a giggle. Max smiled to himself, picturing her blue eyes sparkling with mirth as she tossed her blonde hair over one shoulder. That had been his tactic every time Callie’s fears and insecurities got the better of her. The outburst caused her to laugh and shift gears, opening the door for communication between them.

Callie sighed. “What do you want?”

A more friendly tone. Promising. “I called to talk. I’ve missed you.”

She misses me too, but can’t admit it. Might as well start with the truth. He blew out a quiet breath. “I want to talk about why you broke up with me.”

“As I recall, you thought it was a good idea. You said we wanted different things.”

He could hear the defensive note in her voice. His ego wanted to latch onto that, whisper sweet nothings in his ear about how she’d broken it off with him, how she didn’t deserve his love, or that he should walk away before she could break his heart. But he knew her anger was often a defense mechanism when she didn’t feel safe. Setting his ego and personal frustrations aside, he reminded himself how much he loved her, and that if he didn’t give them one more chance, he would always wonder what if?

Truth be told, he knew why she’d broken off their relationship—another man. Tom Lexar, a prince of a man, with a big heart and a fierce love for Callie that even he could feel the first time they’d met. Tom and Callie had known each other since grade school, and Max knew in his heart he couldn’t, and wouldn't, compete with their friendship. Tom hadn’t given any indication that he wanted anything more from Callie, but Max’s intuition told him that something had changed for Callie.

At first he’d been upset and even thanked his lucky stars they hadn’t invested more time into their relationship when she had another man in her life. And if he’d continued to feed his anger, he could have kept telling himself that lie.

Max had hit it off with Tom the first time they met. Unbeknownst to Callie, they’d gone out for beers a few times together. Only an idiot would’ve miss the way Tom cared for Callie too, and the two of them had bonded over sharing stories of her. Max had decided that love was never a bad thing. He knew in his heart he couldn’t deny Callie a friendship she held dear, nor would he ask it of Tom. It had taken him some time to admit that he would never make her choose between them. He needed Callie to open up to him about it, though, so they could have an honest conversation about what she wanted and whether or not Max could give it to her.

Max’s instinct told him to let her vent. Then maybe they could get down to the nitty gritty of things. “All right—give it to me,” he stated.

“Pardon?” Her bewildered tone told him he’d caught her off guard.

Good. A man needs some kind of upper hand. “Give it to me. I want all of it.”

“Give you what?” Her voice rose an octave. “If you’re talking sex, Max, you have some nerve calling me and—”

He interrupted. “It’s not about sex, and I hope you know me better than that. If you’re pissed at me for some reason, I want you to tell me why.”

A long pause followed. Max knew enough to keep quiet while she formulated a response.

“Listen here, you smug son of a...” Her voice trailed away.

Callie huffed into the phone. “You are such an asshole, you know that? I can’t even be mad at you.”

“And you said it was for the best,” she retorted. “You didn’t even try to stop me.”

“Is that what you wanted?” he asked. “For me to tell you all the reasons I thought we shouldn’t break up?”

“Bullshit. Yes, you can. We can talk. I know there is something you’ve been wanting to tell me, and I love you enough that whatever it is, I want to hear it.” He cleared his throat. “I want us to have a chance to clear the air, and I think we deserve a second chance. Don’t throw away what we had, Callie. Not without really telling me why.”

He huffed out a breath at the end of his speech. Max’s pet capuchin monkey, Scottie, sat on the couch beside him, cocking his head, staring at Max with big, round eyes. Max gave Scottie a thumbs-up as if the little monkey knew how important this was to him.

“Why don’t you come over to my place and we can talk?” he suggested, his tone gentle. “You can say every single thing you’ve wanted to get off your chest in the past few months.”

“What’s the catch?” A note of suspicion tinged her voice. 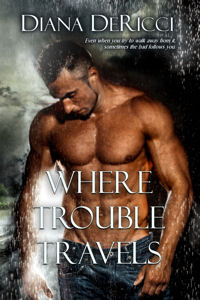