Keeper of the Land 1

The discovery of a wounded unicorn on his father's farm sparks a series of events Logan couldn't even fathom in his wildest dreams. Through this unicorn, he is confronted with sexual suggestion, magic and the promise of power. Logan and his brother Blake are quickly plunged into a world consumed by greed, lust and revenge. A world dominated by an ancient war between the unicorns and the centaurs. Can Blake save his brother from the unicorn's grasp before it's too late? Or more importantly, can Logan see what is happening to him as he is subjected to more and more unicorn magic?

Keeper of the Land 1

More From Keeper of the Land

Like a horse would care for a new-born foal, Aidenock licked him. He moved his tongue across Logan’s body, covering him in his fluid. He pressed his power into him with every caress of his tongue. Logan shuddered with every movement he made. He groaned with pleasure, feeling at one with Aidenock, even more so than the ride last night.

Logan’s body sung, ignited by the supernatural power he lavished upon him. The skin he had worked on glistened with saliva, illuminated and charged.

His fluid soaked into his skin, invaded his pores. The residue, once absorbed, was his magic shimmering across the surface of his flesh, just as it was with his coat that glowed even in the dark. Logan could see beyond the stable, beyond the day as it was. His mind, if he chose, could turn to anywhere in the lands surrounding his home. The spring he bathed him in last night, the grove of banksias where he first met him and the fields and hills beyond. It was as if he could fly, soaring without wings, his mind not burdened by his body.

Now you know what I can see. All of the time.

“I never want to be away from you.”

The journey isn’t over yet.

Logan moaned with delight and Aidenock continued to massage him with his tongue. His breathing was now fast and deep as he became more and more intoxicated with his power.

Aidenock then transformed his magic, the level of energy he injected into him changing in pitch and register. Once more it jolted him. His body shook, violently at first, as he lay on the bedding straw, fortunately cushioned by the soft surface.

Then, as he adjusted to this new dose of magic, he became aroused by the effect of the energy it had as it swarmed through his being.

But he didn’t answer.

Aidenock kept working his magic upon his flesh. Logan didn’t mind, he just didn’t expect the result this new degree of magic would have on his body. If his stomach only turned before, now his whole body vibrated in sensual delight, tingling, scintillating and numbing him with delight. He was in heaven. He was powerful.

His foreskin slid back when he became more and more aroused and the unicorn continued to caress his skin with his tongue unabated, touching his hardness. Involuntarily, Logan quaked in raptures of ecstasy. He was washed with wave upon wave of Aidenock’s power melting inside him. His body suffused with pleasure, both physical and mental.

Logan’s mind, out in the fields and soaring across the landscape, returned. Aidenock’s new pulse of power drew him in, like a fisherman would a freshly baited fish.

Nearly there, my dear sweet love. Then our bond will be complete.

He let out a cry, screaming until he had to gasp for air. But it was not a cry of pain, rather of joy. Logan’s senses hummed and upon the release of his inhibitions he was able to comprehend Aidenock’s intentions. His magic soaked flesh, the skin that kept him in and surrounded him, was now just like his. He felt as though he could take on anything, an immortal and as powerful as Aidenock. He felt just as he must feel. He loved it.

He then knew, beyond any doubt, that there was a bond between them. He had been touched so intimately, unlike anyone or anything had touched him before. Logan, with one final jolt, as he finished caressing his flesh, and in an explosion of rapturous ecstasy, covered himself in his own fluid. Aidenock licked it off him.

Logan lay and stared at the stable ceiling for a long time. Aidenock was quiet beside him, whinnying into his ear when he turned to look upon his beautiful face. Then, ever so slowly he got to his feet. His body, drenched in his saliva, was cooled by the afternoon breeze that filtered through the stable.

“I would do anything for you, Aidenock,” he said, smoothing his hands over his body, feeling the remnants of his magic tingle his fingertips. “I would even kill for you.”

Now, finally, it is all understood. 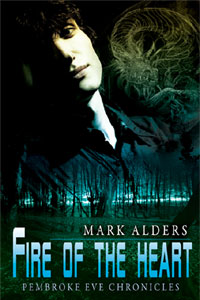 Heart of a Hero (MM)
James Cox
In Shelf
$3.99
Tweets by
sirenbookstrand