Steven is tall, dark, and damaged. He doesn't let anyone close, comfortable on the outside of normal life where he can hide his scars behind a wall so high that nothing gets through…except them. Despite a childhood marred with black and blue, he's survived and moved in with his two best friends, Sam and Charlie.

Life should get better, but it was Sam who held him when the dark threatened to swallow him whole, Sam who gave him a place that felt like home, and Sam who knew every scar and every broken place.

And it's all been taken away with Charlie sharing Sam's bed.

Without his former comfort, Steven realizes what's been hiding in the deep corners of his heart, and the truth sinks him like a weight. He’s in love with one or maybe both of his roommates. Navigating unrequited love tears Steven apart and brings him to the precipice, and he has to choose: his feelings or Sam’s…and Charlie’s?

My head was heavy, and I let it fall back against the couch just as I felt Charlie’s soft lips on the base of my throat. I extended my neck, giving her room to play, as my eyes lulled half closed. I wanted more of Sam's touch. His fingers slid up my arm, almost hesitantly, until they reached the buttons on my shirt. Slowly, he undid the top one. I turned my face toward him and met his eyes in the dim light, watching him lean forward to brush his nose over mine.

What would Charlie think if we kissed? Would he even? My thoughts were interrupted by soft lips and harsh stubble against my clean-shaven cheeks. His lips glided over my unmoving ones, and Charlie vanished. My eyes fell the rest of the way closed, and all my thoughts were on him as he tilted his head and pressed in closer. His warm tongue slid over the seam of my lips. Mine parted instinctively, and I inhaled my first breath of him. He tasted like cheap tequila and chlorine, like the way he smelled after a long night of drinking. It was home.

The tip of his tongue flirted into my mouth as soft fingers with an edge of nails smoothed over my chest. It felt surprisingly good, and I knew they must belong to Charlie since Sam's hand was still on my thigh. He took my hand and slid it further up his leg until the tips of my fingers brushed his bulge, eliciting a moan from his lips. I moved my other hand to Charlie’s hip, and her face dipped to press a kiss to my nipple.

Sam broke the kiss, and I could just make out his swollen lips in the low light. He smiled at me and moved his mouth to my ear. He nipped and sucked at the sensitive skin before I felt his hot breath fanning down my neck.

My head snapped around almost colliding with his, and my hand tightened, nails biting into his thigh. My brows rose, questioning his meaning.

"I do," he said again, so soft that I almost believed I’d imagined it.

Tiny fingers worked on my belt, and my head was all over the place. My cock swelled between my thighs, hard and painful, and it was taking all the blood from my head, making it nearly impossible to think about what he had just said.

I leaned forward and pressed my forehead to his, forcing myself to think. "How long?" I whispered as I felt Charlie's soft lips where the button of my jeans had once sat.

Fuck, fuck, fuck. I couldn't be having this conversation right now. She used both hands to slide my jeans down a bit, and her lips moved lower.

Sam didn't respond. A low baritone growl sounded in the back of my throat.

He shook his head, his forehead still against mine. "Later." His eyes pleaded with me.

I sighed, and he pushed my hand to cup his package. I groaned. He was big and thick, everything from what I remembered when I had glimpses of his morning wood. I suddenly wanted to touch him, to have my mouth on him like Charlie did me. My thumb stroked over the edge of his head, through his pants, and he was kissing me again. My shirt was pushed off my shoulders by one or both of them, and Charlie moved to straddle my lap. She joined the kiss, adding the taste of that cherry flavored alcohol she liked to mix. I didn't expect to like it, but I did. Anything with Sam would have been good. 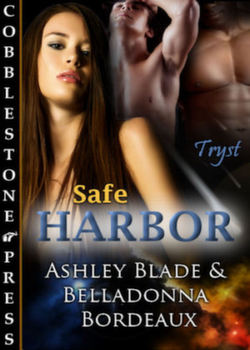 Her Men (MMF)
Sam Crescent
In Shelf
$3.99
Tweets by
sirenbookstrand