A freak storm opens up a mysterious undersea world to Frankie Fontana when he gets thrown out of his boat and almost drowns. Later he learns he’s been miraculously saved by a naked man lying beside him on the beach. He is wrapped in seaweed, has no clothes, no name, and no home. Beneath a tropical moon, they make love.

Later Frankie’s life is thrown into chaos when he learns he’s fallen in love with a merman named Narcisse. He finds that his affair with Narcisse offers problems since he’s actually half fish, and is always disappearing. Finally, he learns that Narcisse has broken some undersea rule about mating with a human, and a sea witch throws him on the beach, dead.

Thinking he’s lost Narcisse, Frankie tries to live his life without him. Is Narcisse out of Frankie’s life forever, or do the two meet one more time, and what is the magic that brought him back from death?

Kelly Conrad is a Siren-exclusive author.

Slowly Frankie’s eyes shifted back at the handsome, long-haired blond with the sea-green eyes. He slowly allowed his gaze to travel down Narcisse’s body from his strong, dimpled chin to his well-developed legs, and then up again. When he reached Narcisse’s eyes, he saw something that made him turn his face away quickly.

“What’s wrong?” Narcisse asked and then looked down at himself to see what Frankie saw.

The silence between them stretched into what seemed like an eternity, until Frankie said, “Forget it. You don’t have to go if you don’t want to.”

“Look,” Narcisse said. “I’m sorry I yelled at you, but this has been coming for a long time, and you know it. Frankie, instead of going to a bar and getting drunk, you’re going down to that gym and working off your feelings with weights and energy drinks. You’re jumpy and—”

“Look, I’m not getting mixed up with a friggin’ merman who’ll only be around a few weeks out of the year.”

“Is that why you turn your eyes away every time I find you looking at me?”

“No, you don’t look. You stare! You salivate! Hell, Frankie, you watch the way I walk, eat, talk, and even dress. I caught you just the other day watching me when I was in the shower.”

“I came in by accident.”

“Don’t give me that bullshit. You didn’t come in at all. You just stared through the door like some fuckin’ Peeping Tom. When I caught you, you said, ‘Sorry, I thought you were through.’ We both knew you were lying.”

“It’s just…well, except for the night on the beach, it’s been a long time for me. My last relationship ended when you came into my life. I had a hard time with it at first, but when I met you… Hell, now I can’t even think about anyone else.” He turned and stared at Narcisse angrily. “But if you think I’m getting mixed up with some creature from the black lagoon, think again.”

“Who asked you!” Narcisse shouted and turned away.

Frankie looked over at Narcisse, his heart bleeding for the way he was treating him. “Hey, I’m sorry. It’s just that you and I…it wouldn’t work. You’re different. It would be doomed from the very beginning. I don’t want my heart getting torn from my chest every time you have to leave, or…God forbid…die from some kind of weird disease you get in the ocean.”

“Don’t give me that crap. If you eat that stuff in the ocean, no telling what you ingest on a daily basis.”

“Well, it couldn’t be any worse than your beef stew.”

Frankie turned and looked at him. “What’s wrong with my beef stew?”

“Nothing, except you can ride it in the morning and eat it at night.”

That infuriated Frankie, so he turned and walked up to Narcisse intending to break the guy’s neck, but when he faced him, he was powerless. Magic? No. It was something else. Almost immediately after looking into Narcisse’s sea-green eyes, something flooded him that pushed the anger out and replaced it with the hottest, most insane desire he’d ever had.

He grabbed the back of Narcisse’s long-haired head, pulled him closer, and kissed him. As their lips fused, Narcisse responded by clinging to Frankie and pressing himself against him. This excited Frankie. He wanted a fuck bad. He wanted to feel Narcisse, so his hands, almost with a mind of their own, explored his neck, his shoulders, and his back. His fingers worked every line, every curve of his body, but it wasn’t enough. He ached to feel his hands on Narcisse’s bare skin, so Frankie reached beneath his clothes and sighed when he felt the other man’s naked body. Becoming even more excited, he rubbed his cock against Narcisse’s and found it hard, and getting harder. But instead of Narcisse being worked up, and as cock-hungry as he was, he pulled away.

“You want it. I know you do,” Frankie whispered breathlessly.

“So what? You just told me you didn’t want to get mixed up with me. Make up your mind, Einstein.”

“Maybe I’ve changed my mind,” Frankie whispered as he grabbed him and kissed him again.

Frankie knew Narcisse’s game. He wanted Frankie, but he didn’t want to give him the satisfaction of knowing it. He covered Narcisse’s mouth and body with his own but looked up, frustrated, when he pulled away again. Frankie reached out for more, but Narcisse wasn’t giving. Instead, he took his time undressing. He watched Frankie as if he knew he was tempting him beyond his endurance.

Frankie tried to be patient as he watched Narcisse slowly undress like the most seasoned stripper.

And then their eyes met, with Narcisse teasing him with those sea-green eyes, dropping one article of clothing, and then another, until the last article of clothing swung out from his hand, and Frankie, full of frustration, caught it.

With each of them pulling it in a different direction, Frankie once again had Narcisse in his arms, looking down into that hypnotic face that emitted a coolness, and a dare.

Suddenly his head jerked back around and looked hard at the man who was now lying on the beach with two legs. When he had seen him before, he had a fish tail and was half-man and half-fish. He had appeared during the worst of the storm, and with his hands flailing, seemed to be directing the storm. Frankie’s gaze lowered to the man’s legs, and he wondered if he’d been hallucinating.

If not, where was the other boat that would have carried the man to his rescue? When his curiosity finally got the best of him, he lifted himself up on all fours, crawled over to the sleeping man, and took a good look at his face. His skin was a pale pink with lips appealingly shaped. His chin was dimpled, making Frankie think he must be very young. However his facial structure seemed to be strong boned, his chin jutting into stubbornness and determination. The drops of ocean water looked like liquid diamonds sparkling in the moonlight as they slowly crept down his shoulders, on and on until they reached his beautifully trim stomach muscles.

His hair was long and flowing, but several strands in front were braided and mingled in with the rest. His body was as perfect as any Frankie had ever seen, but his face was mysteriously familiar. Frankie knew only one thing. If he wasn’t completely crazy, this man looked exactly like the creature he’d seen—except he had two legs.

As Frankie looked at him, he felt as if he was being led by something outside himself when he lifted a wayward hand and touched the man softly at first, feeling his fine, smooth skin. His gaze raked over him, noticing how very handsome he was while his hand continued moving down his naked body to his cock that was covered by seaweed. Frankie knew he would never do this normally, but now he seemed to be following some kind of deep need inside himself. Reaching out, he removed the seaweed and saw a big piece of cock meat that impressed even him. Now it was limp and unmoving as it lay snug and comfortable in a nest of darker-blond hair. For some reason he longed to see it twitch, so he touched the sensitive head and was rewarded with a healthy movement that excited him. As he moved himself down toward it, he put his nose close to the man’s skin, and the fresh aroma of the salty ocean filled his nostrils. By this time, a deep, wanton feeling flooded him, and he wanted to eat it, but as his tongue licked his lips in preparation to take it into his mouth, the man moaned in his sleep and moved. The sound knocked Frankie out of the dream he seemed to be having, and he looked up at the man and then moved upward until he was directly over him looking down into his face.

While Frankie was feeling a need to taste his lips, the man opened his eyes, and Frankie felt a jolt. His eyes seemed to have a power, and although the color was a soft, alluring sea-green, when he saw them staring at him, there was nothing soft about them. They were strong, piercing, brilliant, and intense—as if they could direct a storm at sea. Suddenly the man reached out, grabbed Frankie’s head, pulled it forward, and kissed his lips. This unbalanced Frankie, and he fell on the man who rolled him over and began nibbling on his neck. With an errant hand, the stranger tugged at Frankie’s pants and then reached down into his jeans and grabbed his cock. Moving downward, he took it into his mouth, sucking it frantically and causing Frankie to cry out with delight.

Oh, God, Frankie had never felt anything like it. It was as if this stranger’s mouth held some kind of stormy magic, but the experience was one of ultimate joy, a splendor such as he’d never known before. It grabbed him, laying him helpless beneath its strength. He felt uninhibited, uncaring as he reached and grabbed the man’s head, his movements frenzied as he pushed his cock in and out of the stranger’s mouth. It was an unrestrained, out-of-this-world feeling he’d never known before, and he was firmly in its grasp. He felt the storm inside him, the waves, the wind, and he knew for the first time he was in the grip of some sort of erotic storm, and it had control of him. 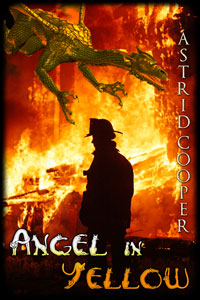