Madeline cannot believe she begged a man to make love with her, then agreed to his proposal to save her pride and get even with her ex. And worse, even with her newly broken heart, she falls in love with him. Just as Madeline begins to believe Wolf has feelings for her, her ex shows up and reveals the truth behind Wolf's intention.

All Wolf wants is to convince Madeline that her ex-fiancé is a fool for letting her go and that she is indeed beautiful. But when he feels her body move against his, he realizes he wants more than to help soothe her hurt pride. Now that her fiancé is out of the picture, Wolf's not going to let anybody in Madeline's her life other than him.

Will Wolf do whatever it takes to keep the woman he loves, even if it means lying and hiding his true intentions? If so, will Madeline entrust Wolf with her already shattered heart despite his deception? 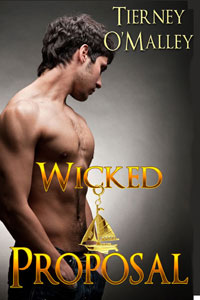 There was something in his gaze, but she couldn't quite grasp it. Concern. Yes, that could be it. After all, he was a brother of her friend trying to console her, to make her feel better because a member of his gender hurt her.

"You have no idea how powerful your charm is, do you?" Wolf said in a soft tone that caressed her stomach.

Beautiful and perfect. Now I'm charming. "You think I have a charm?"

"And you find me attractive."

Was he telling the truth or it was his nature to be kind to any woman he found crying in the dark. "Are you being honest right now?"

"Madeline, I am telling you the truth."

Madeline took a deep breath and met his stare. "So if I ask you to make love with me right now, you'll do it." It wasn't a question but a challenge.

Wolf raised his brows, then blinked as if trying to remove something stuck in his eyes "I beg your pardon?"

She knew it. The you-look-perfect-charming-and-pretty bit was a lie, an attempt to make her feel better. A joke. Reality bit her hard and it hurt. Madeline bit her lower lip to stop from crying. The effort didn't work. She looked away as fresh tears rolled down her cheeks. This time she didn't bother wiping them. Edward hated it when she cried. And Wolf would probably swim on the cold Puget Sound water just to get away from a crybaby like her if he wasn't Diana's brother.

Wolf's finger touched her chin, forcing her to look at him. "Madeline, look at me. I'm not sure I heard you correctly."

"Yes, you heard me right. I asked you to make love with me. You said I'm attractive. I wanted to know if you're lying."

"I know. It was an irrationally stupid question."

"Don't get me wrong. You're very attractive, but--"

"Madeline, your question surprised me and--"

"Having sex with a woman with rough hands from cutting stems never crossed your mind. Don't worry, I'm not mad. I put you on the spot. That's not very nice of me. It's just what you said challenged me. Now I know the truth."

"You're only being kind to me because I am Diana's friend."

"Stop. We're just going around in circles. Besides, it doesn't matter. Edward broke up with me because he realized I'm not attractive and interesting. I can accept that."

"Ignore what he said and stop belittling yourself."

"Wolf, I'm dispropor--" Warm hands cupped her face, preventing her from moving her head even an inch. "What are you doing?"

Before her mind could process what he was up to, his lips crushed hers. Surprised, she did nothing but look at his closed eyes.

"Close your eyes, Madeline, and open your mouth."

"But you're shutting me up, hmm…" Whatever it was she wanted to say left her brain when Wolf's swift tongue plunged and explored every recess of her mouth, leaving wonderful tastes of wine and man. Like a hot drink going down her throat, his touch and kiss warmed her body. Giving herself freely to the passion of his kiss, she began to relax. She should stop him, but like an ice cream on a hot sunny day, she wanted one more lick. There was something in his kiss. Like fire, it quickly consumed her. Countless times in the past, she imagined how it would feel like to be kissed by him. Now she knew. It was like soldering heat that joins metal.

Madeline closed her eyes. Her senses quickly zeroed in on his hands against her cheeks and…heavens, the hard pulsing cock pressed against her hipbone. She flattened her hands on his chest. Warm and hard, his chest muscles flexed every time he moved. He felt good beneath her palms. While her need to be touched grew stronger, her knees felt weaker. She felt intoxicated and…god help her, lusty.

Drunk from the heady sensation, Madeline captured his exploring tongue and sucked him gently. The groaning sound he made encouraged her to get bolder. She wrapped her arms around him and closed whatever small gap was left between them.

"Madeline, you taste so good, better than an expensive wine," he whispered. "I could kiss you all night." He gripped her hip and pulled her tight against him.

"You're just saying that to make me feel better." She felt him pulse against her belly.

"Will you stop and believe me when I say you're a very attractive woman?"

Hearing the word attractive again, she ended the breathy kiss. "I wish I could believe you."

"What can I do to make you believe me?" "Make love with me."