Miria, a young noblewoman on the cusp of an arranged marriage, meets the Ausir Tsalrin, her father's mysterious assassin, and sparks fly immediately. Tsalrin is trapped by an ancient curse, and Miria cannot escape her father or the husband to whom he would sell her, a man who sees her merely as a political tool. Miria and Tsalrin's position is impossible, but neither one will give up their hidden love. Theirs is a story of struggle against abuse, bigotry, and paterfamilias. Their love is both their greatest danger and their only comfort as they search for their mutual freedom.

Be Warned: physical abuse of heroine.

Worth His Freedom
Adonis Devereux
In Shelf
$5.99

Bride for the God-King
Adonis Devereux
In Shelf
$5.99

Miria wanted to touch Tsalrin's face, but her hands were still imprisoned in Tsalrin's grasp. “I want you to be free of your servitude, to be free of that collar. Tell me how to help you.”

“Why? Would you do so much for any of your other slaves?”

Miria despaired. Her journey here, her intimate preparations, everything was vain. Tsalrin did not trust her at all. “Then I will go.” Miria wrenched her hands from Tsalrin's. “Stay here all night if you like, but I am leaving. And tomorrow I return to Nirrion. I do not want to be here if my presence is nothing but pain for you.” Her breast heaved, but she refused to cry in front of Tsalrin.

“No. Stay.” Tsalrin rose, too, and he pulled Miria to him. “Forgive my coldness, Lady. I have been alone for so long that I have forgotten what kindness is.” He kissed Miria's lips then, and if his earlier kisses in her father's cellar had been wine, this was fire.

Miria lost her breath in Tsalrin's kiss. Her knees trembled. She clung to Tsalrin's neck, and when his tongue pressed forward, she opened her lips to receive him. She pressed her body against his, and felt the rising of his phallus against her hungry flesh.

Tsalrin thrust his hand into her hair, pulling her head back, baring her neck. His kisses, fiery sunbursts on her skin, trailed down from where her pulse thundered in her throat, down to her breasts, with their hard and aching nipples. Tsalrin pulled back from Miria at that moment.

Miria could not speak at first. She nodded instead, but as Tsalrin pulled his gloves off, to give his hands full play of her body, she managed a whisper. “You will have to tell me what to do. I have never done this before.”

“Never?” The light in Tsalrin's eyes altered; he did not desire her less, at least Miria did not think so. She thought that, if anything, he wanted her more. She did not understand the difference, but she did not have long to think of it. Tsalrin unhooked the clasps that held her gossamer gown in place, and she was naked before him. She was not embarrassed, however, as she had been when Hedda had shaved her. No, Miria was burning with desire, with a need for which “desire” was too weak a name. She fumbled with the strange buckles that held his breeches in place, and Tsalrin helped her. He was as naked as she, excepting only his collar and the broad, gold bracelet on his left wrist, and she surveyed the contours of his body, the muscles of his chest, the curve of his strong calves; but she did not let her eyes dwell too long on his upright phallus. Instead, she fixed her gaze on his face.

Tsalrin laid his lips on hers again, and she kissed him with all the awakened passion in her soul. Her innermost womanhood ached, and Tsalrin laid her flat on the bed. His roving hands passed from her throat to her breasts, and the feel of his warmth on her sensitive nipples caused her to moan. His pressure on her breasts increased, until Miria was writhing on the bed.

“Please,” she said, but she did not even know what she was asking for. She slid her hands through his hair, through the inky smoothness of it, and then her fingers touched the rounded nubs of his sawn-off horns. She looked up at the alien face of her lover, at her horned and ancient lover, and she could not breathe.

Tsalrin touched her smooth mound, and the sudden heat from his skin was a fresh wave of sensation. He slipped one finger inside her, then two. The swift motion, back and forth, against the center of her blossom sent shivers throughout her body. The feeling built and built, until Tsalrin took his hands away, and Miria gasped. The ache consumed her, and she pulled Tsalrin's face toward hers, pressing her lips to his. 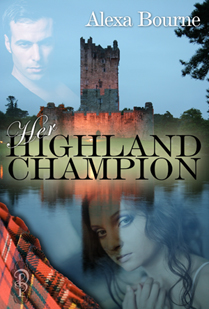