Sex with your best friend's wife for Xmas? That's idea Rocky Hubble comes up with so he and Ed Flagstone can introduce Willa and Fran to the lifestyle of Swinging. After six months of conniving and cajoling the guys succeed and that's when the fun begins. 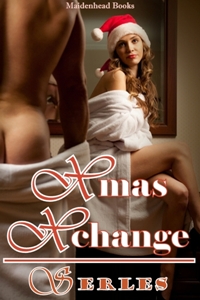 The video screen flickered deep in Ed's man cave and two sets of eyes stared at two men fucking each other's wives. They humped the women who moaned and groaned as their tits flopped.

Ed moved the mouse to another selection. "Damn, Rocky, what would you give to be one of those guys?"

"With a woman built like those, a thousand buckeroos."

"I wonder if you could get a broad like that for a thou." Ed sipped on his beer.

"It doesn't matter Ed. Neither of us have that kind of money to spend, because Fran and Willa wouldn't let us. Right?"

"Ed you're a bullshitter. You haven't screwed anyone other than Willa since you got married and you'd be scared if some good looking babe put a move on you, ya know."

"If that's true, What happened to you the last time we went to the Moose Lodge and that busty, drunk blonde rubbed her boobs over you?"

"Ah, that doesn't count because I didn't want to take advantage of a drunk."

"Tipsy and those big bare tits were a definite invitation. You had no excuse. Right?"

"I've seen those magazines where singles and couples advertise for other partners." Rocky watched Ed move from selection to selection.

"Me too but I wouldn't take a chance on strangers." Ed scratched his head. "Actually, Willa might go along with such a scheme. She's adventurous with a little bit of a gambler in her. I think I'd have a good chance of talking her into it."

Rocky shook his head. "Fran's more reserved than Willa but she's one great piece-of-ass, ya know."

"You never told me that."

"I have. Tell me about Willa?"

"She's tall, beautiful, got great tits, and one sweet pussy—wet and tight."

"You're right we have gorgeous wives and here we are lusting after something we can't have." He pointed at a picture of a busty redhead. "I want to look at that one."

Ed set his beer down. "Rocky, what would you think about Fran sleeping with someone else?"

He turned red. "I wouldn't like it at all. I wouldn't mind whamming someone else's wife, but I don't want anyone screwing mine."

Ed threw the empty beer can into the trash. "I feel the same way, but what if two close friends shared wives, like the guys on the video? Would that be different?"

After a long silence and another clip, Rocky asked, "Do you mean something like you and me swapping wives?"

"Yes, that's it. Would you sleep with Willa if I gave you permission?"

"I never thought about it, but I guess it would be an even swap, one wife for another." Rocky ran his fingers through his blond hair and cupped his chin. "What do you think of Fran?"

I've never seen Fran naked, but she looks terrific in a bathing suit with her great set of boobs.

"Would sharing our wives be adultery?" Rocky asked.

"Any time you sleep with someone who's not your wife, its adultery, but it's not cheating." He smiled at his friend.

"If you I and share our wives then we wouldn't be cheating, because the four of us would have to agree. Would, you be willing to trade Fran for Willa?" Ed asked.

Rocky shifted uneasily in his chair and pointed at the screen, "Look at that."

"Don't change the subject on me. Are you, or would you be willing to trade wives?"