Thirty-eight-year-old Raine Michaels's last boyfriend dumped her for a much younger woman, so she decides to find herself a boy toy. Scanning the local campus newspaper, three ads pique her interest, as do the men who placed the personals. She's lucky she has her stash of plastic playmates to keep her company until she chooses a flesh-and-blood man to satisfy her. But is one enough? Vince Niccolo, Rafe Leonard, and Matt Augustine are searching for Ms. Right to join their not-yet-perfect threesome. Placing individual ads might've misled the interesting woman who uses PlayingInTheRaine for her e-mail address, but would she have responded to a “three bi guys want a woman to share” request? Not likely. Now, they have to convince her they can give her more pleasure than a box of battery-powered toys. Love might be an unexpected side effect of rub-a-dub-dubbing with three men in her tub.

Heat Rating: Sextreme
Word Count: 23,644
6 Ratings (4.3)
Contemporary Menage a Trois/Quatre May-December
In Bookshelf
In Cart
In Wish List
Available formats
HTML
Mobi
PDF
ePub
Cover Art by Jinger Heaston
Reviews
I was really impressed with the depth of character in this story. For being as short as it was each of the characters had their own personality and really held that throughout. The interactions between all of them were believable and entertaining. The writing style was really well done.
Lea Barrymire
Finally 3 men who are in a relationship wanna find a woman to share it with. Absolutly AWESOME! I didnt want this one to end, I so wanna nother.
Barefoot Okie
Read more...

The Sextet Presents... Turn Another Paige (MMF)
Elizabeth Raines
In Shelf
$3.50
All Books In Cart
All Books In Bookshelf
Excerpt

SWM, 27, seeks SF, 25-35, for companionship and fun. Must be athletic, intelligent, and adventurous. Hmm. This one had potential. Raine Michaels toyed with the pen in her hand, flipping it through her fingers. She circled the ad.

SWM, 28, looking for SWF with interest in hiking, art, and Pythagorean Theorem. Age 25-35. A geometry nerd who liked museums and the outdoors. Maybe. Another red circle on the newsprint.

SWM, 25, seeks experienced SWF, 30-35, willing to broaden horizons. Raine laughed aloud, drawing the attention of three businessmen at the table next to hers. She raised her coffee cup and grinned at them. A toast to the lameness of middle-aged men. At least the guy in this personal ad was straightforward and honest. He wanted to spice up his sex life with someone a bit more practiced than he was. Who was she to judge?

Turning back to the six-page campus newspaper, she made a red ring around candidate number three. Even men in their twenties seemed to think thirty-eight was over the hill with one foot in the grave. Well, she’d make fools of them the way Gil had made a fool of her. His new twenty-three-year-old girlfriend could have the forty-year-old pig—and Raine would enjoy some hanky-panky with a boy toy or two, or maybe three.

Matty worked the buttons of her blouse while Vince unzipped her slim skirt. Rafe loosened the tie in her hair, freeing that silky curtain. A skimpy bra barely held the fullness of her shapely tits. He bent to trace the edge of the satin with his tongue, and her nipple popped out.

That’s an invitation if I’ve ever seen one. Drawing the puckered tip between his lips, he sucked and licked. Her moans encouraged him. What wonderful ways were his lovers pleasuring her?

He glanced downward to see Vince on his knees with his face buried in her fiery bush. She’s a natural redhead. Matt was focused on the back side of her. The Romeo loved ass—kissing, tonguing, fucking. He was damn good at it, too.

She moaned again. “Box…under the bed.”

Reaching behind her, Rafe flicked open her bra, easing it down her arms as he settled his mouth on hers. He brushed his thumbs over her hard nipples, and she slicked her tongue along the seam of his lips. No way could he resist kissing her deeper, tasting her. Smooth, wet, minty. And passionate. She dove inside, skimming his teeth and searching every inch of his mouth until she cried out and shuddered against him. He wanted to look to see what his lovers had done to make her come, but the expression of sheer joy on her face mesmerized him.

“So fucking sexy.” He could only agree with Matt’s hoarse comment. “I want my dick inside her for the next orgasm. Time to switch.”

Sliding his slippery finger from Raine’s ass, Matt licked her juice from Vin’s lips and chin. “Tasty. Tell me, sweetheart, do you play with the toys in the box often? You’ve got quite a collection.”

“Men don’t always satisfy me. I’ve played with them a lot this week.” Her wicked smile sent his heart into palpitations.

“If we don’t satisfy you, I’ll buy you the whole damn store.” Crawling on his hands and knees to the nightstand, he retrieved the box of condoms. “Of course, we might decide to try out a few of these contraptions to spice things up.” He stripped off his clothes and rolled the condom on his aching cock, hoping he lasted long enough to make her come again. Shit, he was going to experience pussy with the only woman he’d ever make love to. Lying on the bed, he crooked his finger at her. “Will you ride me, Raine? Then Rafe can fuck that tight rear of yours. His dick feels absolutely amazing. And I bet Vin would love to have you blow him.”

She straddled him, gliding her dripping cunt up the length of his erection. “Do you like to suck cock, Matt? I’m guessing you enjoy having one in your butt while you do.”

Joining them on the bed, Vin kissed her. “He gives great blow jobs. The other night I fantasized you were sucking me off while he went down on me. And he’s a whore when it comes to getting his ass fucked.”

Rafe appeared behind her. “His favorite position is being in the middle, with his dick in Vince and my dick in him.” His hands cradled her gorgeous tits. “Want a nibble one of these beauties, Matty?”

“Hell, yeah.” He wanted to touch all of her at the same time. Five years had passed since he last copped a feel on a woman. “Lube her some more while I sample the sweets. I doubt she’s used to having a long dong like yours in that luscious hole.” Levering up on his elbows, he swiped his tongue around the rosy-brown circle surrounding her ripe raspberry. “Yum. Vin, let her suck your balls. I’ll have the perfect view.”

Raine arched into his mouth and moaned. “That feels so good. Front and back. I might come before you’re inside me, Matt. And you, Rafe. Vince, I want to taste you. No more teasing. Please.”

Vin stood over Matt, his nuts dangling chin level with Raine. She wasted no time sucking one lightly furred ball between her lips. They all groaned. She switched to its twin as Matt dragged his teeth across her pert nipple, gently nipping at the puckered nub. Reaching a hand around her waist, he stuck out his middle finger.

“Lube me, Rafe.” Cool jelly coated his skin, and he used his free hand to spread Vin’s cheeks. Rubbing over the tight opening, he eased inside to the first knuckle then the second. “Time to suck him, Raine. I have my finger in Vin’s ass. And time to be fucked. Are you ready for three ways of loving, sweetheart?”

Instead of answering, she slipped her hand between her thighs and guided him home. The slick glide into her body was similar to being inside his lovers, but different, too. Her firm muscles squeezed and pulsed. Rafe slid in next to him, only a thin wall of tissue separating them.

“Fuck, that feels good.” Every movement brought wonderful friction, against her core, against the dick in her delectable butt. His eyes wanted to close to savor the sensations, but Matt forced them wide to watch her suck and screw Vin with her mouth. Wiggling his finger, he caressed the sweet spot in Vin’s tight hole.

Each of Raine’s moans rose an octave, her pussy quivering around him. He fought to hold back his orgasm even as his balls constricted. The pressure from Rafe grew. He was close, too.

Vin started panting the way he always did right before he exploded. “Come with us, sweetheart! Now, Raine! God, now!” 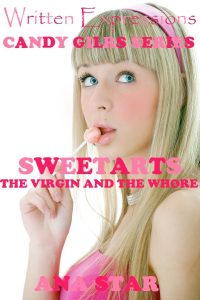 Sweetarts:The Virgin and The Whore
Ana Star
In Shelf
$1.99