A Kitty in the Lion's Den (MF)

Maverick Storm is a lion shifter, but he is also a monster. For the better part of nineteen years he was a hitman for some of the most ruthless shifters in the world. He is a cold-blooded killer without remorse. But that isn't him anymore. He is trying to live a normal life, but it seems fate has other plans, especially when his mate is the daughter of his enemy.

Kettah Milokov is a Palla's Cat shifter, and the daughter of the biggest Russian mafia boss in America. Her life is not her own, so she leaves, but can't escape when she runs into her mate, Maverick. He is a heartless killer, and the male nightmares are made of—or so she first believes. Maverick must protect her when she is found, and that means he will have to unleash his lion to keep her safe, and kill his enemy.

A Kitty in the Lion's Den (MF)

She edged toward the bed, not knowing exactly how this would end, but certainly having some very explicit images coming to mind. The sexual tension that had been brewing between them since their first encounter had reached its breaking point. He stalked forward, his eyes trained right on her, and his tail moving back and forth at an astounding rate. Both of them breathed heavily, and when he growled again, the sound spearing right to her clit, she moved swiftly. Trying to move away from him, she felt like a gazelle in the wild, and Maverick was chasing her. The blood rushed through her veins, as well as a good dose of endorphins and adrenaline. This little “dance” they were doing seemed so primitive, but God was it making her feel like she’d explode with eroticism. He tackled her from behind, but before she slammed into the floor he flipped them so he was the one taking the brunt of the force and she was now sprawled in top of him. But that act of submission was short-lived, because seconds later he moved so that she was the one underneath him now. He was so big, so muscular, that she couldn’t move, couldn’t even breathe as he pressed more of his weight into her, making her very aware that he was the one in control. His nose was so close to her face, and a few of his whiskers tickled her face, but all that accomplished was to make her wetter. She should tell him to stop, knew he would if she did, but Kettah wasn’t about to stop anything. In fact, she said the complete opposite of what was smart.

“Maverick, I need more. I need you.” She lifted her hands slowly, saw the way his whole body tensed, and speared her fingers into the thick mane around his massive head. After a few seconds of her running her hands through the thick fur a low, powerful purr left him, and suddenly he shifted back into his human form. Maverick pressed his hard, very nude body against her, and she wished she was just as naked as he was. She wanted to feel the thick, steel rod between his legs pressed intimately against the folds of her very slick pussy. His lips parted as he stared at her mouth and ground himself against her, and a deep groan left him at the same time she gasped. Even with her clothing still on, she could feel how hard he was for her as he thrust his hips back and forth between her thighs. He might be a human now, but she could tell by the canines he still sported, the golden eyes he still had, and the feel of his claws gently pressing into her arms, that his lion was still very much in control. And that was cemented when he spoke, and the animalistic rumble was present.

“I told myself I’d keep my distance, that being with you would only be a big mistake in the long run, because there was no way I could control myself when I finally had you.” He was still staring at her mouth, and the glow from his eyes was frightening in its intensity. He lowered his face even closer until his lips brushed along hers. They shared the same air, exchanged the same deep rooted need. But he didn’t apply pressure to her mouth with his, and instead moved his head to the crook of her neck, ran the tip of his nose up the length of her throat, and inhaled deeply. Kettah couldn’t keep her eyes open, especially not when he replaced the tip of his nose with his roughened tongue. “I am so much worse than you could even imagine, Kettah.” A small gasp left her when he followed the scorching trail his tongue had made with his lengthened incisors. “I’m evil, a monster, and am afraid I’ll ruin and break you.” He was trying to frighten her, that much she was certain, but for the life of her she couldn’t find that fear inside of her.

“You can’t scare me, Maverick.” He slowly lifted his head and stared down at her. “Maybe I want you to ruin me.” She looked down at his lips, at where his canines pressed against his lower lip, and knew that speaking those words would have any restraint he had leaving.

“Say my real name, just once.” He lowered his gaze down to her lips and waited for her to comply.

Kettah dragged her tongue along her lips, parted her mouth, and said, “Marick.” His name came from her slowly, softly, but the satisfied sound that left him had shivers working throughout her whole body.

“Mmm.” He closed his eyes for a second, as if reveling in the sound. “I haven’t heard that name in six years, but I have to say it sounds really fucking sweet coming from your lips. In fact,” he ground his very hard erection into her again, and a small sound of desire left her, “If I wasn’t already rock-fucking-hard, and able to drill holes in steel with my cock, hearing you say my name would have done the trick.” She arched her neck, not caring that this was fast, intense, or that she knew how this night would end: with his big body over hers and that thick, long shaft of his buried deep between her thighs. “You don’t have to tell me you want me, that you want my lion to fuck the shit out of you, because I can smell how wet your pussy is.” He went back to lapping at the side of her neck, like he was making sure his scent covered her. A low purr left her. Did she actually think she could stop this mating from happening, that she could just stay with him, accept his protection, but push away how strong the call to him was? They were mates, and ignoring what was happening between them was fruitless.

“Maverick.” He didn’t stop licking her throat and made a low hum against her damp flesh. She turned her head to the side to allow him better access.

“You’re such a good girl, Kettah. You’re my good girl.” He ground himself against her, over and over again until she knew she could come from this alone. He groaned in response, and before she knew what was happening he was moving away from her so his upper body no longer touched hers. She took that moment to really look at him. His golden flesh was hairless, and the large, thick black claw mark tattoos running diagonally along each defined pec weren’t just ink, but a badge of his profession. She knew enough about her father’s world that tattoos like that symbolized the lethalness, violence, and aggression that were housed inside of Maverick. It also proved he had taken enough lives that he earned those tattoos. A shiver worked through her at the thought that this male, the one that was moments from claiming her, was lethal in every sense of the word. He could crush her without even blinking, yet he touched her like she was a rare gem, and so very fragile.

His abdomen was flat and ribbed with hard, pronounced muscle. Her legs were spread wide, forced to stay open as wide as they could go so his lean waist could fit perfectly between them. And then there was the appendage between his legs that looked like another limb. To say he was well endowed would have been an understatement, and her pussy clenched in desire and apprehension. Surely having something that long and thick inside of her would cause more pain than pleasure? But even thinking that Kettah wanted it, wanted to feel him stretching her to the point that she felt so full there was no more room for him. But then he would give her more, so much more.

“You see what you do to me, Kettah?” She snapped her eyes up to his. He was still very much an animal, and she could sense her own cat wanting out, wanting to rub all over him and take his scent into her lungs, but also rubbing hers on him so all other females knew he was hers. 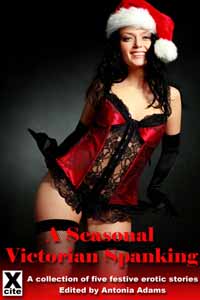