A Lamb for the Bear's Appetite (MF)

Liam Dakota, a polar bear shifter, has never needed anything but a female to warm his bed. But all of that changes when he sees his mate up on stage stripping in front of a room full of men.

Olive Brownstone, a lamb shifter that has always been there for her brother, Holden, has had to sink to lower depths to make sure he is safe. When she's demanded to degrade herself by Trent, a sadistic leopard shifter, she has to submit or watch her brother die. But Olive and her brother have found a way to escape, and she now finds herself staying with Liam, the mate she has been pushing away since they first met.

But it is clear Trent isn't going to let Olive go, and that means Liam will have to go head-to-head with the leopard until only one of them is left standing.

A Lamb for the Bear's Appetite (MF)

He twisted his hips slightly, letting her feel exactly how big he really was between his legs. God, his cock had to be as thick as her wrist, but Liam was a big guy all around, so the fact he was extremely well endowed wasn’t a surprise. The images of what it would feel like to have him sliding inside of her slammed into her brain.

“I could take you right now, Olive, and you’d let me, wouldn’t you?” He ran his tongue up the length of her neck. “Yeah, you’d let me, because you are just as far gone with this mating as I am.” The sound of his claws retracting and digging into the bark beside her head didn’t even douse the fire burning inside of her. “You have no idea what I want to do to you. I might even frighten you if I said exactly what is going through my head right now, baby.” He cupped the side of her face, and right when she realized what was happening he had his mouth on hers and his tongue passed the seam of her lips. The flavor of him exploded against her taste buds, and she found her hands speared into his hair and tugging forcefully at the strands. He grunted, and a concentrated shot of his lust slammed into her nose, making her open her mouth wider and deepening the kiss. Their combined harsh breathing, coupled with the sound of her moaning and him grunting in an almost animalistic way had Olive wanting nothing more than to tear each other’s clothes off and get fucked by her mate right against this tree.

He broke the kiss and started licking her throat, up and down, up and down, until she found herself reaching between their bodies and pressing her hand against his erection. He growled right beside her ear, a purely alpha male sound. “You could, Liam, God, you so could.”

“I could do what, baby?” He never stopped licking her, and she knew why he did it. He wanted his scent covering her, wanted anyone that was within smelling distance of her to know that she was his, and the repercussions for messing with her would be in the form of his bear emerging and tearing shit up. By the prick of his claws gently digging into the skin at her neck, she knew that he was close to shifting.

He growled low and deep, and so forcefully that she felt the vibrations in every part of her body. Just as he reached between their bodies, his fingers brushing along hers, he said, “I want this, too, but I’ not about to take my mate up against a tree.” He leaned back and looked at her in the eyes. “When I slide my cock deep inside of your body, Olive, it is going to be in a bed with you beneath me, surrendering every part of yourself to your mate.” 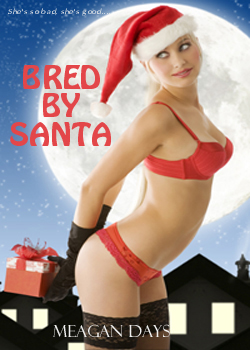