A Leap of Faith

New submissive, Faith Daniels, is completely infatuated with her amazing Dominant, Richard Halstead. So when he sends her a summons via text message a full day before they had plans to meet, she can barely contain her excitement.

But, Richard didn’t just invite her over for a play date. Not this time. He has a proposition for Faith. One that could change the rest of her life. 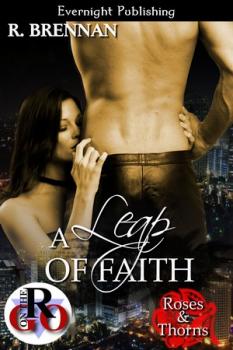 A Leap of Faith

Strong hands grabbed hold of her kneecaps, startling her. Richard jerked her legs apart until she knelt in an exposed V position. His voice arrived close to her ear, sending a chill through her. “When I ask you to kneel for me, this is how you are to do it. I want you to display your desire. Show your need with the pride of a submissive. Do you understand me, Faith?”

Her body ached for his touch. The brush of his hand, the caress of a breast. Anything. She’d even welcome the slap of his paddle if it meant he’d touch her again. “Yes, Sir.” Her voice was little more than a hoarse whisper.

“That’s my girl.” He slid a finger along her wet opening. Half a breath later, she heard his lips smack together, as if he’d just finished eating barbeque ribs. “Sweet nectar.” His hand returned to probe her slit. A finger entered her.

A gasp of pleasure tore from Faith’s throat, contorting into a whimper when he withdrew from her quivering pussy.

He traced a fingertip over her mouth, coating her lips with the evidence of her arousal.

The carnal scent of her juices surrounded her, pushing Faith toward the mindless black abyss of wanton need. Her nails dug into the flesh of her forearms as she willed herself to resist reaching for him again.

Two fingers forced their way into her mouth. “Taste your desire.”

Faith sucked them clean, her tongue swirling sensually around each offered digit.

Richard abruptly withdrew his hand and moved away.

Solitude rushed in to fill the space he left behind, leaving Faith breathless.

He signaled his return a few pounding heartbeats later with the ‘snap’ of his leash on her collar. “Come, pet,” he commanded.