Kelsey Richards kept the few men she’d allowed in her life at a distance. When her friend introduced her to Gabriel Durand, a man who liked to dominate women, she gave him a wide berth, not interested in any man she couldn’t control.

She couldn’t miss her only friend’s wedding, even if it meant she’d have to spend a week on Rapture Island, an island that catered to men like him.The reality of being there, and under Gabriel’s protection, proved more unsettling than she’d bargained for.

Kelsey was intrigued by Gabriel’s proposition, though. The idea of submitting to him in return for a week of pleasure was a lure she couldn’t resist. She didn’t want to hear his claim to want more. She didn’t believe it. She’d take the pleasure and walk away.

Sex with Gabriel, though, was nothing like she’d imagined, creating a bond she couldn’t fight.

He made her feel again.

He taught her to love. 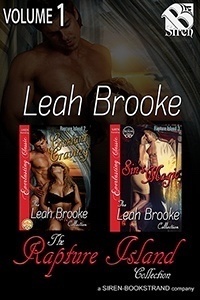 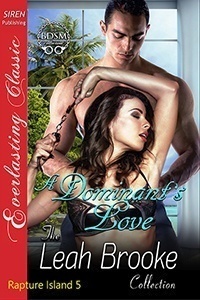 Just minutes after the morning rush began to die down in the coffee shop she owned, Kelsey Richards felt it—a sizzle of electricity in the air—and looked up, straight into the eyes of Gabriel Durand.

Her heart leapt at the jolt to her system and the surge of awareness that made every erogenous zone in her body tingle.

“Good morning, Gabriel.” Her voice sounded huskier than usual, something that she noticed happened more often in his presence.

“Good morning, Kelsey.” The low intimacy in his tone never failed to fire her imagination, and it made her curious to know if his voice would have that same deep timbre in bed.

“The usual?” Straightening cups that didn’t need to be straightened, she looked up at him through her lashes, her pulse tripping at his slow smile.

In an attempt to appear nonchalant, she shrugged as the two of them played the game they always played when he came in. “Sure, for a few minutes.”

She knew that if the shop had been busy, he would have sat at the table in the corner by the front window and waited until she could join him.

He seemed to have learned the rhythm of the shop, because he always appeared just when things started to slow down.

Nervous under his stare, she reached for a cup for a double espresso and almost knocked the entire stack over. “Why don’t you go sit down and I’ll be right there?”

The knowledge of her predicament gleamed in his eyes. With a faint smile, he inclined his head. “Of course.”

Watching him walk away, Kelsey admired the fine figure he made in his dark suit. She’d never seen him in anything else, and she couldn’t stop trying to imagine him in nothing at all.

“I don’t know how you can contain yourself. You try so hard to look calm and collected when he’s looking, but the second his back’s turned, you eat him alive with your eyes. Don’t you just want to take a bite out of him?”

Kelsey wanted to laugh out loud at Gina, the young woman she’d hired to manage her coffee shop, but managed to keep a straight face as she fixed coffee for Gabriel and herself. “The thought’s crossed my mind a time or two.”

Gina sighed. “I’m going to miss him when you sell this place to me. He’s better than a jolt of that espresso he loves.”

Kelsey glanced toward Gabriel, unsurprised to find him watching her. “I haven’t agreed to sell yet, and what makes you think he won’t come in here after I sell it to you?”

Gina snorted. “Please. He comes in here to ogle you and try to get in your pants. How you’ve resisted this long is beyond me. He started coming in, what, six months ago?” Smiling, she picked up a towel and wiped the already clean counter. “On the other hand, I might get back some of the customers he’s scared away—you know, the ones who stare at you and he glares at them until they leave?”

Kelsey’s face burned. “Shut up. Why I don’t fire you, I’ll never know.”

Gina giggled. “Because you love me. Now, stop dawdling and get out there. God, that man’s a walking orgasm.”

Avoiding Gabriel’s stare, Kelsey picked both cups up from the counter and made her way to the table where he sat, smiling at Len, who worked at cleaning up after the morning rush.

Setting Gabriel’s cup in front of him, she lowered herself to the seat across from him, wrapping both hands around her cup to hide the fact that they trembled.

She knew what he’d come today to talk about, and it excited her as much as it unnerved her. “So how are you today?”

Looking sexy, expensive and dangerous, Gabriel smiled and slid his gaze over her features. “I’m fine, thank you. And you?”

Kelsey tightened her fingers on the cup to relieve the itch to run them through his long, dark hair. “I’m fine.”

Gabriel laughed, a deep, rich sound that vibrated through her, stroking her skin as effectively as a caress. “You’re not fine. You’re nervous as hell about going to the island with me. I thought we’d gotten past that.” Sitting forward, he unwrapped one of her hands from around her cup and held it in his, running his thumb over her fingers. “I thought we were friends.”

Kelsey jolted at the electric current that raced up her arm. Her face burned as she tried, unsuccessfully, to pull her hand from his. “Okay, friend. Why don’t you tell me exactly what to expect.”

Gabriel studied her fingers. “Why haven’t you asked Julianna?”

Shaking her head, Kelsey grimaced. “I have. Several times. She just laughs.”

Still a little disconcerted that her best friend would be marrying two men in less than a week, Kelsey was even more shaken at the prospect of going to the island Julianna’s fiancés owned—an island that catered to Dominants and submissives.

Gabriel grinned, lifting her hand to kiss her fingers before releasing it, sending another wave of heat up her arm.

“The rules are that every woman that goes to the island has to be accompanied by a man who agrees to take responsibility for her. He has to make sure she follows the rules of the island and even arranges for the clothing she must wear while she’s there. Of course, we have to share a room.”

Releasing her, he drew a strip of black fabric from his pocket. “I get to play with you. Explore you. Enjoy you—as my possession.”

Not about to let him see how much he intimidated her, she smiled up at him, arching her back to thrust her breasts out to him. “Do your worst, Master.”

She drew in a shaky breath when he moved to stand behind her, chills breaking out all over her skin when he slipped the dark, silky fabric over her eyes. No longer able to see, she shivered as he tied the blindfold, her senses sharpening.

Arching again at the slide of his fingertips over her back, she couldn’t hold back a moan. “Oh, that feels—”

Shocked at the effect his authoritative tone had on her, she snapped her mouth closed, biting back another moan—this one of frustration—when he removed his hands. Wondering where he would touch her next, she trembled with anticipation, turning her head to listen for any sound that would give her a clue.

She felt him move away, and then heard the sounds of him delving into his bag again. Keeping her head turned toward him, feeling his gaze on her, she trembled helplessly. The mental image of what she must look like to him in her present position had her tugging at the ropes as the awareness in her breasts and slit grew.

Jolting at the suddenness of his warm breath against her ear, she leaned back into him in an effort to get as close as possible.

The feel of his finger, coated with cold lube, thrusting into her vulnerable bottom startled a cry from her, the reality of being impaled in her most private opening heightening her sense of defenselessness. “Oh, God. Oh, God. Ahh!” Chills wracked her body as he slid his finger deep, cries pouring from her as he moved it around firmly as if he owned her ass and she had no say in what he did to it.

She struggled against her bonds, her inability to evade even the slightest touch more alarming than she would have imagined. No matter how much she tried to move, she could lift up slightly, but she couldn’t close against him. Biting her lip to hold back more cries, she stiffened as he stretched her, pressing against her inner walls with a ruthlessness that had her clenching on him as he awakened nerve endings she hadn’t known existed.

With the same suddenness, he slid his finger free, leaving her clenching at emptiness, the sense of loss unbearable.

Before she could catch her breath, something slim and slippery was pushed into her, the sense of relief and desperation for more forcing her to push back against him.

Struggling to adapt to having her ass filled, she concentrated on Gabriel’s movements, his breathing, and forced herself to be as still as possible. She couldn’t identify the sound she heard at first, but as the item Gabriel had inserted into her got bigger, she realized that it was the sound of it being inflated.

“You wondered what would happen if I did something to you that you didn’t like—something that turned you off. At the time, I assumed you were talking about your ass and the prospect of pain, and assured you that I wouldn’t do it again if you didn’t like it. If you come while this is filling your ass, then this gorgeous ass is fair game in the future.”

Kelsey’s breathing grew harsher with every pump, as each filled her ass with the plug even more. She felt so full, so invaded, that she couldn’t catch her breath, the chills that raced through her now stronger than ever.

He stretched her with every relentless pump, making her ass burn, but still she wanted more.

Wiggling against the fullness, she bit her lip to keep from begging him for more, begging him to move it inside her. She tugged harder on the ropes, the inability to escape her bonds adding a layer of excitement and freedom she hadn’t expected.

The pumping stopped, and Gabriel’s hand slid over the cheeks of her ass, his fingers flexing as if testing the resilience. “You don’t have any choice, remember? This is a fine ass you have here. Soft. Firm. Round. I’ve had more than a few fantasies about this ass. Since I won’t punish you unless—until—you disobey me, I won’t turn you over my knee and give you the spanking I’ve dreamed about. Yet.”