For Jordan Dumas, being an Alpha with no responsibility has been a pretty sweet gig. He does as he pleases, and sleeps with whomever he wants to. So when the mating bond is triggered, his world is flipped on its head. His mate is submissive and closeted—two things he's not interested in.

Erik Allaire has spent his entire life being trained for a position he doesn't want. When he suddenly has the opportunity to follow his own desires, he doesn't know what to do. Especially when those desires come in the form of Jordan Dumas. He's never felt such passion, but can't imagine expressing these fragile new feelings with someone whose reputation as a player precedes him wherever he goes.

Whether or not they want each other, they inevitably need each other. As their bond slowly grows, danger closes in on all sides. And when their worlds finally collide, only trust can save them.

Jordan pushed the door shut behind him and swept Erik into his arms, capturing him into a heated kiss.
“God, I’ve missed you, little wolf,” Jordan panted.
“We can’t do this here,” Erik replied, just as breathless.
“What are we doing? I wanted to talk to you. Isn’t that allowed?”
Jordan swallowed Erik’s reply with another kiss.
“This isn’t talking,” Erik said between kisses as Jordan backed them against a wall.
“I don’t hear you complaining.” Jordan palmed Erik’s crotch, rubbing his hand over the hard bulge of Erik’s cock. A soft sigh escaped Erik. “You drive me crazy, you know that? I can’t get you out of my head. I needed to get you alone before I lost my mind.” Jordan nuzzled Erik’s neck, basking in his scent.
Erik turned his head, nipping Jordan’s ear and drawing a warning growl from him. Jordan felt Erik’s smile against his cheek.
“Oh, you’re in trouble now, little wolf.”
Jordan dropped to his knees, popping the button of Erik’s jeans as he went.
“What are you doing?”
“What does it look like?” He dragged the zipper down and freed Erik’s cock, smiling when a soft moan came from Erik at the first lick of his tongue against the engorged member. Jordan pulled Erik deep, flattening his tongue and relaxing his jaw. He knew he could deliver an amazing blowjob in record time. Jordan enjoyed performing oral sex no matter the gender of his partner. Giving someone such intense pleasure without taking any for yourself was, at its core, a power trip that fed his need for control.
Erik bucked his hips, his breath coming in stuttered gasps and pants. Jordan felt Erik’s body tense a moment before the orgasm hit. With a loud cry, Erik erupted, his salty essence filling Jordan’s mouth. He greedily sucked it all down, not releasing his hold on Erik’s cock until the spasms stopped and he’d swallowed every last drop of his mate.
Once Jordan’s hands no longer held him in place, Erik slid down the wall on shaky legs.
“Holy shit,” he gasped, eyes closed.
Pride—his stupid, Alpha male pride—puffed out Jordan’s chest.
“Told you you were in trouble,” he smirked. “Now that we both feel better, let’s get out there and take our places with Cassie and Kieran.” Jordan stood and held his hands out to Erik, who let himself be pulled up. “And later we can finish what we started. I need you in my arms again, little wolf. The merger is official, there’s no reason to keep this secret any longer. Tonight is for Cassie and Kieran. We can make our announcement tomorrow.”
Erik’s hand fell from his when Jordan turned for the door. Confused, he looked back to see that Erik hadn’t moved from his spot against the wall.
“Erik?”
“I don’t know if we should continue this. If we should do what you said.”
“What the fuck, Erik? Do you want this or not? Make up your goddamned mind! I can’t take this shit. You say yes, your body says yes, your fucking wolf says yes, and then you turn around and say no again.”
“What if the other packs don’t accept us?” he whispered, and Jordan could see the fear in Erik’s eyes.
“Then they fucking don’t!” He knew his voice was rising, but so was his frustration. “It’s just like with Cassie. The other packs didn’t like the idea of a female Alpha until she proved them wrong. So we prove them wrong!” Jordan stepped up to Erik and firmly grasped his head. “And we do it together. Our Alphas are on our side. The rest of them can go fuck themselves. Hell, if half of those old bastards knew what their sons were doing behind closed doors … don’t worry about it.”
“I don’t know if I can do that,” Erik replied. “I don’t know if I’m strong enough.”
Jordan clenched his jaw and turned away from Erik in an attempt to control his rage.
“You better figure it out real goddamned fast, little wolf.” He threw an angry glare at Erik, who stared at his feet. “Because if the answer is that you can’t, then one of us is stepping down and moving away. I’ve tried to be patient with you, but I’m about done with it. It’s a simple fucking answer. Yes or no. Pick one and stick with it.”
Jordan stormed from the room, afraid that he was leaving his heart behind forever.

The Sister of Seven Ravens (MM)
Sophie Martin
In Shelf
$5.50 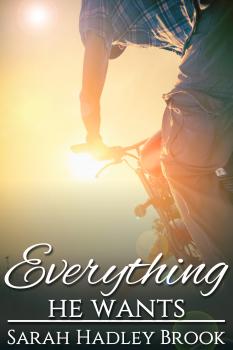 Everything He Wants (MM)
Sarah Hadley Brook
In Shelf
$3.99
Tweets by
sirenbookstrand