Overweight and unattractive, Amber thought she’d finally found love only to have her heart broken by hunky Tony Jeffers. When he humiliates her, she decides to devote her life to helping others, and forsake ever finding a man. A tragic plane crash proves to be her salvation. After a stint with a jungle tribe, and with the help of the wise woman of that tribe, Amber finds the means to avenge herself, and keep Mr. Hunk from hurting anyone else. To top it all off, when the bad boy realizes who it is and what she’s doing, it’s a huge turn on for him. Can the two find love after all? 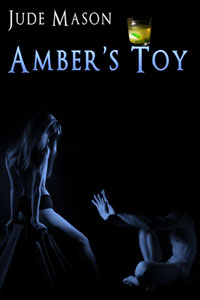 She sat on the edge of the bed and watched him strip the last of his clothing off. He really was a magnificent specimen of manhood: wide chest, a six-pack of rippling muscles, tight muscular thighs, and a beautifully thick cock that she remembered fondly as having a slight curve to the right.

“Now aren’t you a pretty sight,” she whispered. Still partially dressed, she spread her stocking-covered legs just wide enough to ensure he got a glimpse of the pale flesh above the dark band. His eyes flickered down, then back up to her breasts. He seemed confused, and she loved it. “Got an itch, baby?” she teased, holding out a hand.

He took a step forwards, which brought his erection right to the palm of her hand. Deftly, she folded her fingers around the warm, hard flesh and felt him pulse. Easing her fist towards his belly, she watched a tiny droplet of clear liquid form at the tip.

“Yeah, an itch that needs scratchin’,” he growled.

“Whatdya mean? I don’t know the half of what?” Tony’s voice was hard, but his body continued to thrust into her hand.

“Why don’t we play a game?” she suggested, releasing him. She scooted to the head of the bed and reached into the drawer in the side-table. Searching, she found the fur-lined cuffs and pulled them out. Holding them towards him, she knew they looked innocent with the soft rabbit fur lining.

The smile he gave her sent a shiver up her spine. “You want me to cuff you?” he asked, incredulously. His cock twitched.

She chuckled and replied, “No, I don’t trust you that much, yet.” She scooted to the edge of the bed and again reached for his erection. The smooth skin slid across her forearm and when she took hold of him again, he groaned. “How about I cuff you, this time? Why don’t you climb onto the bed and put your hands up so I can cuff you to the headboard?” She dangled the cuffs where he could see them and waited for him to agree. She knew he had to. He might want to tie her up, but he had to know she couldn’t let that happen, yet. He’d feel obliged to give in, even if he wasn’t thrilled with the idea of being helpless.

“Sure, why not?” he said, after eying the cuffs and her for a few moments. “Just this time though.” He slid past her and onto the bed.

Crawling forwards, she got a closer look at his ass. Tight and well-muscled, it had a deep cleft and a tiny patch of hair at the base of his spine.

He flopped over and lay sprawled on his back. Reaching up, he held his hands for her to cuff. “Be gentle,” he said, then winked.

Her heart gave an extra quick beat. She had him. Running the tip of her index finger down his arm, she smiled at his helplessness. Tweaking a nipple, she smiled when he grunted and tried to pull away. How warm his flesh was under her hand. How he squirmed when she teased his nipple or ran her fingers down his side.

“You like that?” she asked and slid her hand over his stomach towards his throbbing erection. She ignored it, continuing down to caress along his inner thigh.

“Oh, yeah, baby.” He thrust his hips up, sending his cock into a wildly jerking dance on his lower stomach. “You know you want it, come on and take it.”

Amber sat close, facing him. She continued to trace circles on his thigh, moving ever closer to his groin. His testicles shifted, the sac tightened, skin crinkled. She allowed a few tendrils of pubic hair to brush her knuckles as her hand moved between his thighs.

He shuddered in response and strained against the cuffs.

“You want me to hold them?” She slid her fingernail over the wrinkled flesh. His groan was music to her ears as was the tightening of his buttocks.

“Damn, my ass—” He bit off whatever else he was about to say.