Half witch and half wolf, Ganda is like no other being on earth, but more than 3,000 years ago the love of her life, Colin, was killed and since then she's remained an old black woman in the swamps of Louisiana. That was, until Joshua and Jessie Kaine showed up and brought her back to life.

Now on a mission to put her past to rest, Ganda visits Ireland, the land of her birth, and then the land of Colin's death—Egypt. What she finds there isn't the answer she's looking for, but a mystery that will change her entire future. 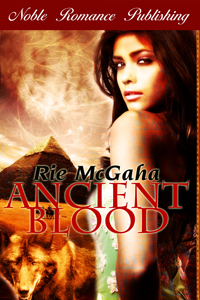 Ireland was Ganda's destination, where she would visit her beloved Colin's final resting place—the last place she'd been before making the choice to remain in human form. Now that she'd decided to live again, she would begin here, as well.

She traveled by ship. She wasn't up to giving flying a try. Not just yet.

As the Irish coast came into view, her hands shook. She took a deep breath as she took in the stunning sight. The rocky shores, the lush, green valleys shrouded in mist . . . . Shimmers of rainbows formed by etches of sunlight gave the land an otherworldly, magical quality.

Thousands of years ago, the land hadn’t been called Ireland and hadn’t been populated. She and Colin had loved the place for that very reason. The island had been their paradise where they were alone and in love. As Ganda disembarked from the ship and stepped onto the dock, a pang of loss filled her. Though the island had changed, there was a familiarity to this place that felt welcoming.

Thoughts of Jessie filled Ganda’s mind. What would she have done without her dear friends who had helped with the travel arrangements? The ticket for the ship, the hotel, all the reservations made from Jessie's laptop computer, everything had been set up for Ganda before she left the States. She checked into her hotel, staying only long enough to shower and change. When she’d finished dressing, she returned to the lobby, where the doorman hailed a cab for her. She handed the driver the address and settled into the seat, gazing out at the passing landscape as they sped toward the country.

The cabbie pulled into the cemetery drive and stopped. Ganda asked him to wait. Hesitantly, she emerged from the cab and walked across the grass, a gentle breeze caressing her face. Her hands shook violently; she slowed her pace. Inhaling deeply, she held her breath for a moment, then exhaled slowly as she stood before the gravestone and read the inscription. Her husband's name, Colin . . . next, the eulogy, Beloved husband of Ganda . . . the date of his death but not his birth was carved into the stone. So old, she thought, and weathered by centuries of rain and wind. Kneeling, she placed her hand on the stone, tears rolling down her face.

"Oh, Colin, I've missed you so very much. So many years have passed, but I feel as if you left me only yesterday. I tried to join you, my love, but . . . ." She sighed. "I guess I didn't have the strength. I hope you know how much I love you. Then and now."

Her thoughts drifted back in time. Colin's days had been filled with hard labor since his youth. He was beautiful, with his thick black hair that seemed always to hang a little too long. His blue eyes were as brilliant as the sky in midsummer, with heavy, dark brows and thick, black lashes, and his cheeks revealed deep dimples whenever he smiled, which was often. An easy-going man with easy manners and a likeable personality, he held a quick wit and a way of looking at a person as if he could see their very soul. Colin was well read in spite of working the fields from sun up until sun down. Every evening after supper, he spent time by the fire reading books of all kinds, especially those that told of faraway places and the ones with drawings of maps and oceans.

Not until she met him, and they married and he became the wolf, had he actually been able to visit some of the places he'd read about, to stick his feet in the water of those far away oceans. He'd done a lot of things once they'd married that he'd never dreamed of actually doing before.

She came into his life one day out of the blue and he fell madly in love with her. In no time at all, he asked her to be his wife. He'd expressed his amazement that she had fallen as deeply in love with him as he was with her.
She'd set their wedding date for the full moon of the summer solstice and told him he had to know one very important aspect about her before they took their vows. She hadn't enlightened him with details, telling him it would be better if he saw it for himself, knowing if she'd told him of it first, he never would have believed her.

As they had stood together under the night sky, the moon yet to rise, she'd asked him to help with the buttons on her dress. She remembered how his hands shook as he began to unbutton her gown. The dress slid from her shoulders, pooled at her feet, and she smiled at his shocked expression.

Completely naked before him, she stood with her hair fell around her bare shoulders, smiling slightly as she observed him. As the moon began to rise, full and low to the earth, Ganda took several steps away. He watched in fascination as she began to transform.

Her limbs lengthened into a matrix of muscles that bulged beneath her skin; dark fur, shiny and black, began to cover her body. Her jaw jutted forward, fangs replaced teeth, and her snout grew. The air around her charged with electricity as if a thunderstorm had all at once gathered. Colin gasped, took a few steps backward and fell to the ground.

He watched as she grew a tail and swished it in the air. And then, as quickly as she threw back her head with a howl, she became herself again. Stepping into her gown, she covered herself, and went to him. Taking his hand, she sat beside him and explained everything about her family's curse.

She had explained she wasn't compelled to change with the moon as others usually were. Because she was as much witch as wolf, she had greater power and control than others of her kind. In fact, truly no other existed like her at all. Her mother had been a witch, her father, a black wolf, and though the spell cast by her mother made him human, the curse turned him into the wolf again each month upon the full moon.

She had told him the entire story and gave him the choice to either stay with her or to leave. She said it would be up to him. In spite of how much she loved him, she knew this was a lot for a man to take in, and that was why she wouldn't marry him until he was aware of the truth. It had to be his choice to accept her as she was, to know the secrets she carried, to know her family.

He had looked into her eyes, brushed the hair from her forehead, and told her that, without a doubt, whatever else she was, she was also the only woman he'd ever loved. They were married under the full moon that very night.

As they stood together, bathed in moonlight, holding one another, their lips but a breath apart, he told her he wanted to be with her forever, that his love for her was so deep and so strong, the thought of not being her husband forever was too much to bear. She didn’t hesitate. She kissed him quickly, made the change to wolf and held him firmly as she bit him. At nearly midnight, her magic was at its strongest. The man fell to the ground, writhing, crying out in pain as his mortal body changed and the wolf emerged.

Ganda had kept nothing from her new husband and had told him of Amcor, a wolf who had pursued her. She told him of how she'd refused the aggressive overtures Amcor had made time and again, but Colin didn’t know the extent of Amcor’s desire to have what he wanted.

For Amcor, it wasn’t a matter of love, but of getting what he wanted no matter the cost. He wanted Ganda and her refusal angered him. In vain, he had even gone to her father, hoping to make an ally in order to convince Ganda to marry him. When Ganda fell in love with Colin, Amcor’s desire raged into insane jealousy. He swore he would have her at any cost, and he would have Colin’s life as well.

Colin had taken the advice of his father-in-law and took Ganda to a faraway land. They had traveled over oceans to foreign lands that neither had ever seen before. Days became weeks, and then weeks turned into years, as they traveled together. Eventually, they had gone to Egypt. What they found was heartbreaking. The country was at war with itself, its people killed their own as they ravaged the land. Still, they had found something beautiful in the land they both loved and wanted to help the people regain the beauty and wealth they once had.

Egypt, Ganda thought now. She would go back there, but not just yet. She rose, kissed her fingertips, pressed them to the stone. "Till we meet again, my love." She turned away and returned to the waiting cab.