Stacy thought her life was over when she found out her husband was having an affair. She wanted to curl up and die. But what she got was a small white business card that could forever change her life...if thats what she wanted.

A new world with new possibilities opens for her. Her new boss is complicated, and her first client, Demetri is more than she could ever have bargained for, or ever thought possible in one man.Since the former is a vampire and the latter is a werewolf, her new job is interesting, to say the least. The biggest challenge she faces, however, is her own feelings, especially about her husband.

But one thing is certain, revenge is definitely on the menu. And it's a dish Best Served Cold. 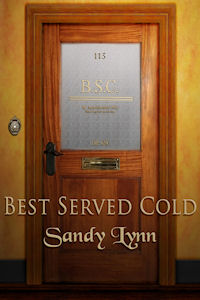 Taking her hand, he led her into the building. Part of her wondered how often he was here if he was able to simply walk past the security desk.
“Where were we?” he asked as they waited for the elevator. She wasn’t sure if she was still in the mood. She wasn’t sure how she felt about him being able to simply walk into her building. Could she be overreacting? Did he live here too? If so, why didn’t he just take her to his place? Was he married?
She heard him take a deep breath, then sigh. “I’m not going to like this, am I?” He rested his forehead against her.
“I just want to know why the security guard didn’t want to know who you are.”
“Does it matter?”
She opened her mouth to say that it did matter. She didn’t want to ruin someone else’s marriage as hers had been trampled on. But he didn’t give her the chance to talk. His mouth covered hers, his hands pulling her closer as his tongue thrust into her mouth.
Stacy moaned into his mouth, her arms circling him as she held on tight. Her fingers threaded through his hair, tugging on the locks and making him growl into her. The sound turned her on more than she’d ever thought possible.
He nipped her lips before pulling back slightly. “I just had to know what that felt like one more time.”
Stacy thought about his previous question. Did it really matter why he was able to walk past the guard? Only one answer really did matter. “Are you involved with anyone? Girlfriend? Wife? Is there anyone, man, woman, or other being who considers you theirs?”
“No. Or at least, no one who has the right to make that claim.”
“Then let’s go.” She walked backwards onto the newly arrived elevator. Crooking her finger, she motioned to him. Wearing a smile that she could only call wolfish, he followed her, backing Stacy into a corner.
He growled again and lowered his head to her neck. His hands went to the front of her shirt and deftly unbuttoned it. Spreading the material, his nails scraped against her.
“Someone will see us,” Stacy blushed. She tried to pull the sides of her shirt back together.
“So?” He nibbled on her shoulder, his thumbs tracing her taut nipples, then plucking at them.
The elevator stopped, and when she looked up, she was grateful it was her floor.
“Come back here,” he said, grabbing her shirt when she tried to walk away. Unable to see anyone in the hallway, she untangled herself from the material still hanging on her and sprinted down the hall with a laugh.
A very arousing growl sounded behind her, and she was certain that he’d be chasing her. She hoped she hadn’t done anything wrong, but figured she’d already started this course of action and so she would follow where it led. Opening her door, she tried to push it closed when Demetri stopped her. He had a predatory smile on his face as he stepped through the door.
“There’s a reason all those fairy tales warn little girls about the big, bad wolf.” He easily pushed the door shut.
“Should I be afraid? Because I’m not.”
He closed his eyes for a second. “I know. Just like I know exactly what you are feeling right this second.”
She looked at the bulge in his pants and quickly sucked in her breath. “Oh my.”
“Didn’t your mother ever tell you? You should never run from a wild animal.” He stalked her in her apartment. But she still wasn’t afraid. If anything, it seemed to make her more excited. And his smile let her know that he knew that as well. 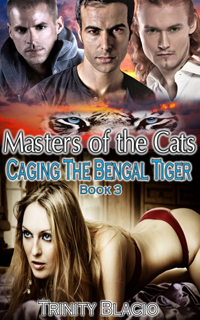