A Boyfriend for the Holidays (MM)

Lucian Rose is the owner of Rose Group, Incorporated. He's still single, but in a desperate attempt to stop his parents from their incessant matchmaking efforts, he lies and tells them he's currently dating a wonderful man. He panics when his parents insist that he should bring his boyfriend home for Thanksgiving, which is approximately two weeks away.

Then he bumps into Coby Elliott, a senior at the local university. They're both obviously attracted to each other, and Lucian is relieved when Coby agrees to help him out. When he discovers that Coby is one of his employees, he knows he has to tell the younger man about it. However, he's worried about Coby's reaction because he's quickly developing strong feelings for the younger man.

Will Lucian's confession break them apart? Or will he finally get a boyfriend for the holidays and beyond?

A Boyfriend for the Holidays (MM)

It wasn’t until the two of them were almost halfway through the meal when Lucian abruptly thought of what he perceived to be an excellent solution that would take care of his current predicament, which involved a little white lie to his parents about his so-called relationship, and Coby’s situation.

“Your face looks funny,” Coby said. “What are you thinking of?”

Lucian hesitated for a second or two before he put his utensils downs and leaned in over the table so he could be closer to Coby. “What do you think about a nice Thanksgiving dinner in Miami? At least, I think it will be there this year.”

Coby seemed surprised by Lucian’s invitation. “Well, it will be much warmer there than in Minneapolis. Are you, by chance, asking me to accompany you to Thanksgiving dinner with your parents?”

“But you barely know me.”

“True,” Lucian agreed while warming himself up to get ready for what might turn out to be a long conversation between him and Coby. “But I think this can be a win-win situation for both of us.”

The curiosity was evident all over Coby’s facial expression now. “Explain it to me.”

Lucian was more than a little embarrassed that he would have to do that, but he did it anyway. He informed Coby about his parents’ meddlesome behaviors in his romantic affairs and how much they were driving him insane, but he also conceded that his parents’ intentions stemmed from their deepest desires to make sure that he wouldn’t have to be alone for the rest of his life. Coby raised both of his eyebrows while staring at Lucian.

“Let me guess. You want me there as a buffer.”

“Uh, sort of. I’m thinking more along the line of a fake boyfriend.”

Coby snickered. “That frankly sounds like a terrible idea, man.”

“I guess, but I’m desperate. I want them to get off my back for a moment and allow me to lead my life in peace.”

Coby was quiet for the next several seconds, and Lucian had a feeling that the other man was about to reject his idea. He couldn’t blame Coby, though. Bringing a fake boyfriend home could have many negative consequences, the least of which would be mortification on his part if his and Coby’s lies were somehow exposed later on.

“I like you,” Coby abruptly pointed out while grinning at Lucian. “The first two things I immediately noticed about you earlier was how damn good-looking you are and how fit your body is.”

A part of Lucian had always been aware that he was an attractive guy, but it was still quite an ego booster to hear the compliments coming from a man as gorgeous as Coby. “Thanks.”

“You’re welcome. I certainly won’t mind attending Thanksgiving dinner with your parents as your pretend boyfriend. Or whatever you want to label it.”

“Okay…” Lucian trailed off because he wasn’t sure where Coby was going with the conversation. “What’s your point?”

“Well, all I know about you so far is, aside from your physical aspects—”

“Not the size of my endowment.” Lucian cut Coby off midsentence while waggling his eyebrows at the other man.

“Whatever. May I continue?” Coby asked, and Lucian made a zipping motion with his lips and fingers. Coby snorted in response. “Anyway, before I was so rudely interrupted, I was about to tell you that I know nothing about you. For starters, I don’t know what you do for a living that enables you to afford this enormous estate.”

Lucian hesitated. He knew he should be open and honest with Coby, but he didn’t want to frighten the other man away before the two of them could get a chance to develop a friendship between them. Most people fell into two categories when they knew how wealthy he was. They would either fall over themselves trying to please him or take advantage of him. Lucian liked Coby, and if he weren’t entangled in such a desperate situation after what he had perceived to be a little white lie to his parents about that nonexistent boyfriend, he would have liked to properly date the other man. However, at the moment, he didn’t have the luxury to slowly chase after and impress Coby the way he wished he could.

“Oh, I dabble in a few profitable things here and there.”

“Hotels and the food industry,” Lucian continued to hedge while maintaining what he hoped to be a neutral expression on his face.

“Oh, I see,” Coby said. “So, you have invested money in those two industries then.”

“Something like that. I’ve also put my money into pharmaceuticals, IT, and a few others. Diversification is necessary.”

“Cool. You must have hired the right people to manage your money for you.”

“So, Coby, about that Thanksgiving dinner—”

Lucian wasn’t sure if he was more relieved or astonished that he didn’t have to work harder to convince Coby, but he was grateful nonetheless. “Really?”

The moment the two of them entered the bedroom Lucian quickly shut the door before he stripped all of his clothes off. Then he got up onto the bed, where Coby was already naked and waiting for him. He chuckled softly as he hovered over Coby’s bare body, stabilizing himself with the palms of his hands.

Lucian snickered while studying Coby from the top of the younger man’s head all the way down to the groin. Coby’s erection throbbed over and over again as the precum leaked out profusely. Lucian grabbed at Coby’s dick and stroked it gently while staring at the younger man’s face. Coby was smirking, and he had this naughty and flirty expression on his face, but he was visibly trembling underneath Lucian.

“Cold? I can crank up the heater—”

Lucian gazed into Coby’s eyes. “Are you scared?”

Then Lucian gaped when he abruptly thought of something. “Hold up. Are you a virgin?”

“Oh, right. Why do you look so terrified then? And you seem as if you’re about to jump off the bed and escape from me sometime soon.”

“It has been a while since the last time I had sex with anyone.”

“Okay. Why are you eyeing me like that, though?”

Coby ran his hands all over Lucian’s chest, arms, and stomach. “I’m amazed by your muscles. Damn!”

Lucian preened a little. “Thanks. Do you like them?”

“Good because I like your body, too,” Lucian muttered while caressing all of the lean muscles on Coby’s upper body and arms. “And you have a really nice cock. Quite a handful.”

“Not as long and thick as yours, though.”

Lucian chuckled. “Too much for you to handle?”

“Not sure, but I definitely want it.”

Lucian breathed out a sigh of relief and anticipation as he tenderly merged his lips with Coby’s. He rumbled in his throat when Coby immediately deepened the kiss. He could feel the slight roughness of Coby’s lips and every slide of the younger man’s tongue against his own as the passion mounted higher between them with every passing second. He was taken aback when Coby suddenly wrapped both arms around his back and pulled him downward. He lost his balance, and before he knew it, he had toppled over. He was now fully pressed down on top of Coby from head to toe. He attempted to get up in the next instant, but he was unable to move because Coby was clinging onto him with his arms and legs. He broke the kiss in a hurry.

“Coby, baby, let me up. I’m more than twenty pounds heavier than you. It must be really uncomfortable for you to have me lying on top of you like this.”

Coby shook his head. “On the contrary, your weight resting on top of me feels incredible. Your skin feels warm everywhere, and damn! You smell so fucking good.”

Lucian was stunned for a second or two. Then he snickered softly.

“Musky, and I’m more than a little bit sweaty, baby.”

Lucian could feel his dick pulsing before it strained much harder as the arousal coursed through his entire being. “Yeah? Is that what you want, baby?”

“Are you sure you can take me, baby? All ten fucking inches inside your ass?”

“Anything for you, baby.”

Coby cupped both of Lucian’s cheeks with his palms. “I got myself tested at the clinic recently in anticipation of this very moment.”

Coby smirked. “Yes, and the results are good. What about you?”

“My last test was a few days before we met, and everything was all right. I haven’t been with anyone sexually since.”

“Great. Now, will you please make love to me?” 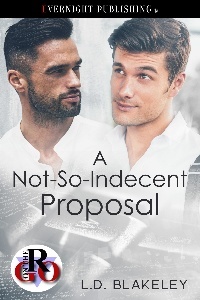