England, 1820. Bachelor Jonathan Cavendish has become reclusive in the years following a failed romance with the love of his life. In the years following their split, he has thrown all his energy into restoring the small estate he inherited from a great uncle and has put aside any thoughts of romance.

Although he’d rather remain at home alone for the festive season, this year he’s accompanying his cousin Freddy to a Christmas country house party. Freddie seems to be constantly falling in love and, on this occasion, he is infatuated with a young lady called Belinda. Jonathan is asked by Freddy’s anxious mother to accompany him to the house party to keep an eye on the situation, in case the young lady turns out to be an unsuitable choice.

Despite this inauspicious beginning, Jonathan catches the eye of Nick, the handsome son of a local well-to-do farmer, who is a constant presence at the holiday entertainments. Nick is intrigued by Jonathan’s kindness and also by the sadness he hides from public view.

The initial attraction between the men seems to be mutual, but can Nick break through Jonathan’s defences and teach him to love again? 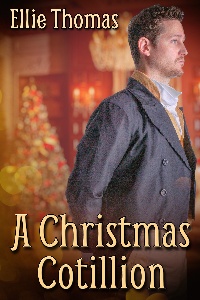 Mr Hammond’s chance came when Jonathan was on the dance floor, already partnered for the next dance. Belinda, for once, was unaccompanied but still standing up, as though eager to join in. Mr Hammond was near her, but unfortunately looking in the other direction.

Jonathan glanced over in helpless frustration, not wanting to abandon his young dance partner in the middle of the floor just as the music was about to start. As he again looked from one to the other, he caught the eye of the handsome farmer’s son. He was serving refreshments amongst those who had taken part in the last set of dances. He followed his direction of Jonathan’s scrutiny clearly with a sharply raised eyebrow.

As if receiving intelligence, he nodded at Jonathan decisively, put down his tray on a side table and eased the few yards through the gaggle of couples approaching the dance floor and tapped Mr Hammond on the shoulder.

Luckily, just then the music started and Jonathan saw his expressive face indicating a social dilemma. He nodded towards Belinda and then pointed to the momentarily abandoned tray as if explaining why he could not partner the young lady for himself. When all had been made clear to Mr Hammond, he received a grateful smile from the young man, as though Mr Hammond was doing the favour. He then turned back to collect the tray and offered the contents to the thirsty crowd.

It was neatly done, with Mr Hammond now obliged by his very good manners to ask the young lady to dance. Mr Hammond braced himself and made his way to Belinda, face flushed with embarrassment as though expecting a rebuff. Instead, he received her hand and a warm smile. Jonathan didn’t realize he was holding his breath until the couple reached the floor, unimpeded.

After a hectic country dance, Jonathan and his puffing partner retired from the fray. He was satisfied to see Mr Hammond and Belinda remain on the floor for the next set of dances, now conversing with apparent ease. As he looked at this with a feeling of pleasure, a glass of sparkling wine was placed in his hand with a murmured, “That was a good notion.”

He looked around in surprise to see the farmer’s son right next to him. Close up, his eyes were very blue indeed and his wide mouth was curved in that increasing familiar smile. Jonathan felt as tongue-tied as Mr Hammond had been previously in Belinda’s presence as he stiffly thanked the young man for his assistance. He seemed unfazed by Jonathan’s constraint.

“Just call me Cupid, or rather Nicholas, or even Nick, if you prefer,” he said with another dazzling grin, before turning gracefully to serve refreshments to the guests behind Jonathan.