A Demon Inside (MM)

But will the house be the sanctuary he had hoped for? Soon after moving in, Hunter realizes he may not be alone. And who -- or what -- he shares the house may plunge him into a nightmare from which he may never escape.

Sparks fly when he meets his handsome neighbor, a caretaker for the estate next door, but is the man salvation...or is he the source of Hunter's terror?

A Demon Inside (MM)

But there was someone. A very handsome, strapping someone who was staring down at him with a mixture of curiosity and amusement. The man was about Hunter's own age but tall, well over six feet, with broad shoulders, curly, unkempt blond hair, a full beard, and the most piercing blue eyes Hunter had ever seen.

The guy squatted down next to him. Hunter smelled wood smoke.

Hunter tried to stand, but his legs failed him. The day, so far, had been too much. He fell back on his ass and smiled at the guy, realizing he must look every bit the lunatic he worried he was.

"What happened?" The guy's gaze drifted toward Hunter's hand, still buried in the snow.

"You wouldn't believe me if I told you."

"I pulled a pan off the stove without a hot pad is all." Hunter found the coordination to stand, brushing wet snow off his ass. What was this guy doing in his backyard, anyway? "And you are?"

"I'm sorry. My name's Michael Burt. I work on the Beasley place next door. Caretaker, general handyman, and jack-of-everything-else." He nodded back toward a place behind Beaumont House, and Hunter suddenly remembered the little cottage he had seen on his first visit.

Hunter didn't know if he was up for making chitchat with a neighbor, not after all that had gone on today. And what had gone on, anyway? He looked at Michael Burt, wanting to speak, but the facility for language seemed to have momentarily deserted him.

Michael smiled, giving Hunter a glimpse of perfect white teeth with a tiny gap between the front two. This little bit of imperfection only served to make the man better looking. He furrowed his brows. "Is something wrong? You look like -- well, you should pardon the cliché -- you look like you've seen a ghost."

Hunter wondered if he should tell Michael about his day so far. Would he think him insane? Or better yet, was the perpetrator of his sparkling clean and ordered house standing right before him, maybe amused by Hunter's discomfort and fear? He hoped not. He had run away from people doing bad things to him. It would be just his luck if he'd only run to a place where worse things were done. But if Michael Burt hadn't unpacked for him, who had?

The thought of a human perpetrator was much more comforting, really, than the alternative.

Hunter found his voice. "I just moved in." He cocked his head. "And the oddest thing happened when I got up today."

"Yeah, I had all this unpacking to do and furniture to place, but when I came downstairs, it had already been done for me. Isn't that weird?" Hunter forced Michael's gaze to meet his own. "You wouldn't know anything about that, would you?"

"What do you mean? What would I know? I just saw you moving in yesterday. Today I was out back and saw you come outside. Thought I'd come over and introduce myself."

"You didn't have anything to do with it? Really?" Hunter felt his heart begin to beat a little faster. He realized he wanted Michael Burt to laugh and put his hands up in a gesture of surrender and say something like "You got me" or "We have some strange customs up here in Wisconsin."

But he didn't. "Um ... no. I wouldn't presume to go inside your house without an invitation. And as much as I'd like to welcome you to the 'hood, such as it is, I really don't have the time to do what you described. I've been on the phone and the computer most of the morning, taking care of some medical bills for Mr. Beasley. I just came out for a smoke -- I know, filthy habit -- when I saw you."

If Michael Burt was lying, he was a damn good actor. And Hunter couldn't really press the man, but what other explanation could there be?

"Of course it wasn't you." Hunter peered back into the kitchen and saw a haze of smoke still hanging near the ceiling. "I've never had this happen before, but maybe I did it all in my sleep. I've read about such things happening."

"Very weird. Are you sure you're okay? Would you like me to come in and have a look around?" 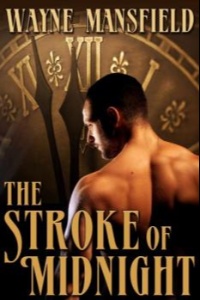 Two Alphas (Are Better Than One) (MM)
Alanna Barton
In Shelf
$4.99
Tweets by
sirenbookstrand