What are the things in life you’re going to regret?

Paul Carpenter is trying to atone for his youthful mistakes. That’s why he’s working on a finance degree to make his father happy, rather than pursuing his passion for art. He didn’t expect to spend winter in the balmy sunshine of a Florida RV park with the maternal grandfather he barely remembers, but with his leg in a cast and a paper to write, it’s the perfect way to avoid the distractions of his favorite holiday.

Then he meets sexy, hardworking Kevin Lombardo, the owner of the RV park. For Paul, Kevin's a distraction he can't -- or doesn't want to -- avoid. When Grandpa Louie, a self-confessed geriatric Casanova, infects Paul's laptop with ransomware, he finds himself working closely with Kevin on the borrowed office computer. He's also drawn into park life, seeing firsthand the passion Kevin brings to his work, and how genuine job satisfaction can create a family for all.

As for Kevin himself, he wants Paul to celebrate the joy of the holidays, despite the lack of snow and cold, and he doesn’t want him to settle for a life he doesn’t desire. With the help of Grandpa Louie and a handful of interfering park residents, can Kevin help Paul create a new holiday tradition they both can share? 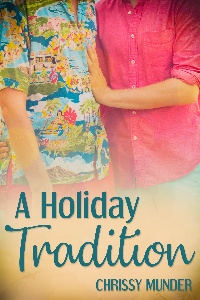 Despite all of Paul’s (admittedly halfhearted) protests, he found himself at the state park parking lot, dazzled by the wide expanse of white sand and turquoise water. The scene was straight out of a postcard, with plenty of sun and calm surf -- if you didn’t pay attention to the beachgoers huddled under the pavilion, all dressed in long pants and jackets zipped to their necks. Paul tilted his borrowed cap off his forehead, pleased to find some saner individuals like him wearing shorts and T-shirts down by the water’s edge.

Kevin opened the door and, rather than letting Paul out, held up a black plastic trash bag.

“What’s that for?” Paul asked.

“Give me your feet.”

Paul swung himself around, his legs dangling off the side of the seat. Kevin fit the bag over Paul’s foot and cast to his thigh.

“Hold this,” Kevin commanded while he grabbed a roll of duct tape from the glove box. A few quick rips and he had Paul’s cast sealed inside the bag like Paul did before he showered. Apparently satisfied, he pulled off Paul’s lone tennis shoe and tossed it onto the driver’s seat. “Just in case.”

“In case what?” Paul resisted the urge to lean in to Kevin’s touch. “I can’t do sand with these crutches.”

“Anyone ever tell you that you spend a whole lot of time focusing on what you can’t do?” Kevin used the seconds Paul took to process his question to reach in and, with one arm behind Paul’s back and the other under his knees, pull him out of the truck in a bridal carry. Without waiting for Paul’s answer, Kevin hefted him aloft.

“Hey,” Paul squawked, the bottom freefalling out of his stomach just like the one time he thought he’d try ziplining. He wrapped his arms around Kevin’s neck despite the truthful sting in Kevin’s statement. “What about my crutches?”

“Why do you need them when you have me?” Kevin swung Paul out in front of him and used his hip to close the truck’s door. “Ready for some Florida fun?”

“Oh my God,” Paul yelped and held on to Kevin with everything he had. The heat from Kevin’s body warmed him even more than his embarrassed flush. “Put me down!”

Instead of listening, Kevin marched them across the sand, handling Paul’s weight, cast and all, with ease. He stopped at the outer reach of the waves and slid Paul down until their chests pressed together.

“Don’t worry, I won’t let you fall.” His voice seemed rougher than usual, husky against Paul’s suddenly sensitized skin and he turned Paul so his back touched Kevin’s chest and his front faced the water.

“You’re crazy,” Paul half laughed, half breathed as his bare foot dipped into the surprisingly warm ocean. He’d expected much cooler temperatures, but he’d use this for bathwater compared to Lake Superior in September.

A faint breeze blew in off the water, carrying with it the taste of salt and the scent of what Paul could only call ocean. It was kind of fishy and kind of rotten, and different from the Great Lakes. The horizon beckoned, reminding him of the pirate stories and tales of adventure he loved to sketch out as a kid. Somewhere, across that vast expanse, were entirely new countries full of people living their lives. The sense of freedom made his head spin.

He leaned against Kevin, content to simply breathe in unison with the waves as they shushed back and forth. When was the last time he had stopped thinking and simply looked at the clouds and let his mind empty? Even in the hospital, every time he surfaced from the painkillers, he had worried about something, filled with anxiety he should be doing more.

“What do you think?” Kevin’s voice, coming deep from his chest, rumbled against Paul’s back.

“I could stay here forever.” Paul dragged his toe through the rocks and crushed shell that made up the beach instead of the sugary white sand he was familiar with. “But I wish I could go swimming.”

“Want to know how to spot a tourist?” Kevin asked.

Kevin affected a pretentious accent. “The northern snowbird is immediately recognizable from its southern brethren, with distinct differences in both apparel and behavior.” He tightened his arm around Paul and pointed to their right with the other.

A group of teens dashed in and out of the waves. Their tanned chests contrasted with the older adults, who waited with towels and jackets.

“No true Floridian would turn themselves into an icicle by swimming in December.” Kevin wrapped both arms back around Paul’s waist, his grip tighter this time and pulling them closer together. His heart beat strong and steady, as dependable as Kevin himself. 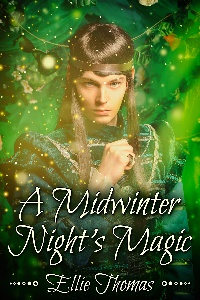