There’s something exciting about a new life in a new place and Cameron is enjoying making new friends as well as planning his wedding. However, he’s starting to feel overwhelmed by the family’s he’s found. They love him and are eager to draw him into their ranks which means he must learn the ways of the witch world and their customs.

Not only that someone is stalking Cameron. He’s certain it’s his fiancé, Cove’s family. However, Cove thinks it might be connected to their current case. After all, Cameron was attacked at a crime scene.

In addition to Cove’s family, Cove’s broke ex is back in town looking to pick up where she left off with Cove even if that means getting rid of Cameron by any means necessary. So, as the attacks on Cameron continue the suspects increase, but Cove is certain it can only be one person.

Is the Soap Killer after Cameron?

Covington Anderson plopped down in his chair at the kitchen table with a harsh sigh, and Cameron Sweetgrass glanced at his lover whose handsome face was starting to show signs of wear. His chocolate-brown eyes were a bit hard, as they always were when he was in the thick of a case that left him baffled.

He knew there was nothing he could do. In the city, Cove would shut him out when he worked a hard case. It was as if he thought if he didn’t talk about it too much, the ugliness of it could remain beyond the borders of their lives.

However, Cove had been all about the job, all about catching the bad guys and trying to make the world a better place. That alone brought the case into their home, allowed it to touch their lives.

Cameron knew there was nothing he could do about it, but this was a small town, not the big city. Here Cameron hadn’t expected anything like what they’d seen in the city. As a result, Talonwitch wasn’t so different after all.

He couldn’t eliminate the line of tension in his lover’s shoulders, but that didn’t change the fact he wanted to help ease it.

“Anything?” Cameron asked as he wiped his hands on his apron and went to smooth his hand over Cove’s soft black curly hair before dropping a kiss on the top of his head.

“Nothing.” Cove looked up at him even as he leaned back in his chair and reached out to caress Cameron’s leg, sending ripples of pleasure through him. “And I can’t seem to figure anything out. There just aren’t enough signs.”

This was the first time they’d spoken about the case, which involved a man found dead and half naked in a barn on a bed of hay, barely four days ago. The case had come out of the blue, shattering the crimelessness he’d been enjoying.

“Did you find anything forensically?”

Cameron shook his head. He was a new forensic investigator or crime scene tech. Cove was being resistant to him carrying a gun, but Cameron had just finished taking the course to qualify for a permit.

“There was nothing on the hay and the body other than lye and hints of glycerin.”

“Soap,” Cameron told him. “Nice soap. There was a hint of lavender and Kava kava. Anyone could have killed this guy. Including me.”

“Don’t joke,” Cove chastised. “You didn’t even know the witch.”

“No, but someone knew him and had something against him,” Cameron commented. “I’ve almost got dinner ready. Are you hungry?”

Cove gave him a smile. “Always, for your cooking,” he said. “I was thinking we should start talking about the wedding.”

“My gran cornered you again, huh?” Cameron said with a grin. “She’s getting antsy. I think she’s eager to have everything she lost with me.”

“I’m sure, but she’s going to test my patience.”

Cameron smiled and stroked Cove’s nape. “She’s got this idea about a big wedding with all my family—it’s still amazing to me.”

“Every time I made a wish on my birthday after my parents died, it was for a family. Now, I don’t just have one but two, and they’re both eager to get to know me, to love me.”

“You’re probably a bit overwhelmed, huh?” Cove asked, pushing his chair back and pulling Cameron down onto his lap.

Cameron snuggled against his broad chest and nuzzled Cove’s throat. “A little bit and the crazy thing is I haven’t even met all the family yet. Then, there’s the Starlings. I don’t know what I’m going to do about them.”

“There can’t be many of them left,” Cove said carefully.

The Starlings were a starling-buzzard mix. He had the buzzard genetics, and Cameron still wasn’t sure what that meant for him. His sense of smell and keen eyesight had been evident all his life, along with the nails that became a little more like claws when he was in a fight.

“I got a message from a woman claiming to be a Starling,” he said. “She left me a message asking to meet me.”

“She just said she was eager to meet me,” Cameron told him evenly.

Four months ago, when Cove had first moved back here and taken the job as police chief, Cove’s first case had involved several murders. In the course of solving it, Cove had stumbled upon a scrapbook that contained pictures of all the women two serial rapists and killers had raped. The men had eventually killed those women, along with the offspring that had resulted from said rapes.

However, Cameron had survived the attempt on his life merely because he hadn’t been home that night as he’d supposed to have been.

Cameron had decided not to seek that part of his family out. He hadn’t wanted to know anything about the people who’d spawned the killer who’d taken his family from him.

“Cameron, you can’t meet with her,” Cove said tautly. “She could be a killer too.”

Cove’s hand slowly stroked its way down between Camron’s thighs, and his breath lodged in his throat.

“Are you going to pretend you’re still sleeping?” Cove asked. His lips were firm against Cameron’s neck, and he nipped him lightly with sharp teeth.

“I’m awake,” Cameron murmured and rested his hand on Cove’s. Cove’s fingers pressed against his clitoris, and Cameron gasped.

He wasn’t used to that kind of stimulation. That part of his body had been off-limits, and Cove had gone with the flow ninety-nine-point-nine percent of the time, to Cameron’s relief.

Cove drew his hand back and slipped it down the pink briefs with a little white bow that Cameron had found on a fetish site. A finger glided over his clit to the entrance of his body, and Cameron closed his eyes.

The sensations washing over him were almost alien as they drew him in.

His shrink had told him if he was going to completely accept the man he was, he’d have to accept that part of himself as well. The best way to begin that process was to touch himself, to squat over a mirror and really examine the parts.

He couldn’t do it, but Cove wasn’t having any problems exploring his body right now.

“Relax, Cam,” Cove said in his ear. “We agreed you’d allow me to pleasure you, to touch your tight little pussy.”

“Cove—” He broke off as Cove’s finger dipped into the hot well.

“You’re wet,” Cove said in that low seductive voice of his. Then, he pushed a finger into Cameron’s pussy, the heel of his hand resting against his clit, and Cameron groaned as pleasure shot through him.

“I’ve been doing some research, and I’m eager to put what I’ve learned into practice.” He bit Cameron’s earlobe as he moved the heel of his hand against the engorged head.

“Not yet,” Cove told him and drew his finger out and pressed two back inside. Cameron hissed. “I want you and pressing my dick into your tight little treasure is part of having you.”

“You have a really nice ass,” Cove said as he began fucking his fingers in and out of Cameron. “But to say I won’t touch you here, that I won’t claim this part of you, is like saying I’ll buy a pack of hot dogs and never eat one.”

“You’re a sexy man,” Cove told him. “A responsive man who knows how to please me.” Cove withdrew his fingers. “Now, come over here and give me some pussy.”

He withdrew from him, leaving Cameron’s body bereft. Shaking, Cameron turned on his side and looked down at Cove.

He lay on his back and pushed the covers down, revealing his muscular body, the brown skin a shade of copper. Cove lowered the sheet farther, and his hand curved around his thick cock. Cameron got even wetter, his breaths coming out in uneven pants.

“I know how wet that pussy’s getting for me,” he crooned. “That ass is contracting in anticipation too, but if you intend to get fucked, you better climb up and take me.”

“When did you take off your boxer briefs?”

“While you were sleeping,” Cove told him. “Now, take off those panties, sugar,” Cove ordered.

Cameron moved slowly, shoving his underwear down and using his foot to drag it off once the garment was around his ankles.

Cameron straddled Cove and ran his hands up all that delicious muscle. Cove’s hands went to Cameron’s hips, and Cove tugged Cameron up just a little, just enough that his bloated cock slid through the lips of Cameron’s cunt.

The contact drew a harsh breath from Cameron and made him tremble even harder. Then, Cove moved, causing his cock to glide along the swollen lips even as it was pressed against Cameron’s clit.

His voice was like thick honey, and his brown eyes gleamed with a desire that made Cameron’s heart pound in his ears.

“You know I do,” he said weakly. God, he wanted Cove so badly he was getting wetter.

“Then, you know what to do about it.”

Cameron reached down and fisted Cove’s dick. He pumped the hard flesh and ran his thumb over the head, swiping away the bead of pre-cum.

Cameron leaned forward, his intent to take the thick length up his ass, but Cove tugged him back down. “You want that?”

Cameron lifted his hips and guided Cove’s prick to the soaking-wet pussy. He didn’t know if he’d ever get used to this, but he lowered himself slowly onto Cove. 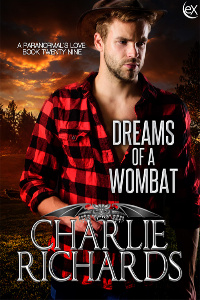