Shy and private, Charlie Labrecque has lived a lie for most of his adult life, choosing to marry a woman and father a child rather than come out of the closet. But now that he is divorced and sees his young son only half the year, he decides it is time to start being honest with himself. And his friends. Starting with his best friend, openly gay Bryce Hanson.

Bryce responds with his encouragement and promises to be Charlie's training wheels through the difficult transition. But now that both men feel like they can be honest with each other, new desires are found, and new truths are spoken ... 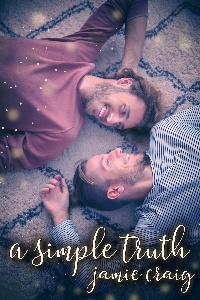 Charlie opened the third bottle. "You are bound and determined to get me laid, no matter what happens on this date, aren't you?"

"I'm bound and determined to get you laid? Who thought up this date? You. Who is going to have an extremely intimate and romantic dinner in the convenience of his own home? You. I think despite all your protests to the contrary, you're really looking forward to the prospect of getting laid."

When Bryce painted it like that it, it looked very bad. "I only wanted it here because I figured I could control it better." His friend's unwavering gaze compelled him into further confession. "Do I hope something happens? Yeah, I guess I do. Am I terrified about it anyway? Oh, hell yeah. I haven't even kissed another guy in years, Bryce. Something tells me Dean is going to want a little bit more than that."

"So what if he does?" Bryce tilted the newly open bottle, pouring the wine right to the top of his glass. "I know you said you don't just want meaningless sex. And I even get why you wouldn't want a string of flings. But you can't tell me you don't want somebody to touch you, that you're not hungry for that contact."

"Oh, I want it. I haven't stopped thinking about it since I decided to tell you the truth."

"What are you scared of? That you won't do it right?"

"Honestly?" He drained his glass. It was too warm in the house. He needed to remember to lower the thermostat the day of the date. "That it'll be over before it really gets a chance to start because I'm too excited."

"Having seen Dean, I don't blame you for being worried about it." Bryce licked his lips, and his face seemed a little flushed. "You could find a way to take the edge off."

"You mean jerking off beforehand?" Charlie shook his head. "I'm already doing that."

Bryce opened and closed his mouth, then returned to his wine. The food on both plates was utterly forgotten, and Bryce's eyes had a new shine in them. "You've been jerking off for the past two weeks to prepare for your date?"

"No. I've been jerking off ever since I decided I was going to come clean with you."

Bryce turned in his chair to face Charlie fully, tucking his foot under his knee to fit more comfortably. Charlie frowned, but he didn't move, or stop Bryce from cupping the back of his neck. His fingers almost felt cool against Charlie's flushed skin. Bryce leaned forward, his mouth coming within an inch of Charlie's before he paused.

"You should stop me."

"No, he's not your boyfriend yet. But if I kiss you, I'm probably going to want to kiss you again. And again."

His throat tightened. "You've drunk your wine too fast."

"Yeah, I probably did. Doesn't change what I said."

"You're my best friend." Somehow, that felt like it should make a difference.

"Maybe that's why I want to kiss you senseless right now. Maybe it's that and the wine."

Charlie smelled it. And the Cajun spices from the fish. And the cologne Bryce preferred, the one that always made Charlie think of their hikes when he couldn't stop staring at Bryce's ass. They combined into a cocktail that made his mouth water, and he had to swallow before he did something stupid.

He just said the something stupid instead.

"Half the time when I jerk off, it's not because I'm thinking of Dean," he confessed.

The Adventures of SuperTroy (MM)
Drew Hunt
In Shelf
$4.99