Twenty-year-old Tarquin is smart, tactless, and braver than he knows. He's also been Mage of the Realm of Kelor for two years, taking the title from his mother after she died protecting Kelor from a terrible threat.

Mages, unlike all other magicians, give their blood in exchange for far more powerful magic. Unfortunately for the Mage of the Realm, there's always the chance one day Kelor will need magic of such potency that a mage will have to give not just their blood, but their life. Tarquin's mother already made this sacrifice, and Tarquin knows it's likely also his fate.

While on a quest to heal his brother, who is dying because of Tarquin's reckless mistake, Tarquin is attacked by a horrific, flesh-eating monster. He's saved by an enigmatic and mute young soldier, called "Five", who is cursed with a terrifying appearance that conceals the heart of a knight. There's an almost instant attraction between the two men, but no time to explore it. The monster's attack is the harbinger of a new invasion.

With Kelor helpless, the realm's only hope lies with Tarquin. Just as he feared, his sole choice is to sacrifice himself the way his mother did, in exchange for magic strong enough to destroy the coming evil. He's prepared to give up his life to save the realm, but before the battle is over, he'll be faced not just with his own death, but the death of everyone he cares about.

Including the cursed soldier he's come to love. 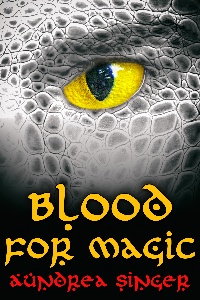 Tarquin locked the Kawj door with mage magic. Five growled when he saw the blood, but went quiet as they walked in rapid, uneasy silence back to the stairs and climbed into the chapel again. The pull of the Kawj had faded, but the ghost of the sensation was a slow, insistent tap in the back of Tarquin’s mind.

Five was seething. Tarquin could tell by his icy, narrow glare when he watched Tarquin close and lock the trapdoor. His tail lashed like a whip against his legs. When Tarquin cut himself one more time to make the wards, Five's nostrils flared and he snarled.

In answer, Five stalked to the trapdoor and stamped on it, hard enough that the wood creaked despite the wards. He glowered at Tarquin, then stood in front of the trapdoor with his arms crossed, as if he would physically prevent anyone from opening it.

“You’re saying you don’t want me to go down there again. That’s sweet,” Tarquin said tiredly, “but we both know I have no choice.”

Five shook his head rapidly. He uncrossed his arms to point in the direction of the harbor.

“I’m not going to Beragun,” Tarquin said. “And I’m sure Prea won’t either. Not with the capital at stake. And unless you plan on throwing me over your shoulder ...”

“Don’t even think it,” Tarquin warned him. “I won’t let you stop me. This is ... my destiny as a mage.” He scowled. “I hate the way that sounds, but it’s true. I don’t want to die, but unless the gods themselves intervene -- and we both know they won’t -- in a few days the haldur are going to be storming our walls. And when they do, all Elora’s watch soldiers or Ainya’s shields or Camma’s ballistas or all the magic in the Realm won't stop them. Except mine. But I have to pay for it.”

Five shook his head again, deeply upset. Then he stepped forward and hugged him.

Tarquin hugged Five just as fiercely. “For what it’s worth, I don’t want to do it either.”

Five made a noise that sounded a little like he was in pain.

“I know.” Tarquin rubbed his palm up and down Five’s back, trying to be his comfort now. He hadn’t really done this before, and it startled him that he could feel every nub and edge of Five’s spine, even through his clothes. The bones seemed ridged, like an animal’s. “You’re so thin.”

Tarquin sighed as he kept rubbing Five’s back. He slid one hand up the nape of Five’s neck, into his hair. It was definitely soft now that it was clean, but it still felt like thick wolf fur rather than anything human. It was another part of Five’s mysterious past, and as unique as the rest of him.

Only Five wasn’t supposed to be like this. This wasn’t Five’s true form, and Tarquin would never be able to fix it. Just like he hadn’t fixed Faladir.

“Maybe Prea and Edonay can find a way to turn you back into what you should be. After,” he said.

The response to his words was a shudder that traveled all the way down Five’s body, and a tiny, broken noise that spoke volumes for having no language in it. And then he let go.

Five was looking at Tarquin with such intensity, it set his heart to pounding. His wyvern eyes gleamed like gold in the light, unearthly and beautiful. Five stepped forward and cupped Tarquin’s face in one of his pebbly hands. Then Five leaned in and kissed him.

This kiss was different from the one in the sickroom. There was desire in this, but not the same kind of need. This time Tarquin could practically taste Five’s longing. Longing and regret, and sorrow, like the trace of salt water on his lips.

Tarquin buried his fingers in Five’s hair and kissed him back, trying to show him all the things he wanted so badly to say, but never would. Not now. There wasn’t time.

The gods were kind and fair and capricious and cruel. Because they’d sent this strange, fantastic enigma of a person into his life just in time for Tarquin to be ripped away from him. He was grateful to have known Five at all, but grief stricken that he had no choice about losing him. He’d never had a choice. He was Mage of the Realm, and he’d always known how he would end.

In days, Tarquin would be gone. This moment was everything. This was all they’d ever have.