David and Andrew Book 3: The Next Generation (MM)

Brad Sturgis, adopted son of Andy Barnes and David Bennett, is all grown up and ready to face life with his boyfriend, Hank Reynolds. However, he soon discovers life away from the Bennett-Barnes household proves much trickier than it seemed when he was growing up.

Brad finds many things in Hank’s work as a horse trainer competing for the man’s attention and affection. The time-consuming nature of the equine show world and the constant demands of the clients Hank coaches -- their interest in him sometimes goes beyond that of trainer/rider -- test the strength of the bond between the two men.

Will Brad learn to face such challenges with courage and good humor as his adoptive parents did before him? Will the next generation prove to be as tough and as tender, as solid and as steadfast as the one before? 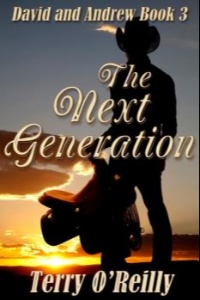 David and Andrew Book 3: The Next Generation (MM) 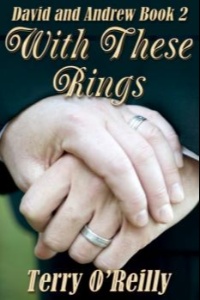 Hank started feeding the horses and Brad began mucking out the stalls. Soon other trainers and barn staff were arriving to care for their stock. As Brad walked down the aisle with the muck bucket and pitch fork he heard raised voices. He turned and saw Reginald Farthington in heated conversation with one of the grooms.

“I don't care the damn horse hasn't been fed,” he yelled. “He can eat later. Diablo’s my horse and I'm going to ride him!”

“But,” the other man said, “Mr. Towers ain't gonna like it. He is very strict about how his horses are --”

“Mr. Towers is no longer my trainer, and the horse belongs to me!” Reggie shouted back. “I'm gonna ride.”

Brad shook his head and headed off to Desi's stall. Man, I'm glad he isn't one of our clients, he thought.

Sometime later Hank stopped by to see how Brad was doing and offered to help him finish up the stalls. Brad told him he only had two more and he'd be fine. If Hank had something else to do he should take care of it.

Hank admitted he'd like to watch some of the riders who had come in to work their horses. “I can size up the competition,” he said with a chuckle and left.

When he finished the last of the mucking Brad went to find his partner. Hank was in the arena standing at the rail talking to Reggie, who sat astride his horse. Surprised, Brad stopped and watched from a distance. Reggie nodded and rode off into the sparsely populated warm up pen. He trotted his horse and then broke into a canter.

Brad saw Hank nod and heard him shout, “That's it. That's the idea.”

Reggie smiled and gave him a thumbs up as he brought his sorrel gelding back to a walk. “Thanks,” he called to Hank.

Brad walked up and stood next to Hank. “What's going on?” he asked apprehensively.

“Reg was havin' some trouble gettin' his horse to move the way quarter horse judges are gonna want to see 'im go, so I gave him a couple of tips. The horse is really nice and Reggie's a good rider. Just not used to the way we do it.” Hank said as he gave Reggie a wave and turned to leave the arena.

Brad looked at Reggie once more. He was cantering again, seeming to concentrate on how his horse was moving.

Brad turned and caught up with Hank. “You're not thinking of --”

Hank chuckled. “No way,” he said. “I've got my hands full with the clients we have already ... and that one,” he pointed over his shoulder with his thumb without looking back, “wouldn't be an easy keeper.” He used the term horsemen do for a horse that is no trouble to keep fit and is trained.

Brad was relieved. However, though he didn’t know exactly why, something told him he hadn’t seen the last of Reginald Farthington the third.

Love in the Land of Fire (MM)
Rebecca Brochu
In Shelf
$4.99
Tweets by
sirenbookstrand