A young half-breed Blood Demon called Scrub has spent four hundred years aboard the slave ship Goliath.  He's eaten his way through the crew who abused him for decades, and sees a feast on the horizon.  Two humanoids, Hamish and Cruz, on a mission to salvage the old ship.  Scrub's starved of affection and food, and isn't sure whether to eat them or love them forever.  Tough choice.  Deciding to wait and see, his curiosity takes over, and he follows them back to their ship, already well on his way to falling in love.  A misunderstanding leads him to flee back to Goliath after he claims his humans by mistake...triggering a chain reaction that will have startling consequences.  Then his mother, Firth, arrives.  Arrogant, condescending, and determined to bring Scrub back home to take over ruling her planet, Scrub isn't best pleased. There's only one solution—chuck her out the nearest air lock until she behaves.  Job done.

Heat Rating: Sextreme
Word Count: 23,365
10 Ratings (4.5)
Menage a Trois/Quatre Science Fiction Alternative (M/M, Gay)
In Bookshelf
In Cart
In Wish List
Available formats
HTML
ePub
PDF
Mobi
Cover Art by Harris Channing
Reviews
I loved this book, Scrub was so adorable, and I loved the way he put his mother in her place, her character made me laugh and infuriated. I am so hoping there will be more to this series I would highly recommend this book
Speedy
Read more...

Planet Hydra: Triad of Trouble (MMM)
Jools Louise
In Shelf
$3.99
All Books In Cart
All Books In Bookshelf
Excerpt

Easing back on the thrusters, Hamish McFadden eyed the mammoth spaceship ahead with a mixture of distaste and awe. A descendant of a planet twinned with the ancient country of Scotland, Hamish was a space traveler of some three hundred years. And most of that had been spent with his lover and husband, Michael Cruz, salvaging useful junk from damaged crafts floating through the voids of space.

“She’s a big, ugly thing,” Cruz said, his big brown eyes possessing the same mix of emotions that Hamish felt as he viewed at the hulk drifting toward them. The distaste was due to the fact that this heap of broken scrap metal, Goliath, had been a brothel and slave ship. A floating sex palace, allegedly, that had disappeared from everyone’s radar about a hundred years ago. It was rumored that the vessel had been besieged by a deadly creature, known as a Ravager, something nobody had ever seen. Similar to mermaids of old, Ravagers were mythical beings, but had been gifted with a savage reputation for hijacking spacecrafts, shredding their crew and passengers, before deserting their prize after punching large holes in the hull before disembarkation.

“That doesn’t look like a Ravager’s marks,” Hamish muttered, frowning at the asteroid-sized crater toward the stern.

“I reckon she drifted too close to an exploding star or something,” Cruz replied, tilting his head. Hamish glanced sideward, and felt that twinge he always did, even after so long, as he studied Cruz’s gorgeous face. Cruz had the face of a fallen angel, his lips plump and ripe, his nose strong and proud. His brown eyes hinted at Italian ancestry, but since Earth was practically deserted, now, nobody really knew. Cruz and Hamish were refugees from that final war. The Ultimate War, as it was called, that had decimated the entire planet, rendering it uninhabitable, except for the tiny pockets of life.

“Yeah,” Cruz drawled, a smile glinting at the corners of his mouth. “But usually not to ships like this one. The Goliath had a pretty decent crew, by all accounts. Wonder what happened to them?”

“If it was Ravagers, then the crew and any other lifeforms are long dead,” Hamish stated confidently. Nobody survived the Ravagers.

“Shall we suit up?” Cruz asked, punching a few buttons on the console to halt their ship, Braveheart. A nod to Hamish’s heritage.

Hamish turned to his husband, waggling his brows teasingly. “I need some cream first,” he suggested seductively.

Cruz shot him a dry look. “Again? We only just fucked, sweetcheeks.”

Hamish pouted. “I only get one fuck per day, now?” he protested. “That’s what marriage does for you.”

Cruz chuckled, unhooked himself from his seat, then grabbed Hamish and hauled him from his chair, kissing him hungrily.

Hamish whined pitifully, hearing Cruz laugh softly, then grunted when his husband shoved his ten-inch beauty right to the hilt. Hamish closed his eyes, loving the feel of Cruz’s thick dick, right where he wanted it.

“The things I do for love,” Cruz taunted, ramping up as he began to plow Hamish into submission, jerking Hamish with each powerful stroke. Hamish shoved back at each hard plunge of Cruz’s dick, driving his lover deeper, arching his back in ecstasy. His own cock bounced in time to Cruz’s surging rhythm, and he gripped it tightly, jacking off in time to the strong thrusts.

“Now can we suit up?” Cruz asked, easing from Hamish’s snug chute, arching a brow in mock irritation.

Hamish grinned salaciously. “Baby, what are we waiting for?”

He dodged Cruz’s slap, pulling away, and grabbed for his flight suit and helmet. A couple of laser pistols were added to his uniform, plus a small device which was used to communicate with most lifeforms in the universe.

Staring out of the portal, the sole resident of the slave ship, Goliath, viewed the sexy show on the Braveheart’s bridge avidly. With the ship so close he had a pretty good view of their antics. The lovers were teasing one another, judging by their body language. And smiling. That was a new concept. Fucking involved a lot of pain, definitely no smiles, or any other emotion, except anger and irritation. He’d never seen such a thing. It made him curious about the two humanoids. Enough that his hunger for their flesh as a food source abated, and he wanted to know more about them as individuals. What would it be like to have someone smile at him like that? Lovingly. Respectfully.

Scrub giggled at Hamish and Cruz’s antics as they flicked water all over the place. He’d never met anyone with such a sense of fun as these two. And they clearly loved one another implicitly. It warmed him all over that they included him in their play. Almost as though they cared about him. Which was silly. They’d only been together as a trio for three weeks. Each night they shared a bed, sucking one another off and then sleeping the night away. Mornings included communal showering, and then a scrumptious breakfast, followed by a full day of scouring Goliath for recyclable materials.

Squealing, Scrub found himself between his friends, laughing helplessly as he was groped and fondled everywhere. His cock reacted predictably, erupting to renewed life, and he’d never felt happier He ducked, kneeling before Hamish, and swallowed the man’s big dick, mouthing it voraciously. Hamish grabbed two handfuls of Scrub’s hair, massaging his scalp steadily as he fucked Scrub’s mouth.

Scrub felt Cruz behind him, moaning when his lover fingered his ass, brushing lightly against his little hole, which quivered nervously.

Scrub moaned again, shivering as a thick finger pushed against his tight rosebud, so carefully that he barely felt the pinch, tensing against the fullness entering him. Oh god. So good. Cruz squeezed his ass, massaging his cheeks, then parted him wider, his finger digging deeper, to the first knuckle. Panting, Scrub whined for more, staring up at Hamish entreatingly.

“He looks like a god,” Hamish growled, slowing his thrusts, traveling from root to tip in smooth strokes, filling Scrub’s mouth over and over. Saliva slid down the sides of Scrub’s mouth, water pummeling over him, and still he kept his gaze locked to Hamish’s, needing the connection. “Take me, baby. That’s it, sweetie. Suck me, little darling.”

Scrub soaked up the endearments like a sponge, holding them close to his heart, feeling himself melting into the floor. Hamish showered him with compliments all the time, and Scrub couldn’t get enough of them. He sucked harder, moaning blissfully, tickling his nose with Hamish’s golden pubes as he deep-throated his lover, being extra careful not to scrape him too hard with his teeth. Hamish ramped up the tempo again, and was soon fucking Scrub’s mouth with abandon. Scrub clung on, gripping Hamish’s strong thighs for balance, bouncing with each thrust.

Cruz’s finger was joined by a second, scissoring and stretching his ass gently. He moved restlessly against the explorative touch, fucking himself on the invaders, impaling himself again and again. He found he loved being finger fucked. Cruz caressed and seduced, never forcing him, never brutal. And Scrub melted just a little bit more.

“Ready to take my cock, baby?” Cruz asked, blanketing Scrub’s back, his heat warming Scrub to the core.

Nodding, Scrub tasted Hamish’s load as Cruz entered him slowly, sinking inside incrementally, kissing his cheek, and gentling him with caresses to his butt and flanks. Hamish knelt before Scrub, kissing him passionately, murmuring approvingly in between smooches.

“There ya go, sweetie,” Hamish growled lovingly, cupping his face. “You take him so well, darling. That ass of yours makes my mouth water. Stunning. I’ll take it next.” Scrub shuddered, gripping Hamish’s forearms, feeling Cruz bottom out. His mouth was full of Hamish, his tongue tasting his lover’s flavors, enjoying the feast. Cruz paused for a moment, then began to thrust gently, shallow strokes at first, then increasing speed.

The slap of their flesh meeting was music to Scrub’s ears, and he keened with pleasure. He’d never been made love to in his life. Never had sex in his life. Not properly. He’d been trained to suck off, but the slavers had been afraid to go near him once they knew what he was. And yet these two humans were making love to him. Unafraid, and so sexy in their desire for him it made him want to cry.

Cruz moved faster still, groaning ecstatically with each thrust until he was pounding into Scrub with an energy that revitalized every part of Scrub. He felt his insides tumbling around, his heart pounding with excitement, and he bared his fangs, then sank them into Hamish’s lip. Not shredding, not eating. Claiming. His saliva mixed with Hamish’s, and he heard Hamish howl, arching his back in surprise, as he came, spattering his seed over Scrub’s genitals and upper torso, his blood flowing like nectar on Scrub’s tongue.

Panting, returning to sanity, he cringed as he realized what he’d done. He’d just claimed two humans. Fuck. What did he do now? They’d banish him, now, for sure. Who wanted to be claimed by a Jeboo?

Crying in distress, he wrenched free of his lovers and leapt his feet, then ran away, heading to the one place he always went when he was upset. His quarters on the Goliath. 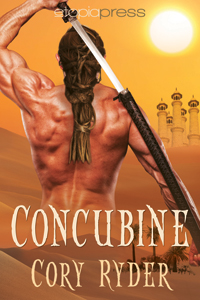