Never Ever On Sunday

Like a thief in the night, Nadya Howard’s mother meets an untimely death, leaving her daughter’s life in shambles.

Nadya’s good-for-nothing boyfriend turns on her and beats her within an inch of her life, only to lose his own. After she heals, she has one goal—to uncover the truth. Little does she know how much danger lurks around the corner…

Detective Ryker Mitchell is the investigator on her case, but he becomes more than that. Can Nadya ever trust anyone again? There is no room left in her broken heart for love because betrayal hurts just too much… 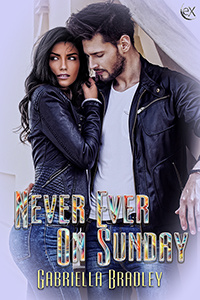 Never Ever On Sunday

Three men, wearing heavy coats, scarves wrapped around their faces and hats pulled to just above their eyes, entered the shelter, and one of them dashed toward her. Before she realized what was going on or had time to react to what she thought were pesky reporters, he threw a hood over her face and something pressed against her nose and mouth. Chloroform… Her phone dropped to the ground as she grabbed the arm in front of her to push it away. She held her breath until they pulled the wad away from her face. Unceremoniously, someone threw her over a shoulder like a bale of flour, or it felt like a shoulder, and then everything went blurry and hazy.

Nadya hadn’t inhaled enough of the stuff to pass out completely, yet she must have lost consciousness for a bit. Nausea attacked her when she surfaced from a deep abyss. Her wrists and ankles were bound, and she lay at an awkward angle in a confined space. She heard the soft humming of an engine. She realized she was in the trunk of a car.

She could hear the men talking. Their voices were muffled, but she understood what they said.

“Jerry, you didn’t get her fucking phone! How fucking stupid can you be, you moron.”

“Well, sorry…we had to act fast while the coast was clear.”

“What does it matter anyway?” another voice joined the conversation. “She don’t need no phone where she’s going.”

“What the fuck do you mean? The boss told us—”

“I don’t give a flying fuck what the boss told us. He won’t be any the fucking wiser. I’ll call him in a couple of hours, and I’ll tell him it’s done. The boss never asks questions. He don’t want no details. I’ve got other plans for the little lady, plans that will line our pockets.”

“There’s this fucking place in Mexico, a brothel. They’re always looking for hot chicks, and they pay damn good money.”

“Sergio, how the fuck will we get her across the border? And don’t they always want young chicks? This woman ain’t no teenager.”

“Stupid prick. I’ve got customs in my pocket, but we won’t need to cross the border. I’ve got a contact on this side, in San Francisco. Let’s get some food before we head further south. As for the bitch, she don’t look no older than eighteen. We’ll just lie about her age.”

They stopped talking. Nadya squirmed, tried everything to loosen her bonds, but her wrists and ankles were bound too tight.

A while later, the car stopped. She heard the men get out, and when she no longer heard their footsteps, she began to shout for help. She yelled until her throat was sore. No help came. It had to be a truck stop. Lifting her legs, she banged with her boots and shouted again.

After what seemed a long time, her throat hoarse from shouting and yelling, she heard the men return. She heaved a sigh. At least they weren’t going to kill her…but…a brothel?