Science officer Shera is on her way back to her home planet when they receive a distress signal from the small planet L’Khan. She offers to take a team down to investigate.

Captain Chevanto is devastated when the team returns without Shera. Not only is she his first officer, his number one, but without her knowledge, he has fallen in love with her. They search for her for days but cannot find her.

Who has kidnapped Shera? And why? 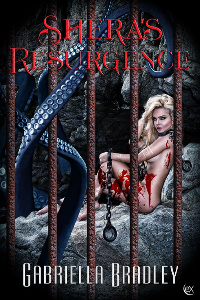 Shera listened to the persistent sound of a siren emanating from L’Khan’s surface, a small planet in the Garisha system. “I think it’s a distress call,” she told Chev, her captain.

“From what? We’ve scanned the planet. There are no signs of life. It’s unpopulated.”

“A team from another ship? Stranded maybe? Survivors from a crashed ship?”

“All possible, but why a siren? And why no signs of human life? Or ships.”

“Beats me. Maybe, whoever sent out the signal to begin with, is dead? No one could survive down there. But we should investigate.”

“So what do we do, Shera? I, for one, would like to get home. This mission has taken us long enough.”

“Captain, since when do we ignore a distress call? Braka, what’s your take on this?”

Braka, their navigator, pulled a face. “No idea. We shouldn’t ignore it.”

The captain ran his fingers through his already unruly black hair. “So be it. Shera, want to do the honors this time?”

“Sure. I’ll take Braka and Lupino. And Lanari, in case medical treatment is needed.”

“Be careful. The topical scan shows heavy vegetation, although no sign of animal life.”

Shera tapped her com. “Lanari, Lupino, meet me in shuttle bay one. We’re going down to L’Khan to check out a distress call.”

Followed by Braka, she hurried to the shuttle bay. Lanari, holding her medical kit, was already there waiting for them, Lupino by her side.

Shera took her seat at the controls. “Captain, coordinates?”

She punched in the coordinates Chev sent to her and stabbed the ignition button. The shuttle bay doors slid open, and they headed down to the planet.

“Thick vegetation isn’t the word for it. Where the hell do we land?” Shera said as they flew over the most extreme dense vegetation she’d ever seen.

Braka checked his scanner. “There’s a mountain just up ahead and a clearing.”

“Understatement of the year.” Shera landed on the clearing close to the mountain.

“The signal is actually coming from around here,” Braka told her.

They left the shuttle, Braka taking the lead. They skirted the base of the mountain until they came to a large cave entrance. “It’s getting stronger. Coming from inside the cave,” he said.

No response. She tried again. “We’ve lost communication with the ship,” she told her teammates.

Braka, Lupino, and Lanari tried their coms with no results.

Shera took her phaser pistol out of its holster. “Okay. Let’s go in.”

They lit their flashbeams. The cavern was huge, with large dark slimy boulders everywhere. “Still got the signal?” Shera asked Braka.

“Let’s split up. Lanari, you go straight ahead, Braka, you and Lupino take the right, and I’ll go left.”

Shera navigated around the boulders and went deeper into the cavern. Suddenly, out of nowhere, a snake-like appendix wound around her, pinning her arms and hands tightly to her body, effectively immobilizing her. Loud clicking invaded her brain, making it impossible to think, to react, or make a sound to alert her teammates. Her light and phaser had fallen. In the dim light shining up from her flashbeam, she could barely make out the monster that had accosted her, but she saw enough to almost make her puke. A terrifying creature, the size of their shuttle. A vile stench entered her nostrils… And then everything went black.