To a casual passerby, it's just a small country bar in the middle of nowhere. To a vampire in the know, it's the most popular hangout in the entire state of Texas. To Serena Darville, though, Ruby Red is the last hope for an answer to all her deadly troubles.

Walking into the bar to retrieve the bracelet she needs to save her father's skin -- and her own -- is the most dangerous thing she's ever done. She doesn't need or want a vampire's help. Not even if that vampire is peacemaker Max Markow, there at Ruby Red with his own grudge to settle.

When an unexpected bar fight gets them locked away in a cellar to die, Serena and Max are forced to work together in order to escape. In such cramped quarters, passions flare. All they have is each other, but only time will tell if that's enough to survive. 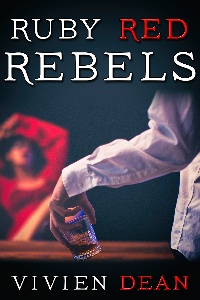 "Why is it you're here again?" she asked warily. She was discovering Detective Max Markow -- or Peacekeeper, or whatever title he held -- had a tendency to avoid answering questions. This repeating herself was going to get very old, very fast. "Is it about the bracelet?"

Max cocked his head and took a step closer. "Now, I don't remember telling you it was a bracelet, darlin'. I thought you said you didn't know much about Jimbo's business dealings."

But she was sure he'd mentioned it. He'd recognized her surname, asked about Jim, then brought up the whole issue of looking for the mystical ...

Serena held herself perfectly still, unblinking in spite of the sinking sensations in her stomach.

Thingamajig. That was what he'd called it. She had been careful about sidestepping any knowledge of what he was talking about before, but now, with her hazardous thoughts and betraying body, she wasn't as focused. In fact, she was downright distracted, like he was a shimmering mirage in the middle of a desert and she'd been wandering for days.

"If you're here because of the bracelet ..." His voice was low and even, his paces toward her matching it. "This would be the time to tell me. Because Ruby Varnes isn't someone to trifle with. She's goin' to be the meanest vampire you will ever know, if you get out of here alive to tell the tale, that is."

Serena refused to back away. "A few seconds ago, you were telling me not to worry. You can't have it both ways."

"I don't know what you're talking about."

Max came to a halt right in front of her. "I'm not stupid, Serena. I can tell you're lying. And as much fun as this is, goin' back and forth with you, all it's goin' to do is get one or the both of us hurt. Or worse, dead. Now, I didn't come here tonight, looking to get staked. And I'm pretty sure you'd rather walk through that front door and get back to your safe little life. But none of that is goin' to happen until we lay down our cards to see whether or not we're on the same side here."

Gone was the good ol' boy routine. Gone was the joking manner. Gone, even, was the smile that had lit him up, both upstairs and down. This was Max stripped bare of pretense. Not even Serena could doubt him now.

"I need that bracelet," she said. "I'm not leaving here without it."

"You still haven't told me why you're so interested in it."

When Max wasn't smiling, his eyes got even more intense. They bored into her, as if capable of reading what was written in her thoughts by only a glance, and after a moment of scrutiny, he nodded.

"Word is, Ruby's looking to sell. My job is to make sure that doesn't happen."

A ghost of his amusement returned. "Because I don't like seeing good people get hurt, even if I am a vampire," Max said softly. "And the kinds of people who'd be interested in that bracelet, well ... let's just say, better the devil you know."

Serena knew exactly what kinds of people would be interested in the bracelet. The same kind who had no qualms about threatening an entire family for the sake of a few dollars. The same kind who'd follow through on their promise to draw and quarter her father, then drink from the remains. The same kind who promised even worse for her if they didn't get what they wanted.

She took a deep breath. His gaze flickered for a second to her rising chest before returning to her face.

"There's just one thing wrong with that," she said. "I don't know you."

"Maybe." Max leaned in until his nose almost touched hers. "But I'm all you've got." 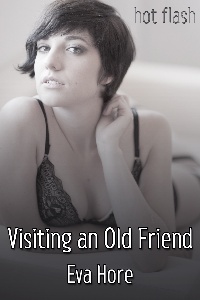