When Cabel investigates a silent alarm, he doesn't expect to find a mystery or have to hunt down a group of women.

When the Archon of the city told the women they could stay but would find no help from the dragon enclave, half dragon, Regine, expected to deal with problems on her own. Finding a Sentinel at her door was a surprise. Even more astonishing is Cabel’s claim that she’s his mate as well as that of his partners, Quinn and Adrian.

After he takes her home, the men claim her. The heat and attraction between them is searing hot and Regine can’t deny the connection between them. Unfortunately, someone doesn’t approve of her joining the enclave. Regine is attacked. As they try to discover why someone wants to hurt her, Cabel, Quinn and Adrian protect her. Her attacker isn’t giving up and they have to find a way to stop him before their woman is taken from them.

They took the elevator up to the fourth floor and stepped off. As he did, Cabe tensed. Something tugged at the dragon within him. The scales of his dragon slithered just under his skin, and his vision changed, sharpening before flicking back to his normal vision. A low growl rumbled from him. Cabel sniffed. Nothing smelled out of the ordinary. He tilted his head. Nothing and no one in the hallway. So what had his dragon up and alert?

“Something wrong?” Dael stopped and looked around.

“Not that I can see, but something has my dragon a little fired up.” Cabe shrugged. He’d figure it out later, after they got some answers from this woman. They had to go see at least two other women today.

“Give me a heads up if you figure it out. There’s the woman’s apartment.” Dael pointed to the right.

“Good. Let’s see if she’ll answer the door.” Cabe knocked on the panel.

He stood and waited and then knocked again. A lock clicked as it was turned. The door opened slightly.

“You’ve got the wrong door," the brown-haired woman said and closed it again.

Damn, fast woman. He knocked again. As if a delay would stop them. If necessary they’d break it down. The door opened again.

“Look, I’m not the one who buzzed you in. You have the wrong apartment.” The woman only slightly opened the door.

“The manager buzzed us in. I’m here by order of the Archon of the Ashen Bay dragons.” Cabe planted his hand on the door. She wouldn’t shut that on them again. He held up his hand, showing the dragon head bracelet. Most people knew of the bracelets even if they didn’t know what it meant to wear one.

“What could the Archon of the dragons want?” She rolled her eyes. “And who are you?”

“I’m Sentinel Cabel Reardon and he is Sentinel Dael Hughes. We have some questions to ask you about last night.” Cabel pressed the door open. “And you are Regine Daniels”

“Last night? What about last night?” Regine frowned, but didn’t move back.

“We’re here to talk about why you left the club last night. We want to know why you left, how you knew something was wrong, and how you got out. And we’ll talk about it in your apartment.” Cabe wouldn’t stand out here discussing this. The woman was pushing her luck.

“Sure, if you’d wanted me dead, you’d have already flamed me.” She sighed and stepped back.

“We could have done that before you got in the building.” Cabe raised an eyebrow and stepped into the apartment. A sweet coconut scent met him, but mixed with that heady scent was the essence of female dragon. What the hell? There shouldn’t be any dragons outside the enclave. Females were always guarded. They were more vulnerable to attack.

The curvy woman had changed from the gray business suit she’d worn earlier. Now, a short-sleeved, purple T-shirt stretched across her full breasts and a long skirt hung from her hips.

“Oh, damn.” Dael followed him in and stared at the woman. “How long have you been here?”

“Long enough.” She shrugged and locked the door when she could close it.

Cabe took a deep breath through his mouth. A rush of fire boiled through him. He growled. Well, that explained why his dragon was rising in the hallway.

“Freaking male dragons. Always with the posturing and growling. Get the questions asked so I can get on with my life. I do have things to do. I may have come home, but I need to go back out.” She walked around them and took a seat in a maroon armchair adjacent to a white couch.

Cabe clenched his fist. Fucking hell. He growled again. She would choose somewhere away from him. Dragon scales ran over his arms, and his palms itched with the urge to grab her and pull her close. He exhaled. Have to get control until she answered a few of the questions. There wouldn’t be much talking if he picked her up.

“What do you want to know about the club last night? Did something happen?” She clasped her hands together in her lap.

“Yes, something happened. Why did you and your friends leave?” Cabe leaned forward.

“There was something off about that club. Just something not right.” She shrugged.

He inhaled. A faint acrid tang hung in the air. The woman was holding back and hiding something.

“Yeah, try that with someone who can’t tell that you’re not telling the full truth. I can smell the lie amid your words.” Cabe drummed his fingers on the arm of the couch.

She sighed and waved her hand. “It’s not exactly a lie. Just not the full story. I’m not full dragon. I’m something else, too. I know things sometimes, and that night, it wasn’t safe there.”

“What else are you?” Cabe drew in a sharp breath. “Is that why you haven’t contacted the Archon? You have ties to the other part?”

“No, I don’t even know what I am other than dragon. I have no ties. And I contacted the Archon when I came into town over two years ago. He said that I could live in the city, but as a halfling I wasn’t part of the dragon enclave and would have no protection from it.” She lifted her shoulders. “Not the first time I’ve heard crap like that and I didn’t expect anything different.”

Adrian strolled up behind Regine and scooped her into his arms.

Regine squealed and wrapped her arms around his neck. “Hey, you could give a girl a heads up.”

“Evil dragon. What do you have planned? I thought we’d relax and maybe cuddle on the couch.” She stroked the back of his neck.

“Sounds kind of boring to me. Though it might be nice on another night. After watching that ass twitch and your breasts bounce, I want something a little different. Are you up to it?” Adrian leaned down and nipped her lips. Some bouncing and wiggling was definitely in order, but without the barrier of her red shirt.

“I’m definitely up for anything you’d like.” She scraped her nails over the back of his neck.

“Be careful what you court, little jewel. You might bite off more than you can handle.” Adrian pushed open the door to their bedroom.

“Why don’t you see what I’m up to, big guy? There are two of you, and since quiet is out, show me how much fun you can make it.” She tugged on his hair.

A sting shot through his scalp. Taunting woman. Definitely time to give her something to think about. “Now, let’s get you undressed.”

He set her on her feet. She reached for the hem of her shirt. He grabbed her hands and shook his head.

“We’ll undress you.” Adrian released her hands and tugged up the bottom of her shirt. And he’d use the opportunity to touch and tease before he took her up on that offer to see what she could handle.

“I had to put the food up and make sure that the alarms were set. Cabel would kick my butt if I didn’t, especially with the people after you. We can’t take any chances.” Quinn walked into the room. “So what are the plans for tonight?”

“Well, our woman here says that she’s up for anything we’d like to do and that we should see what she can take. I was thinking that we might try out a little lubricant and some of the scarves.” Adrian pulled the shirt up over her head.

“Sounds like she’s definitely interested, and I think you have a great idea.” Quinn eased in behind her and spread his hand over her belly. “I love her smell. I could lick and taste her for hours. That tang of salt and coconut is delicious.”

“Why don’t you unbutton those jeans and we can get her out of them? I’ll get the lube while you do that.” Adrian eased back. First the pants and then they’d remove that pretty pink bra. He loved her matching underwear. It was always sexy as hell, and peeling her out of them was such fun.

“I can do that.” Quinn skimmed his other hand over her belly and down to her jeans.

Adrian smiled. She wriggled in Quinn’s arms and tried to put her hands under his. Quinn brushed her away and continued to trail his hands over the edge of her jeans. Adrian turned and strode over to the dresser. Watching might be fun, but it wouldn’t get them in bed with her any faster. He pulled out the lube as well as the scarves. When he turned around, Quinn had unbuttoned her jeans and slipped the zipper down.

“You’ll enjoy tonight so much.” Quinn nibbled on her neck as he slid his hand into her pants.

“I’m definitely enjoying this. I’d like it more if you’d slide your hand a little farther south.” She widened her stance.

“You mean like this?” Quinn pushed his hand into her jeans. “I love that you’re wet for us.”

She moaned and her hips rocked forward. Quinn was definitely doing more than cupping her. She leaned back against him. Adrian took a slow breath. She was so beautiful and sexy when the heat took her.

“Uh-uh, sweet jewel, you can’t rock yourself to pleasure there. If you come, it will be on our lips or our cocks.” Adrian stepped forward and tossed the scarves and lube onto the bed.

He gripped her jeans and drew them down her thighs. The clothing bunched at her calves, stopped by the tennis shoes. Damn, her shoes. He knelt and lifted one of her feet and pulled off that shoe and then the other.

She wriggled. “Then maybe you two should stop teasing and get me out of these clothes.”

“Teasing you is such fun though.” Quinn cupped his hand over panty-clad mound.

“Now, we can touch and taste as we’d like. Before you get on that bed, we’ll skim you out of these pretty things.” Adrian stopped in front of her.

He trailed his fingers up her stomach and over the silky fabric molded to her breasts. He traced the lace trim at the edge of the cup. The silky covering glided beneath his fingers. It would be fun to suck her through that. Her frustration would grow at the blunted sensations, but he wouldn’t last long before he’d crave the contact with her skin. 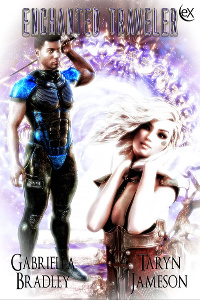