The Death of Digby Catch (MM)

It’s more than eighteen years since August Catch’s Uncle Digby disappeared to the Cape to mourn the death of his sister. So when August arrives at Arachne’s Loom to collect his late uncle’s things, he isn’t expecting to find stories of a man larger than life. Or the very real possibility that Digby’s death may not have been from natural causes.

Theo Webb has had few people in his life he loved, and fewer still he can trust. But the estate groundskeeper, Digby Catch, was one of them. Returning home for Digby’s funeral, Theo is thrown together with Digby’s nephew, and the attraction is instant. But so is Theo’s certainty that things surrounding Digby’s death don’t add up, and at least one person isn’t telling the truth.

Discovering a killer is difficult when someone is desperate to keep more than just their identity a secret. And when all the clues point in one direction, even Theo isn’t sure what to think. He and August must work together if they’re going to solve a murder, and not let the thing growing between them be a distraction.

But then, maybe a distraction is exactly what they need. 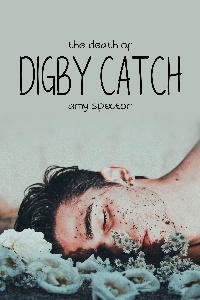 The Death of Digby Catch (MM)

August had known he wasn’t alone in the woods. He’d been listening to the sound of Theo’s cursing and watching the bouncing of his flashlight for a solid five minutes. Still, the sight of him frozen, unmoving just beyond the trees was unsettling.

When he got closer and realized what Theo was looking at, he didn't feel any better.

“Jesus Christ.” Theo yelped, whipping around at the sound of his voice and only just catching himself from shoving him hard in the chest. “Don’t sneak up on me like that.”

August opened his mouth to say he hadn’t, but his eyes were drawn to the movement of the figure in the window, and instead he grabbed Theo and tugged him back into the line of the trees.

“Good.” Theo pulled out of his grip and started marching back towards the cottage. “I have a few fucking questions to ask.”

“We don’t even know who it is.” August ran to catch up. “For all we know they have a gun.”

“This isn’t Law and Order, August.” Theo didn’t slow down.

“It’s not Blue’s Clues, either.” But August was still right next to him, keeping pace when they hit the porch. “Just promise me you’ll let me handle it if it turns into a fight?”

“It would be more helpful if you can throw one.” Theo scowled but August was not going to back down. “Let me handle it.”

Theo let out a huff of breath and tried the knob, and when it didn’t open, held out his hand. “Got the key?”

August dropped the ring into his palm.

Theo unlocked the door and flipped on the living room light and August ran for the stairs. "You stay down here."

He found the bedrooms on the second floor empty. The bathroom too. He checked the closets, and under the beds, and besides the same level of clutter that had overwhelmed him downstairs, there was little in the way of surprise outside of one of the bedrooms having been set up as a studio, with an easel and painted canvases propped against the walls.

Like his vast taste in books, it was something else August had not realized about his uncle.

Downstairs he found Theo checking the back deck.

“Goddammit." Theo turned around and leaned back against the railing. "I've checked down here. I'm surprised they were able to get away without at least one of us getting a glimpse of them."

"Shit." Theo bolted past him and headed to a short hall at the side of the kitchen. "Here, and there's an outside cellar door too. Since both the front and back doors were locked, it's probably the way they got in. Careful not to bump your head."

They took the narrow cellar steps single file, one in front of the other. And at the bottom, Theo pulled a chain dangling from the low ceiling, and a dim light came on. It did little more than illuminate the hard pack dirt floor beneath it and darken the shadows in every corner.

The ceiling was only an inch or two above Theo's head, and as they moved around the clutter of rickety-looking metal shelves full of dust and cobweb-covered mason jars and crates of old, rusted tools, August had to bend down so he didn't crack his skull.

“The outside cellar door should be ... dammit. It’s bolted.”

The door at the top of the stairs slammed, and August turned so fast he banged his head on one of the floor joists. “Fuck.”

Theo ran for the stairs, bumping into August, and toppling over one of the shelves that crashed to the ground in a cacophony of pounding feet, screeching metal, and shattering glass.

"Let me try." August took the steps, squeezing past Theo, grabbed the knob, and rattled the door. "Is it a problem if --"

“Please. Break the fucking thing down.”

It only took one firm slam of his shoulder for the wood of the jam to splinter, but no amount of pushing could open the door. “Something’s blocking it.”

They both fell silent and listened to the slow retreating footsteps and the eventual slam of the front door.

“Well.” August reach out to pull free a cobweb that had gotten tangled in Theo’s hair. “Now what?”

“Tell me you have a phone? I left mine at the cottage.”

He fished it out of his pocket, unlocked it with his thumb, and handed it over. "Calling the police?"

“Absolutely not.” Theo stared down at the screen a moment before dialing. "Simon. Hey, yeah it's me. I have a huge favor to ask."