The Future in Our Stars (FF)

The Future in Our Stars is a trio of stories that explore the idea of romantic relationships between humans and artificially created lifeforms.

Follow the narrator as she discovers her repair mission for an AI asteroid miner is actually a ploy to borrow her body for a romantic encounter.

Spend the holiday with Sally, an artificially created human and her naturally born lover.

Then take a trip into orbit to learn how it all ties together with a mysterious deep salvage find. 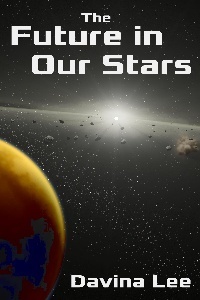 The Future in Our Stars (FF)

"All secure, sis," Kaleisha announced. "Gonna open up the can now. See what inside."

Kaleisha switched her laser tool from a low-power etch setting to high-power to cut, and concentrated her efforts on the recessed hinges of the rectangular, black slab's hatch. After a few minutes, Kaleisha held tightly to the docking clamps on either side, and with a grunt, gave the hatch a swift kick. The hatch fell noiselessly inward.

"I in, no problem," Kaleisha said.

"We don't know nothin' 'bout this thing or what inside."

Kaleisha glued a small transceiver to the outside of the slab just above where she had inscribed the salvage tag earlier. She pulled out a length of wire and glued the end to the inside wall of the derelict craft as she boarded. Angie trained the ship's laser link on the transceiver, while Kaleisha switched her suit's radio to RF.

Kaleisha laughed, and turned on her suit's helmet camera and lights.

"You seein' what I seein', sis? Ain't nothin' here but a long shaft. Long shaft wit' a ladder." Kaleisha blew out a sigh that came through the radio link as mostly static. "Good thing she not spinnin' fast. Long way for climbin' under Gs."

Angie watched from the cockpit monitor as Kaleisha made her way, hand over hand, along twenty rungs of the shaft's ladder.

"Lookin' like a maintenance hatch up 'head," Kaleisha said. She locked her feet against the ladder rungs, placed both hands on the hatch wheel, and grunted.

Angie watched the monitor as Kaleisha adjusted her laser cutter and went to work. The resulting smoke, having nowhere to go, simply curled around inside the tunnel, making Angie's view on the monitor tenuous at best.

Angie flipped a switch on the console to mute the voice of Barry Manilow for a moment and then closed her eyes. "Jah guide, Babylon lady," she said. "Jah love."