Chad and Brick have it all -- a fairy tale beginning and, against all odds, a great life and each other. But what they fear most is starting to happen. With Brick's genetic disorder becoming more progressive, Chad and Brick uproot their lives to start fresh, to live only for each other.

What they don't count on is the sexy pizza delivery boy who is soon delivering more than pizza in their lives.

"The pizza got delivered."

"What do you mean you ordered him?"

"Yes, babe. It's what we talked about, right? Opening ourselves up, opening our lives up to opportunities. To explore different things while things --"

"You said you would stop talking fatalistic stuff."

"Yeah, but ordering a hooker, well, I don't know."

"It's actually safer than going to a bar, you and me, picking up someone. Plus, it's legal in Nevada. Outside Vegas' city limits' anyway."

"Trust me," Brick whispered. "Just go with the flow for once. I know it's tough for your accountant brain to switch off, but just go with it."

"It's not cheating. If anything, we're doing this together. We said we would try things to make sure our marriage survived this disease."

"I know," Chad said, his voice faltering, as the delivery guy started striping off his clothes. "But talking about it and looking and doing something about it, that's two different things."

"I know, but I made the temptation extra sweet for you. So, tell me, does he look like me?" Brick asked.

"Probably more buff. I can see that."

"Check out where he placed his phone," Brick said.

Chad scanned the area and saw a phone, propped up facing the pizza dude. "Are you watching this?"

"I was stuck in traffic, but once I realized with the traffic it'll take me a while to get there, I pulled over. I logged on my iPad to the secured website link he sent me. I can see the pool. I can see he's down to his boxer shorts."

Chad glanced up. The pizza guy was now standing there, staring back at Chad, smiling as if he knew both Brick and Chad were already mesmerized by him.

"He's looking at you I guess, wondering if you and I are talking. I don't have the audio clicked on my iPad yet. His name's Tyler by the way. But I don't think that's his real name."

Chad stepped outside, his cell still pressed to his ear.

"Your husband said it was okay to take a dip in the pool, but I forgot my trunks," Tyler said.

"Tyler, I think there's been some misunderstanding."

"So you know my name?" Tyler smiled. "That's good. I think we're on the same page. All of us," Tyler glanced back at his phone and smiled at the phone too. 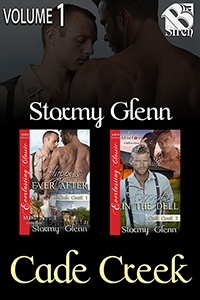