They Called Him Nightmare

They called him Nightmare, but Alec Vasilios, a wealthy and powerful businessman, wants to call Kai his own.

Kai’s past has left him with little trust in others and even more reluctance to surrender himself to Alec’s power. With both men harboring supernatural secrets, finding common ground won’t come without sacrifice. 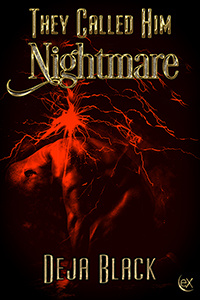 They Called Him Nightmare

He was pitch black, darker than the darkest night. Tall and solid, with a tapered waist, he had a body he often clothed in somber shades of ebony. And so they called him Nightmare.

To others he was scary, inspiring more fear than creatures that traveled in the moonlight, beings on two and sometimes four legs, with wings and without. But that’s what they saw. They saw a guy who walked the streets at night. They saw a guy they knew in high school, someone who frightened them because of their own self-perceptions. They never spoke to him, never learned what his dreams were, what his fears were. Because he had them. Fears. He tried to be quiet, to be silent, to be unhurried in his dealings with the people who tiptoed around him, but it only made it worse. Located in the Carolinas, in a small town with only one Walmart, a mall on its way to a graveyard where people walked rather than shopped, and a rose festival they had once a year, the same ones he hid from in the daylight hid from him in the dark.

They never asked him his name. They ran from his shadow. He was alone. Always alone. He was Nightmare.

To me he was everything I wanted. To me, he was beautiful. I needed to run my fingers along his skin, to cherish him. In the heat of the blazing sun, I wanted to taste his sweat. I wanted him beneath me, a part of me, a part of my soul. He didn’t frighten me. He entranced me. He called to me.

Me? I was everyone’s dream—kind to the elderly, a young gentleman, the perfect kid, the boy every parent wanted their son to have as a best friend. I said the right words, did the right things. I was the golden boy of the community, the future Mr. Right for their darling princesses.

And I was tired. Tired of trying to be all of those things when what I really craved was to drink their little darlings dry and use them for the rich blood source I so deserved. Hidden among humans, I walked among two-legged hearty meals filled with spicy flavors and sparkling with energy. Seeing muscle-bound gods run up and down basketball courts, the scent of their heated plasma a tantalizing aroma for me, made me ache and twist, burn to release my canines from their imprisonment and sink them into veins that begged me to partake. But no. I was warned as a child to stay away, to resist. So instead of the great, gulping drinks I desired, I made do with small sips, savored the tidbits of flavor I was able to ingest while on dates with their females. They would sigh and whimper, pleading for me to take them, to glean what I needed.

I never needed them. I never wanted them. I wanted more.

There were times when I came close to having more, to having what my heart craved—times when I met a friend or two, invited them to hang out at night. Those boys trying so hard to be men, the ones who were gods on the basketball court, the football field, and track, whose blood called to me the greatest? They were the ones who were so easily swayed. A spell whispered against an ear and they would follow me anywhere.

On grass wet with evening dew, shrieks of passion loud to the heavens, I took them. My dick speared into their holes, their necks pulled back, straining in the clutch of my fingers, I fucked them. My fangs dropped in anticipation, and when they orgasmed, I struck, drinking full and greedily from those gods. I rejoiced in their energy, rode their asses while I fed. I gave them back to their families, eyes glazed, and memories clouded with thoughts of a movie or an evening spent at the local skating rink. Later, when they raced by me only to stop suddenly and turn, their haunted eyes would take me in and wonder. They would shiver, and I would smile knowingly.

Needed? I needed for the beating of their hearts to plummet while I fed from the banquet of their life source. I needed to plunge my dick into the vessel of their bodies, drive my canines into their carotid artery, and feed in the nourishing pool of their blood to satisfy my burning hunger. I needed to live, and I would never be able to do that in a small town where a whisper could be heard for miles. So their little darlings were safe. I would only take enough to satisfy the hunger, but never enough to be sated.

But one day I saw him, the boy they called Nightmare, and I wanted him. I didn’t want to just drink him—I wanted to own him, bleed him, keep him. I watched him as he kept to the shadows, too afraid of what the world thought, to walk in the light. His eyes were lowered, his head bowed. There was something about him that called to me, promised the hunger that wracked my body would be satisfied if I were to have him as my own. He was prey to my predator. No longer interested in little sips and the occasional feeding, my heart would race when I felt him near. I wanted those eyes to shine for me, dance for me as my spirit danced for him. 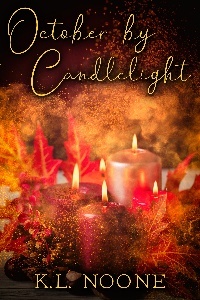 October by Candlelight (MM)
K.L. Noone
In Shelf
$1.99
Tweets by
sirenbookstrand