A series of murders and attempted murders gets the summer off to a dangerous start as Sean finally has a little time off from teaching to help Decrypter Dane investigate what's going on in Bleu Falls. The town's magic is being manipulated, and not only is Dane's Order of Decrypters leaving him out of the loop, he's being assigned to play bodyguard for the owner of a local smoothie shop, who might also be a Bigfoot. While Sean and Dane attempt to balance their relationship and their obligations to their paranormal organizations, the attacks escalate.

As the pieces start clicking into place, what becomes obvious is that there's an awful lot of raw magical power concentrating in Bleu Falls. Enough that whoever controls it could completely change not just the town, but the whole world. And the closer Sean and Dane get to the bottom of things, the less likely it seems they will ever have a chance at a future together -- unless they can tip the scales in favor of a happy ending.

“So you’re the lady with the monster problem,” said Big Frank after introductions.

Winter raised an eyebrow at him. Dane figured she rarely had people referring to her as a lady due to the goth way she dressed.

“I think I got what you need. This way.”

“How big is the land?” asked Winter. She pelted Big Frank with a series of questions -- did his property see deer and how many, where was the nearest water -- and considered each response.

“Huh. They’re getting along,” said Sean, falling back to Dane’s side.

“Like you had a better idea,” said Dane. He scanned the trees as they followed Big Frank off the gravel and worn down grass. “These trees feel safe to you?”

Dane was uneasy anyway. When they got where they were going, which turned out to be an old pole barn, he pushed ahead. No way in hell he was letting Big Frank walk through that door first, even if it was so overgrown with weeds it looked like he hadn’t set foot in it in years. He pulled his gun, circled it, and went up to the door.

He practically had to shoulder it in. The place smelled like stale dirt, and dust circled his head in the gust of air from the door. Dane blinked in the dim light, and then a hand slid in and flicked the light switch.

“Just stay out here,” said Dane, shooting him a hard look. He wound through the place, piles of old crap and boxes stacked along the sides, but there was nothing more dangerous here than mouse droppings. When he gave the all clear Big Frank moved forward to pull open the garage door.

“Not sure how big a hodag is, but I hope this will make a good den. It’s back a way, lots of space, and the creek is down that way.” Big Frank nodded to his left.

“I think it should fit them,” said Winter. She entered and wandered through the space. “Do you mind if I move anything?”

Sean followed her inside and Dane didn’t want to be the only one out so he went in too.

“No problem,” said Big Frank. He moved to a particularly large stack of boxes covered by a tarp and ripped the plastic off. “I’ll help you make space in the middle. Sure is exciting, having a hodag and pups stay.”

“He doesn’t like men, so don’t get close,” said Winter. She began moving boxes one by one.

Sean nudged Dane and they moved to help, Big Frank chatting excitedly as they worked.

“Not to worry, I can observe from afar. What about the little ones?”

“They need space too. Letting them do their own thing and have their own space is the best.” She paused. “Oh, score. I feel like an archaeologist.”

They helped Winter pull back more boxes and turn up the edge on another tarp, revealing old bones, wiry feather-tipped hairs, and scales in a jumbled mess. Big Frank tugged it out to the middle of the concrete floor and they stared at the remains in confusion.

“Did you ever buy a dinosaur skeleton?” asked Sean.

Dane toed the nearest bone, which looked like a femur to him. The creature this belonged to was at least the size of an adult human, and he didn’t like what he was piecing together from it. Claws, scales, feathers. Tiny, slender bones like oversized bat wings. There was no skull, but there didn’t have to be for Dane to be worried.

Dane looked up at him. 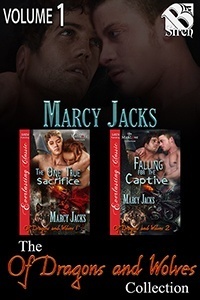 The Of Dragons and Wolves Collection, Volume 1 (MM)
Marcy Jacks
In Shelf
$3.99