Born to Fly: Landing in Love

Air Force pilot, Major Erich "Daredevil" Stark runs into a woman leaving a club and is immediately attracted to her. He wants to know her better but after a brief and intense interaction she slips away. When they meet again, he longs to start over.

Bliss Esparza has spent her life doing two things. Dancing and raising her younger brother, When she meets the handsome pilot she knows he’s something special.

Erich knows she's the one for him. But one night he finds himself tossed out of her villa after offering to help her brother with a recommendation letter for military school. Will he be able to convince her to give them another chance? 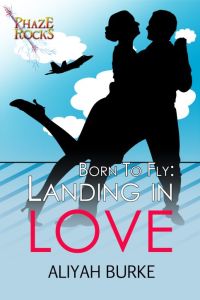 Born to Fly: Landing in Love

Major Erich Stark swore under his breath as a woman shot out from the back of Atlantis and damn near ran over him. As it was, she hit him dead on and he grabbed her arm to not only steady her but also keep her from falling to the ground.

“Easy there,” he drawled.

Her head jerked up and he found himself gazing into a pair of dark brown eyes framed by thick black lashes. Smooth mocha skin covered her lithe body. She had a heart shaped face with a flatter, cute button nose. Full, tempting lips were parted in shock and surprise.

“Con permiso,” she mumbled in a raspy alto voice and stepped out of his hold.

Erich’s gaze skimmed her and he couldn’t stop the flare of desire. She wore a pair of white cotton pants, which sat low on her hips and a gold cutoff shirt that exposed her flat, defined abdominals and the shapely tuck of her waist. Damn! She’s in awesome shape. Still, none of it took away from her femininity. “No problem,” he said, not minding at all how she felt in his arms. “You new here? I don’t ever remember seeing you dance here before.”

Her arched brows snapped together and her chin lifted in haughty arrogance. “Excuse me?” she snapped in English.

He pointed to the building she’d just vacated. “The Atlantis. You just came from the back, like employees do. So I’ll ask again, are you new here?”

Erich fought the urge to shuffle his feet as her gaze seared him. No woman since his mother had ever wielded the power to make him squirm. Until now. She raked her gaze from the top of his head down to his boots and back up again.

“And I suppose you know all of the ladies that work there, don’t you?” she asked in a sharp tone.

Her condescension raised his hackles. “You have a problem with men going to these places and yet you’re coming out of one? How else do you earn money if you don’t have patrons?”

“I’m surprised you would recognize my face at all. I’m sure that’s not what you’re used to paying attention to.”

She’s mighty snippy. Not that it mattered to Erich. He liked his women with fire. The desire to needle her a bit more roared over him with the force of a gale. Dropping his gaze he stared at her open toed sandals and smiled at the metallic green polish on her toes. A gold chain with small bells circled her left ankle. And around her right one was a tattoo he longed to get a closer look at.

“Tonight your first night?” he queried. I’m coming back to see you dance, whoever you are.

“You know, not everyone who leaves an establishment like this…a gentleman’s club…works in one. Some women are capable of and actually enjoy making a living without gyrating around a pole, and having men leer at them.”

She pushed by him and Erich turned and watched her walk to a waiting convertible and jump in over the door. A low growl left him when he saw the handsome younger man at the wheel kiss her cheek and then drive them both away.

“Hey Erich.” The sound of a voice pulled his head back around. It belonged to Donovan “Livewire” Leegen, friend and pilot.

“Donovan, what’s up?” he asked his friend.

“You know Bliss?” his friend asked, peering past him in the direction the car had left.

“Bliss?” Erich’s body hardened as the vixen’s image popped back into his mind. Bliss. That is a damn good name for her. What’s Donovan doing here?

“Yes, Bliss. The dancer.” Donovan frowned at him. “Dude, you were just talking to her. Hot as all get-out. A body made for—”

Narrowing his eyes at his friend, Erich ground out in a tone laced with death, “If you value your life, Captain Leegen, you’ll refrain from completing that sentence.”

His fists were clenched at his sides and he longed to smash one into Donovan. Hell, why not both? It didn’t make sense, but he wanted nothing more than to stop the phrase coming from the other man’s mouth. Preferably with a violent manner. Bliss, if that was her name, was his.

Donovan arched a blond brow at him and crossed his arms. “What does it matter to you what I say about her?”

The second she walked into my arms. Setting his jaw, Erich lifted a brow of his own and stared at Donovan. He wasn’t backing down from this. Granted he hadn’t known her for longer than about two minutes, and that hadn’t even included a formal introduction. But it didn’t matter.

“Deadly.” Erich didn’t even flinch at the use of his call name.

That bit of news didn’t sit as well with him as he’d hoped. There were other strip clubs around and he didn’t want to have to go through and find her. But, if that’s what it took, he would. “I have to go. See you, Donovan.”

Donovan smiled. “Yes, I’ll see you around. Hey, Daredevil, about what I said, I didn’t mean anything by it, just that she’s hot, ya know?”

“Then you don’t need to be looking around anyway.”

“You will be if you insist on looking at my woman.”

“Did you even know her name before I told you?”

“What I knew or didn’t know ain’t none of your business.” He licked his lips. “I will find out everything about her.”

“Since when are you so possessive over a woman?”

They walked toward his car. Once there, Erich leaned on the hood and hooked his ankles as he stared at his friend. “When did you know about Carissa?”

A purely masculine smile filled Donovan’s face. “The second I laid eyes on her.” Erich merely lifted an eyebrow and waited. Donovan murmured and nodded. “Okay, I get it. Not anything you can explain. You just know.”

“Exactly.” Erich pushed off the hood and scanned the darkening sky. “I’ll catch you around, Donovan.”

Erich merely waved, not entirely sure Donovan wasn’t being totally sarcastic in his well-wishing. He paused with his hand on the handle of his door. “Bliss,” he muttered. “Well, not much to go on, but it’s more than I had.”

A fleeting thought that Bliss may just be her working name crossed his mind. Sliding across the leather seat of his T-Top Monterey maroon Chevrolet Camaro, Erich started the powerful engine and pulled out of Atlantis’ parking lot. Erich drummed his fingers on the steering wheel and, with a sigh, headed back for the base. Tomorrow he would begin his search for his woman. He had a flight to get ready for.

After a smooth flight Erich headed back across the base toward his room when he heard his name being called. Stopping, he waited for his friend to catch up. “What’s up, Tom?” he asked.

“I need a favor,” the man said, a desperate gleam in his eyes.