A touch on the back of her hand startled her, and she turned her head. Zoen had somehow moved closer without her hearing him.

“You are not alone right now,” he murmured, sending shivers down her spine. The Xyran had no right to sound so sexy, not when his kin, her lover lay just beyond.

“No,” she said, unsure if she was agreeing with him or denying him the unspoken attraction she was sure he also felt.

“Do not say no.” Zoen lifted her hand and, shockingly, kissed her fingers.

Her eyes flew to Jaxt. He watched them calmly. No, not calmly, she realized as Zoen kissed her wrist. His forked tongue flicked out, lightly tasting her skin. No, he’s not calm. He’s aroused. Jaxt’s eyes glittered in the firelight. Sky sucked in air, feeling lightheaded. This wasn’t a situation she’d ever contemplated being in. Should she say yes to Zoen? Was Jaxt really sanguine about this?

“Jaxt,” she began, but had to clear her throat before she could continue. “Are you serious?” She couldn’t reconcile the possessive, demanding lover of this morning with the kind of male who could share a woman, no matter how close he was to the other Xyran.

“Zoen is my blood-sworn kin. He and I are of the same body,” he replied.

She wrinkled her forehead. “I think I’m missing something.”

“No, you are not,” Zoen murmured, biting her wrist.

She gasped. When he bit down harder, she began to tremble. His golden eyes gleamed at her as he held her arm in his mouth. When Jaxt got up and took off his shirt, she stared. She still couldn’t quite believe he was entirely healed, but there was no disguising his virility. He stalked over and dropped to his knees.

“I am going to hold you down while he takes you,” Jaxt said, hands going to her hair.

“What makes you think I’m going to agree to that?” Sky fought down a full-body shudder. He had his fist tightened against her scalp to just the right pressure. She wanted to go limp and let them do whatever they wanted with her, but she refused to submit without respect.

He growled and tightened his hand, just enough to bring tears to her eyes. “You want him. I can see it in your eyes.”

Involuntarily, Sky flicked a glance at Zoen. He’d released her arm while Jaxt spoke, but now he bit her again, this time at the base of her thumb. She moaned under her breath. “So what if I do? I don’t have sex with every male I see.”

Jaxt leaned down and kissed her neck. “Do you trust me?”

She went still. Did she? She wasn’t sure. Did she want him? Yes. The absurdity of a Xyran male asking her if she trusted him made her question her sanity. Xyrans were hostile and violent. Everyone knew that. They stole human women for slaves. Except these two particular Xyrans weren’t like that, were they? Wrong, her brain told her, flashing the image of Jaxt beating the enemy soldier against the cave wall into her thoughts.

“You think too much,” Jaxt growled, loosening his fist.

“I trust you,” she gasped quickly. Screw it. If I’m going to do something stupid, like have sex with two Xyrans at once, I may as well do it with a bang.

“Good,” he said, hauling her up by the arms. Sky struggled for a moment, then relaxed when she realized he wasn’t hurting her.

Not hurting me much, she rethought breathlessly.

Zoen quickly undid her belt and tugged her pants down, flinging them away.

“Careful with those. I don’t want them to catch fire,” Sky said, needing to assert some kind of control.

Zoen bared his teeth at her, making her gut clench. “Quiet.”

She gulped, and he stripped off her vest. She hadn’t worn anything underneath it today, because the heat had been so oppressive. His gaze told her he liked what he saw, but instead of undressing, he slowly drew one of his golden knives.

“You are going to enjoy this,” Jaxt rumbled. His cock shoved up against her bare ass, and she wiggled just a little. “Settle down,” he said.

“What are you going to do with that?” she asked, going still.

Anger rolled through her, and she flexed her arms. She couldn’t move at all, dammit.

“She does not like when someone shushes her,” Jaxt said, controlling her movements.

Instead of speaking, Zoen flicked his arm out so fast she could barely track its movement. Sky gasped and looked down. A tiny drop of blood welled up on the curve of her bare breast. The sting was so slight, she might have imagined it if not for the blood. “Dear God,” she murmured, absurdly aroused. Her pussy went hot. 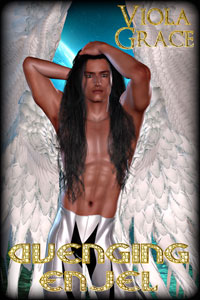