Lieutenant Star Hawking, a young diplomat on her first assignment, doesn't feel very confident in leading the mission she's drawn, but she knows what she has to do. Pressed for time for more than a year, her career has taken precedence over her personal life. Then from out of nowhere, two males enter her world.

Major Jake "Spence" Spencer has been a Marine for a long time, and he's played the field. A lot. One day, he notices that his feelings for a woman have changed, and it puzzles him. He finds this woman eclipses all others he's known, but exactly why eludes him.

Krell, an alien diplomat, has much to hide about the society on his planet and the plans the Council of Elders has for Daedalus and her crew. The survival of Krell's people depends on stealth and deceit. But when Krell falls for a human woman, he discovers all may not be as it seems on his world.

5 ROSES: "This is an unusual menage story. It is very tastefully done for those who may find that kind of thing distasteful. I enjoyed the by play between characters as well as their growth as individuals. The scenes are dramatic and colorful, and more than enough to keep the reader's attention. For those who like a little spice to their romance or even those who are more conservative, this is a book you have to read! It is the perfect blend of science fiction and paranormal romance, and I for one am definitely going to continue to follow the crew of the HMSS Daedalus through their adventures! I recommend that you do too!" -- Coale, My Book Cravings

5 CUPS: "Burning Love is my favorite kind of science fiction and paranormal romance! This is a fast-paced love story full of suspense, action and best of all, true love. I loved how each character has their own flaws and how they work to overcome them. This particular love triangle is handled with great taste. Even if you are not one to read a sexual multiple partner story you will still find lots to love about this book. To top it all off the world building is spectacular. I will be avidly purchasing the other books in this universe and highly recommend Ms. Aaron to anyone who loves to read romance!" -- Regina, Coffee Time Romance

5 ANGELS: "I found it rather ingenious that the author named the ship Daedalus. For this tale abounds with a labyrinthine plot, adroit characterization, and skilled world building. While the tale was slow to build in the beginning it rapidly built to a resounding crescendo. The mnage between Star, Krell, and Spence was skillfully handled. There were a few mild sensual scenes but nothing too spicy. The main focus of Burning Love is the struggles that Star, Krell, and Spence face, not only in trying to carry out their mission but also in coming to terms with the triangle that they have become. None of the characters are perfect but with all three together their flaws are balanced by their strengths and the result is lovely to behold. If you like science fiction with hot aliens then Burning Love is for you." -- Hayley, Fallen Angel Reviews

More From Flights of Fancy

The fact was that she was in love with two men. She knew all about the multiple marriages all through the empire, but she never saw herself involved with more than one person. The idea seemed like something distant, something for the royal family and aristocrats of the empire, not for an average girl like her.

The front of her mind told her the feelings she harbored for Spence and Krell weren't fair to either man, but the back of her mind wanted them both. She wanted to be greedy. That made guilt well up in her when she faced the desires.

Spence suddenly stopped, and she ran into his chest as he turned to face her.

He laughed. "Sorry about that. You know, we need to talk. Maybe."

His arms slipped around her, and he pulled her close, pressing his lips to hers. She felt so right in his arms, she couldn't resist hugging him tight against her as his tongue flickered between her lips.

She'd been careful to avoid being too attentive to Spence in Krell's presence, and vice versa, remembering the conflict between the two men in the cell of the Rangor, but she couldn't seem to stop herself. Spence felt so good against her now, and she wanted him. From the growing pressure of his swelling cock against her, he must feel the same, and yet the thought of Krell standing somewhere in the room kept playing through her mind.

She discovered where Krell was when he moved up behind her, sandwiching her between him and Spence. His hands moved over her back and up the sides of her head. She felt Krell's fingers touch her forehead, and the familiar calmness came upon her as things gained a new perspective and order in the universe.

Spence pulled his lips from hers, and she opened her eyes. As he kissed down her neck, she saw that while Krell's left hand was on her head, his right fingers touched Spence in the same manner. She knew Krell was giving them both the same gift of peace.

Even when Krell pulled his hands away, the sense of tranquility remained, and she felt four hands moving over her body and removing her clothes. Spence slipped the zipper of her jumpsuit down, his rough hands gently massaging her skin as he went. She felt Krell's long fingers pushing the material from her shoulders, gathering it at her waist, as he kissed her shoulders.

Spence slowly slipped from her embrace and knelt before her, pulling the jumpsuit down to her ankles and helping her step out of the cloud of material. He kissed her thighs as Krell placed his fingers on her forehead again, turning her head to the side where his lips met hers.

Through the intense waves of desire, she felt Spence lift her leg until she stood on one foot with the other draped over his shoulder. His tongue traced her thigh and teased across her clit, causing her to jerk with pleasure. At the same time, Krell reached down and placed his free hand on Spence's head.

As Krell's tongue played in her mouth and Spence's darted into her pussy, Star sensed her orgasm closing on her. Krell pulled his lips from hers and whispered in her ear. "Relax, Star. There is no hurry."

She knew he was right. In the cool light of the calmness he brought to her, she knew all was well with the universe. She only need to relax and love the men who loved her.

The Best of Both Worlds
Carolina Barbour
In Shelf
$1.50 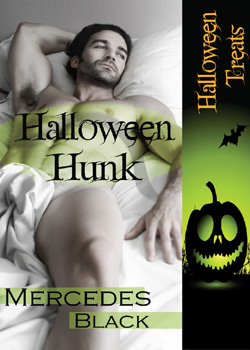 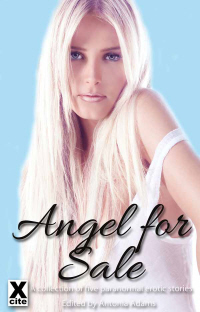