He stumbles right into love without even realizing it…

When clumsy cowboy Reid Holland is approached by a naked man, he damn near breaks his own neck falling off a ladder. Instantly smitten, Reid assumes the man must be for another. No way would he luck out and get such a stunning partner. But when the man turns out to be his mate, he’s convinced there’s been a mistake.

Disoriented yet irresistibly drawn to Reid, stylist and party planner Finn Kirkpatrick struggles to remember what he’s doing in Utah, but one thing he’s not confused about is his attraction to the awkwardly shy cowboy. He is used to the finer things, but he also knows a good thing when he sees it, and Reid is just that. 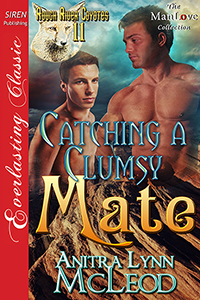 Heat Rating: Scorching
Word Count: 36,434
12 Ratings (4.3)
Shape-shifter Western/Cowboys Alternative (M/M, Gay)
In Bookshelf
In Cart
In Wish List
Available formats
PDF
Mobi
HTML
ePub
Cover Art by Les Byerley
Reviews
I keep getting these stories because I always wonder how the next mate will show up and for whom. I am really hooked on this series and I am a big fan of this author. Keep them coming. <3
animelover
Read more... 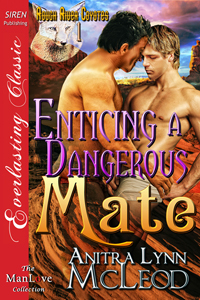 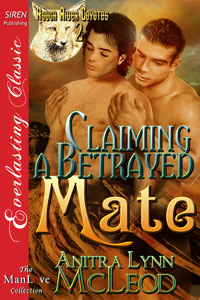 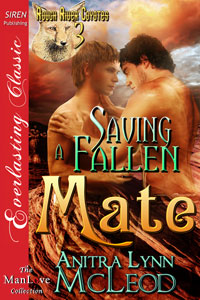 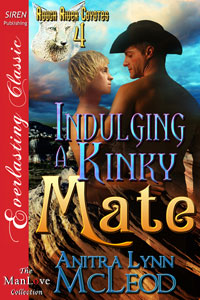 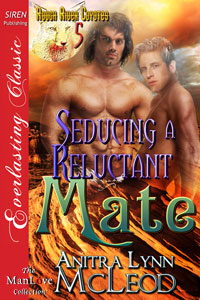 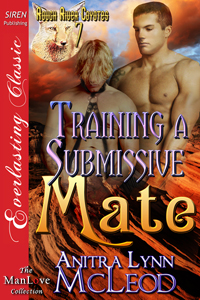 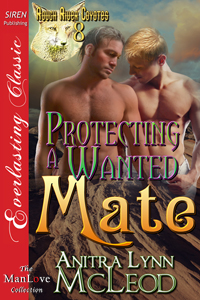 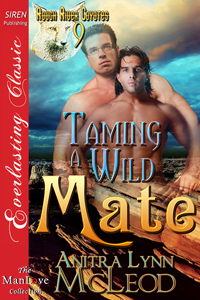 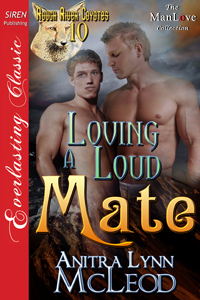 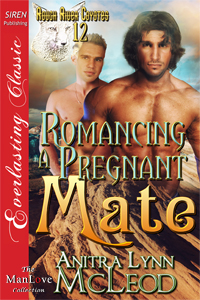 Romancing a Pregnant Mate (MM)
Anitra Lynn McLeod
In Shelf
$5.99
All Books In Cart
All Books In Bookshelf
Excerpt

Finn could only peer up at the massive cowboy. He was tall and broad, dressed in a blue chambray shirt, faded dungarees, a light tan hat, and matching gloves. Although, to be fair, he didn’t think the gloves were selected because they matched the hat. No. This was a working man who probably picked his wardrobe for functionality and not visual appeal. But then he noticed there was a kerchief around his neck. It was powder blue and matched the man’s eyes. The inappropriate erection he’d gotten when Reid bent down to retrieve his lunch was back and stronger than ever. What in the world was wrong with him? Yes, the man was handsome in a rough way, but he was most definitely not Finn’s type.

“How in the world did I end up out here?” Finn felt dazed. “The last thing I remember is driving.” That was strange in and of itself because he didn’t think he did a lot of driving in New York. He either walked or took taxicabs everywhere.

“Well, there’s a reason for everything. I can’t really explain it all here. Let’s get you up to the big house.”

“Big house?” Finn was mortified to realize that he was echoing everything this man said.

Finn felt utterly off center. All he could think about clearly was how rough this man’s shadow of a beard would feel against his face when they kissed. When? The word echoed in his head. He was not going to kiss this man. As soon as he told himself that, his cock only got harder and his attention only riveted more fully on the cowboy’s mouth. He was lightly sweaty and a little dusty from his work, but his lips were clean. They also were a little redder than usual, probably because of the juice. While he watched, Reid licked his lips, causing Finn to utter a hungry little cry.

Reid’s brows lifted, tilting his hat back a bit. Obviously, he’d heard the noise Finn had just made. In answer, he growled. It was a low, aggressive sound that somehow managed to wrap around Finn’s body. And then he was stepping forward, intent on kissing a man he didn’t know. Reid stood still, watching him, his powder-blue eyes displaying his excitement and a stunned kind of disbelief.

Breathless with anticipation, Finn placed his hands against Reid’s chest, stunned by the hardness of his muscles. He wasn’t a man who got his tan from a spray or his build from a gym. He was all real. And Finn was going to kiss him. Finn closed his eyes right as their lips came together.

There was no other word to describe the feeling that possessed him. What he had right here and right now was something so enchanting that he wasn’t allowed to come to this moment with full knowledge of himself. He would only ruin everything. Somehow, the fates had stripped him of his identity to show him what his life had been lacking.

Reid seemed to be holding himself deliberately still. He didn’t grasp Finn or open his mouth. He simply stood and allowed Finn to kiss him. When Finn pressed closer and parted his lips, Reid followed suit. Slipping his tongue into his mouth allowed Finn to taste the fruit juice that Reid had been drinking. It was sweet and oddly familiar, but he wasn’t prepared for how famished he suddenly felt. It wasn’t a hunger for food that gripped him, but a need for sex. He wanted to have this man right here in the middle of the fruit trees.

Urged onward by powerful primal drives, Finn moved closer to Reid, deepening their kiss. When he felt Reid’s cock against his belly, Finn slid his hand down to palm him. Right before he made contact, Reid’s cell phone clamored for attention.

Reid stumbled back so quickly he apparently tripped over his own feet. He fell backward, landing on his butt. Unfortunately, he hit the juice box. Bright red fluid gushed out and down the inside of his jeans.

Finn stood, stunned. He had an insane urge to laugh but didn’t want to hurt Reid’s feelings. All the while his phone was still blaring.

Clearly embarrassed, Reid fished the thing out of his pants. Rather than snarl in answer, he simply said, “Yeah?” Reid then listened to whoever was on the other end. He made a point of not looking at Finn. He also didn’t bother getting up. “Call Marshal. I have something I have to take care of.” He listened again, this time with his eyes closed. “Just get someone else, would you? I really can’t. I have someone with me.”

Whoever he was talking to started talking so loudly Reid pulled the phone away from his ear. He looked up at Finn, shook his head, and rolled his eyes. Without moving the speaker close to him, he drew the microphone close and said, “I have to go.” Reid turned the phone off and slipped it back into his pocket.

“You’re not having a very good day, are you?” Finn crouched down beside him.

Reid laughed. “It’s pretty normal so far. Well, except for that kiss. That’s not normal at all.”

“You expect me to believe that a naked man hasn’t come up to you in an orchard and kissed you so passionately you fell on your fanny?”

Reid blushed ever so slightly. He darted his powder-blue gaze up and shook his head. “No. That happens to me every day. But squashing my juice box so it looks like I had a horrible accident between my legs? That’s the surprise.”

Finn squirmed atop Reid’s cock, making him struggle to hold steady. Finn’s ass was small, tight, and he had a way of moving that was somehow like he had an extra joint in his hips. In a simultaneous wave, he moved up, down, and all around to the point Reid was pretty sure he was going to climax again without ever having gotten inside Finn. But maybe that was for the best. If he never penetrated him, Reid couldn’t start the bonding process, and Finn would still be free to find another.

“You make me crazy.”

“I do?” Reid hadn’t done anything, so he wasn’t certain how he’d managed to inflame Finn’s desire. Maybe whatever Cassidy said had caused him to feel sorry for him. “I’ll stop.”

“Is that so?” Finn laughed lightly. “I don’t think that’s going to make a damn bit of difference.”

Before Reid could answer, Finn’s lips were locked again with his. Finn was rocking his hips faster, harder, and so frantically Reid thought he was going to be unable to keep his hands up. More than anything, he wanted to grasp onto him, center him, and then thrust into his ass until he was buried to the hilt. He wanted to know what it would be like to claim another. But then again, the last thing he wanted to do was hurt anyone, especially not a man as stunning as Finn. So Reid kept his hands up. He stayed still. His body ached, his mind rebelled, and the animal inside snarled with demands, but the core of Reid was stronger.

“Do you want me?” Finn asked, his voice breathless and sweet against Reid’s lips.

“I do. I can’t think of anyone I’ve ever wanted more.” And then Finn was kissing him with ravenous hunger. He found lube somehow—Reid imagined that Cassidy had slipped him the bottle—and then he was slicking up Reid’s cock with his manicured hands. After a moment, he was centering him. Reid’s prick pressed against the snug ring of Finn’s ass. It was a timeless moment that allowed him to feel both his invading pressure and Finn’s surrender. And then he was sliding inside him.

A stream of shocked expletives came out of Reid’s mouth. He was a man who rarely swore, but suddenly he uttered so much that he would surely make a sailor blush. Reid simply didn’t know what else to do. He wanted to move but didn’t dare. Besides, Finn was doing fine on his own. When Reid opened his eyes and watched him, he discovered Finn’s eyes were closed, his head was back, and he seemed utterly blissed out.

For the first time in his life, Reid felt whole. This was right. Even though he’d been afraid for Finn’s safety, there was no denying that they fit beautifully together. In the moment, he didn’t feel his usual crushing anxiety. Carefully, he lowered his hands and cupped Finn’s hips. His skin was soft and yielding to Reid’s touch. When he gently lifted and lowered him, Finn’s eyes came open, he peered down, and he smiled.

Working together, they quickly reached the tipping point, but rather than tumble effortlessly over as they had in the orchard, they each struggled to make the moment last. Reid didn’t want his first time to be over too quickly, but also, he wanted to make sure the act was good for Finn. His pleasure mattered a great deal to him. Far more than his own did. But hanging on became ever more difficult. Finn was able to lift and lower himself while simultaneously tightening his channel around Reid’s cock. That, coupled with the visual of watching him in obvious enjoyment, conspired to push Reid right over the edge.

“Don’t try.” Finn lowered his bottom all the way then pressed his chest against Reid’s. He kissed him sweetly, using a lot of tongue while he uttered breathless cries. 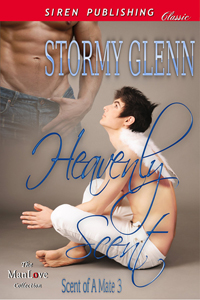