The truth won’t set him free…   Cassidy Williams was known for his great cooking and his unshakable honesty. But when he discovers Storm Hoffman asleep in the garden, he’s possessed by a fierce need to put an end to his loneliness. Against his better judgment, he lies and claims Storm is his mate. Since Storm has been drenched by an angry skunk, Cassidy knows he has a few days before Storm’s true alpha can pick up on his pheromones.   Professional hockey player Storm is hiding plenty of his own secrets, and running from a past that could get his new friends killed. Despite everything against them, Storm begins to fall for the gentle cook who sees beyond the hostility that has become Storm’s trademark on the ice.    But when their need for one another shatters their restraint, they will have to fight both inner and outer demons if they want to stay together. Can Cassidy make his lie the truth? Or will he have to surrender his mate to another? 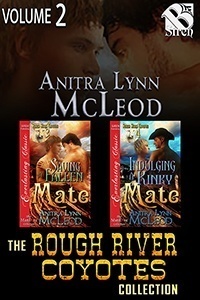 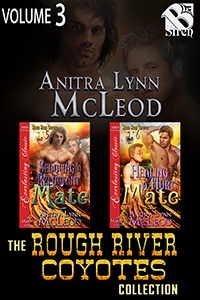 Romancing a Pregnant Mate (MM)
Anitra Lynn McLeod
In Shelf
$3.99
All Books In Cart
All Books In Bookshelf
Excerpt

Cassidy Williams had never smelled a worse smell in his life. It was one of those scents that would cling to him for the rest of the week no matter how many times he washed his curly brown hair. Holding his breath, he peered into the garden trying to locate the skunk. If it was still there, he’d come back later. What he found instead made him gasp and cover his mouth with his hand. A beautiful man with gray hair was sleeping curled up in the clover. He was naked but tucked around himself almost as if he couldn’t escape his modesty even in slumber.

Sighing, Cassidy checked around the rest of the garden, but he didn’t see any black-and-white, long-tailed kitties, so he opened the gate and stepped inside. The closer he came to the stranger, the stronger the aroma of skunk. Cassidy realized the poor man had likely been sprayed. That was no way to be welcomed onto the Rough River Ranch. If it happened during twilight last night, he might have tried to get to the farmhouse, gotten confused, and passed out in the garden.

Cassidy dreaded waking him but would nonetheless. Another naked man turning up on the ranch meant some lucky cowboy was about to gain a mate. With a sigh, Cassidy tried not to be envious. He knew his mate would come, but waiting and watching everyone else was getting ever more difficult. As the chief cook and bottle washer, Cassidy saw almost everyone on the ranch several times a day. They gathered at the long wooden table in his kitchen to eat. Since there were so many men now, they had to do this in shifts. Watching the alpha ranch hands play footsie with their beta mates had sparked such a craving in Cassidy he was almost creating more baked goods than the men of the ranch could handle. But cooking was the only thing that helped him focus on something other than his lonesome self. When he baked pies, cakes, and cream-filled cookies, he found release from his longings for love. Sweets for the sweethearts somehow soothed his sad heart.

In his own unique way, Cassidy loved every man on the ranch. By feeding them the very best foods he kept them healthy and hearty. The confections were just a bonus. Every time he set down a tray of goodies, the smiles of the men warmed his soul. He knew they would work off the excess calories with their physically demanding jobs, whereas Cassidy simply loved to make the creations but didn’t care to eat them. Sugar wasn’t his downfall. Coffee was. And perhaps potatoes, but his craving for them might be a holdover from his Irish and Scottish roots.

Still, since he’d found the lost mate, he would take on the task of getting him cleaned up and presentable so he could find his alpha. Although, since alphas and betas came together because of pheromones—subtle chemical scents—this little guy was going to have a devil of time finding his mate when he was covered in the ripe scent of angry skunk. Even after using a very good chemical formula, the essence would linger for days. Just being this close, the funk had gotten onto Cassidy and would cling to him for all it was worth.

Since skunks were active primarily during dawn and dusk and the stench was remarkably profound, Cassidy thought the man might have only recently been sprayed. Such a terrible scent would wake most people instantly, but if this man had traveled a long distance like most of the betas had, he might simply be too exhausted to awaken.

Loathe to rouse him, Cassidy spent another moment simply looking at him. Like all the betas so far, this one was shorter than six feet. Assessing him, Cassidy figured he was probably about five foot six and one hundred fifty pounds. His body was sleek with little fat but lots of smooth muscles. Even though he was small, he was probably very strong. Like all the other betas, he had an allover tan that highlighted the features of his form, like his strong calves and rounded buttocks. But what Cassidy could not stop staring at was his hair. It was gray. And not a phony dyed color but true, shiny gray like the color of clouds. A long time ago, Cassidy’s brother had been friends with a boy who started going gray at fifteen. Cassidy wondered if the same thing had happened to this man. He wondered if the slight snarl on his face was from his trip here, the curious nature of his hair, or if the stench started to penetrate into his sleep. Something about the young man’s angular features was angry. Still, Cassidy couldn’t wait for him to open his eyes. He wondered if they complemented or contrasted the color of his hair.

As if he’d summoned him to do his bidding, the man opened his eyes, causing Cassidy to gasp and inadvertently take another draw of the oily skunk scent. His eyes were the same color as his hair. Like angry storm clouds threatening to let loose a deluge, his wicked eyes pinned Cassidy where he stood.

After a brief flickering of his lids, the beta’s entire face scrunched up and he shot to his feet, coughing and gagging. “What the hell is that smell?”

“Skunk.” Cassidy continued, “Technically, it’s made up of mercaptans, but most people would describe the aroma as a mix of burnt rubber, rotten eggs, and garlic.”

“I know.” Cassidy held out his hand. “Come with me and I’ll get you cleaned up.”

“Hi.” Storm lifted up, wrapped his arms around Cassidy’s shoulders, and then pulled him close for a deep kiss.

Cassidy carefully eased Storm back. “We shouldn’t do this.”

Cassidy frowned, and Storm worried that he would put a stop to everything before he could have his protective scent on him. Storm pressed close, his lips frantic against Cassidy’s. For a timeless moment, Cassidy continued to resist, but then he gave in with a growl of defeat.

Hungrily, Cassidy cupped his massive hands to Storm’s buttocks and pulled him tight as he rocked his hips up, rubbing their cocks together. Friction created more heat between them as they ground against one another. The closer Storm came to climax, the more he lowered his moans until he was making a submissive beta whimper. It should have driven Cassidy out of his mind, and perhaps it did, but his mating call still didn’t prompt Cassidy to lay his claim to him.

Frustrated yet impressed by his refusal to take what wasn’t rightfully his, Storm fell a little more in love with his gentle giant. Cassidy was all the things Russell wasn’t. Where Russell was loud and pushy, Cassidy was quiet and persuasive. Where Russell was a man who took whatever he wanted regardless of the consequences, Cassidy was respectful of the rights of others. Where Russell saw no problem raping his mate, Cassidy would never perform such an abusive act. In this moment of clarity, alone with Cassidy in his room, their bodies rubbing frantically for release, all Storm wanted was a chance for happiness. Russell would never be anything but a monster. Cassidy could and would be a real and honest mate. Together, Storm and Cassidy could be truly, deeply, and blissfully happy. If only Storm could get Cassidy to claim him before Russell tracked him to the ranch.

“We should stop.” Cassidy tried again to separate their bodies, but he was sitting cross-legged on the floor with his back against the side of the bed. Storm was in his lap, his legs wrapped fiercely around Cassidy’s hips. To get him to let go, Cassidy would need a crowbar.

“Please,” Storm whispered, pressing his lips close to Cassidy’s ear so he could feel the heat of his breath. “I’m afraid I’m going to burst.”

Storm realized Cassidy was in the same situation. Just a bit more rubbing and pressing and they’d find release. “This won’t hurt anyone. Please. Finish. I need—”

Cassidy bowed his head, kissing Storm passionately as his fingers dug into Storm’s buttocks. Using his powerful arms, Cassidy literally lifted and lowered Storm against his rocking hips. If not for the sweatpants, he’d be slipping his cock in and out of Storm’s bottom with delicious intensity. But no. Storm had to content himself with this mimic of sex. Still, it was better than nothing and put him one step closer to actually getting Cassidy to claim him.

Desperate to mark himself with his new mate’s scent, Storm rocked and wiggled until he pushed Cassidy’s sweats down. When their bare cocks rubbed directly against each other, they let out a simultaneous moan of bliss.

As Cassidy reached the crest, he tore his mouth from Storm’s. Lowering his lips to Storm’s neck, he murmured, “I can’t resist. I can’t stop. You feel so good, so perfect. I want you. I want all of you.”