Nothing zings directly to the phallic like a well-hefted cigar. A distinctive, hard, yet soft cylindrical shape to be held, fondled, and sucked lovingly and sensuously in the mouth, providing not only strong sensations of taste, smell, and feel, but also a touch of the hedonist. A throb of risk to one’s health with red hot heat at its tip.

The authors provide a panoply of gay male short stories that are varied in length, style, mood, and subject matter, all centering on celebrating the “good ole’” cigar, and its effect on male-male relationships, in all its phallic glory. So, sit back, with or without your lover at your side, light up, and enjoy a good smokin’ time. 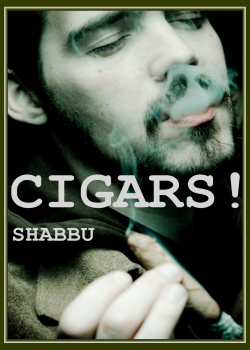 “Three boxes, Mr. Smith.” Bergstrum was holding up the top, squarish silver box over the table between us. “Perhaps you can give us some idea of your preference.”

He flipped open the lid of the box away from me. Cigars. Five cigars, of varying brands laid out in a row, snuggled into red velvet as if they were the crown jewels—and, although I knew next to nothing about cigars, I had no doubt that these cigars were as preciously bought as crown jewels.

“Oh, these aren’t for smoking, Mr. Smith.” He paused and gave me a broad, friendly smile. I turned to Nabil; he gave me a leery grin.

“Let me tell you how we rate cigars,” Bergstrum continued after that pregnant pause. “First, by length. All of these in this box are six inches or less in length. Sort of the standard size; but maybe a bit long . . . for a cigar.” He gave me a piercing look; gauging whether I was following his meaning. I wasn’t a dummy; I understood we weren’t talking about cigars.

“The other rating is in girth, diameter, if you will, Mr. Smith. We call this rating ring gauge. A sixty-four ring gauge would be equal to an inch. The cigars in this box all range around fifty ring gauge. Again, a bit thick for a cigar . . . if perhaps a somewhat disappointing thickness for, well, you know.”

“But we have several cigars here,” Bergstrum said, and he flashed me a broad smile.

“So,” he continued, “there are some very nice cigars in this case. Indian Tabac Cameroon Legenda Gorilla—interesting name, wouldn’t you say? At six inches in length and a fifty-eight ring gauge, it’s quite a formidable cigar, as cigars go. Or perhaps one of my favorites; this is a La Gloria Cubana Series R., No. 6, which is slightly shorter at five and seven-eighths inches, but a bit thicker at a sixty ring gauge. Do these interest you, Mr. Smith, or would you like to see what is in the second box before noting a preference?”

“Oh, let’s look in the second box,” I said. Obviously I’d said the right thing, as both Bergstrum and Nabil gave me approving looks.

“You’ll notice this box is longer than the first one, Mr. Smith,” Bergstrum said in hushed tones. “These are the truly extraordinary gems of the cigar world.” He took up the second box and flipped it open. Surprise. More cigars. Longer and thicker than those in box number one. Same silver encasing, blue velvet lining this time.

I could tell these were special to Bergstrum. He lifted them out one at a time, his hands trembling a bit. Those thick fingers lovingly handling the cigars. I could feel the heat rising in me. This was unusual for me. Bergstrum had something in him that aroused me. I had little question why he was so successful in the business world. Most probably called it charisma. I had other names for it.

“We are into the longer beauties now, Mr. Smith. Very few exist at this level. The Casa Blanca Magnum, at seven inches and a ring gauge of sixty is lovely, don’t you think? Or this Padron Magnum Maduro at a full nine inches, fifty ring gauge.” He was expecting me to be impressed, and I was impressed. I was being well paid to be impressed. I would have been less impressed if we were really talking about cigars, but, of course, we weren’t.