Claimed by the Viking Warrior

Edda refuses the fate that her sister's husband has in store for her. She can't bear the thought of marriage and motherhood. Instead she wants her freedom and she doesn't mind spilling blood to achieve it. Three years ago she ran away from her village, determined to prove she can survive alone. Since then all attempts to capture and tame this wild warrior woman have failed.

Aksel, the man once appointed to guard her, has sworn to find Edda and bring her home. In his eyes she's a menace, unfinished business, the one task he's ever failed at. When she takes a chance and ventures close to home again, he's ready to set his trap for her. He just doesn't know yet that once he has her in his grasp he might find it difficult to remember exactly which of them has captured the other.

Can Aksel bring himself to obey orders and send her to the husband who has purchased her? Or will this warrior woman lay siege, not just to his body, but also to his heart?

Claimed by the Viking Warrior

More From Gods and Giants

Claimed by the Viking Warrior
Georgia Fox
In Shelf
$2.99

He opened his eyes. Her lips were warm, soft. Her thick dark eyelashes fluttered against her cheeks and then lifted.

The moment she saw him staring back at her, she pulled away, of course. Her cheeks flushed pink.

What could a man say at such a moment? Usually Aksel had words for any occasion. This time he had none, but lay there like a fool. He tried to move his hands to touch her, and only then remembered his wrists were bound.

"I suppose you wonder why I did that?" she snapped.

"I wanted to see what it was like," she added crossly, one hand sweeping a few stray hairs back from her softly colored cheek. "I didn't expect it to wake you."

"I suppose it is just as well." With flustered hands she now checked her hair, making certain it was still firmly tied and out of her way. Long, thick and black as midnight, it was somehow tamed in a single fat braid down her back. "We will start for the village soon."

He licked his lips and tasted her essence. Hunger ripped through him, made his belly ache. Never much of an early morning fellow, he frowned up at the sky that still seemed dark to him, and then groaned sleepily. "I need to piss."

"Get up!" She leapt to her feet and poked his thigh with her toe. "I will take you into the trees. Don't try anything." Already she had her knife out again.

"I can piss on the fire and put it out for you."

Hmmm. What was she up to?

With one hand on his arm, she steered him into the nearest batch of spruce trees and commanded that he make haste.

"My hands are tied," he reminded her wearily. "Unless you'd like to hold my prick for me..."

She looked hesitant for a moment, but then apparently decided it was safe to let him hold his own. Having cut his bindings free, she held her knife to the back of his neck and waited while he relieved himself into the blanket of pine needles.

That felt better. He sighed heftily, yawned, and retied his breeches.

"Now, back to the campfire," she said, pricking his skin with the point of her blade. "We must wake the others."

"Wait." He turned to look at her. "Before we wake them. Is there anything else you're curious to try, Edda? Anything more than a kiss? They can't see us here, so now is your chance."

"This could be our last chance. Isn't that why you brought me out into the trees away from them?"

Her eyes widened. "What do you mean, our last chance?"

"Don't you think I'm curious too?" He slid his arms around her, pulled her up against his body and kissed her. The knife remained in her hand, but for once she made no effort to cut him with it. Her lips yielded under his, opening to let his tongue inside.

Aksel had never known so much heated anticipation racing through his veins. The moment he woke to find her sweet lips touching his in that shy way, he knew he had to have more. Much more. And, being Aksel, he would have it too.

With her breasts pushed into his torso, he could almost feel her nipples poking at him. Or, at least, he imagined it thus. If only they were not wearing so many layers.

He moved his hands down to her arse and stroked the taut curve under those breeches. He wanted to grind his erection into her vulva, but restrained himself. Just. He kept his groin steady, parting his feet for balance.

Calm yourself, Aksel. She's just a woman like any other.

But, by all the Gods, he was hot for her. His shaft was hard, his balls tight. Cupping her bottom he crushed her loins to his, knowing she'd feel his eagerness, his full length ready for her.

"Edda," he breathed as their lips parted, "let me touch you. Let me show you what you're passing up by living without a man."

"No." It bounced out of her before he had barely finished his sentence.

But he tightened his arms around her. "You say that on instinct, woman. You say it before you have even thought... even considered the possibilities."

She looked up at him, dark eyes gleaming, the breath forming little clouds by her mouth. "What possibilities? Explain."

"I could make you climax, bring you intense pleasure such as you've never known."

"Ryak wants a virgin to trade, does he not?"

Hope leapt to life in his chest. "I won't break your hymen." The words scorched his throat, as desire tore at his insides. "I just want to touch you. Show you..."

"You're touching me now."

"I must touch you under your clothes," he groaned.

Finally he loosened his hold and she stepped back. He waited for a slapped cheek or some spit in his face, but he was about to be pleasantly surprised. She glanced over her shoulder to be sure they were unobserved and then she thrust her knife into the tree bark beside them. "Very well. Touch me."

Aksel didn't wait to be told a second time. He unbuckled her old belt, which was almost falling apart and wrapped twice around her— clearly made for a much broader waist than hers. Then he lifted her tunic, sliding his hands up to her breasts. "Lean back against the tree," he muttered. "I want to suck your tits."

"But you said only touching," she protested.

Before she could complain again, he bent his head, roughly pulled up her tunic and set his mouth on her left nipple. In the cool air it was pert, already erect, primed for his less than tender suckling. 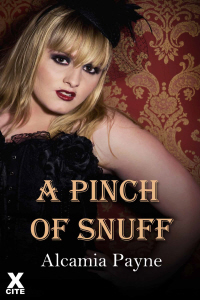 A Pinch of Snuff
Alcamia Payne
In Shelf
$0.99