OVER ONE MILLION BOOKS SOLD!

THE LONG AWAITED SEQUEL TO UNDER MR NOLAN'S BED

“With the mouth, confession is made into salvation…”

The shocking discovery best friends Leah and Erica have made under Mr. Nolan's bed has them down the wicked path of temptation, both girls veering far from the narrow path dictated by their strict Catholic upbringing, and their sexual transgressions have had unintended consequences.

Erica finds her life turned upside down when Leah falls for Erica's father, but just as Erica is beginning to accept their love for each other, Leah disappears. Bewildered and abandoned, Erica and Mr. Nolan are faced with sadness and confusion at their loss, but while Mr. Nolan spirals into mourning, Erica is determined to find her friend.

Erica can’t possibly know why Leah has vanished, but when she enlists the help of Father Michael, her search and the real reason for Leah's disappearance intersect to uncover a multitude of shocking confessions and a secret that will shake not only the foundation of their faith, but the entire institution of the Catholic Church itself. 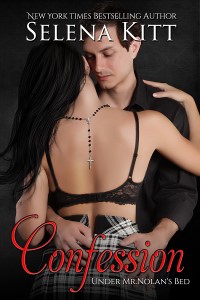 “Erica?” He looked down at her, curious. “Earth to Erica?”

She couldn’t tell him. It was too dangerous to tell him. She raised her head, looking into his eyes in the dimness, knowing she didn’t dare. She did the only thing she could think of to distract them both. She kissed him. This wasn’t like the last time, when it had been soft and sweet and light and easy. This kiss held everything, all the secrets, all the darkness, all the twists and turns in her, she put into the kiss, wrapping her arms around his neck, feeling the heat of his body, the way he held her.

“Erica…” He gasped as they parted, searching her eyes, and then he bridged the gap this time, taking her mouth, probing it open with his tongue, hands roaming under her long wool coat, her uniform blouse and skirt a thin barrier. She whimpered, struggling out of her coat. She pressed herself as fully against him as she could, letting him shift her weight, pulling her easily into his lap. He was wearing his cassock and collar, his uniformed commitment to the church and celibacy, but neither of them cared in that moment.

When he lifted her blouse, the heat of his hand was like a brand on her back, around to her belly, cupping the full weight of her breast. She moaned against his mouth, wanting more, more. She felt him, wiggling in his lap, so hard. She felt him through his priest’s robes, and she wanted him. She so desperately wanted him. She couldn’t fight it anymore, and he couldn’t either. They were lost in their lust, in the heated battle of their tongues, and they clung to each other as a soft white cover of snow on the windshield hid their passionate embrace. 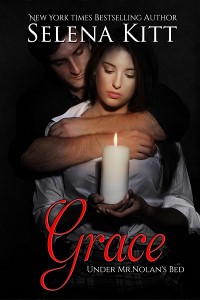