Cowboy Jake has a good thing going. He meets his sex buddy one day a week, and one day a week he spends a day cruising men at the gym. When he meets a new man who demands he change his usual day with his sex buddy to be with him, the cowboy fears that his possessive sex buddy may have set a trap to catch him cheating. Going along with it could mean the end of Jake’s good thing. 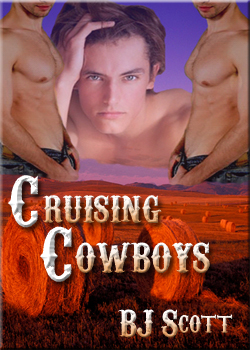 The big man leaned over him. “I’m here every week. Where you been, cowboy?”

“I come here on Fridays.”

“Start coming on Saturdays and you can have me every week.” The muscled butt walked away and Jake was left alone gasping for air. The man’s legs were thick, though nothing moved on any part of him.

Jake parked his truck and sauntered slowly to what he feared was his death. Stan was waiting at the door with an odd smile on his face.

Jake walked inside and there he was; his muscled sex buddy. “This is Droge. He plays football.”

So maybe it wasn’t a setup, but maybe it was. The man with the muscles didn’t seem to want Stan to know he picked up strangers. Maybe that was it. The three of them just stood there until Stan took Jake by the hand and led him into the bedroom. Jake heard the door lock and he turned to see his gym lover standing there, his legs apart and his hands on his hips.

Stan’s innocent smile quickly waned as he smoothed his hands along Jake’s chest. “Seems you have a secret, don’t you?”

“What are you talking about, young blood?”

Strength of the Alpha
Victoria Sue, Shannon West
In Shelf
$4.99
Tweets by
sirenbookstrand