An art teacher feels the need to teach her class the full beauty of art. Two hunky naked models show the class their full assets and her favourite pupil gets the lesson of the lifetime while her puny boyfriends looks on.

Writers block can sometimes get the better of authors. But this author knows that the fact that she can’t write is because she is lazy. She has no self discipline. Her boyfriend decides to help her out, but who knew discipline could be so much fun?

The Catnip Club by Cathryn Cooper

She had to be creative if she was going to pass her job audition. With the options she had, she decided to use the props to her best advantage. But would her new employer be impressed by her little show?

When you’ve been married for ten years, excitement doesn’t tend to be in the forefront of your mind. She woke up one day and realised that it had been too long, so with the aid of nature, she drives her man wild.

The thing with life is that we often rush it. So when he comes home to find her, he decides to take his time. Savouring every moment and every part of her is the most rewarding patience.

I was halfway through a promising spring semester with a gifted group of young freshmen, all girls and one uninspired boy. They were awe-struck by me, though I wasn’t much older than them, and one girl in particular caught my attention.
Emma was a natural beauty, fresh-faced and truly innocent, with none of the artifice the other girls possessed. She wore her dark hair long and her face was delicate and fine-boned, requiring no make-up to enhance her flawlessness. She was also a gifted artist, capturing colour and light in such vivid detail as to render it nearly photographic.
I was standing behind her one afternoon, studying her sketches from a previous class. Her hair smelled fresh and clean and, unlike the other girls who preferred low-slung jeans and belly-baring T-shirts, she wore a simple pink cotton dress and sandals. She was innocence incarnate and I felt a little rush of power, knowing that the young woman would soon be writhing in naked, lustful abandon before her classmates – and her boyfriend.
The boyfriend, a sad-looking young man named Danny, chose that moment to interrupt my daydream.
‘Uh… Ms Wentworth… I was, like, wondering – ’
I sighed. ‘What is it, Danny?’
‘Um, I kind of need to leave early because I have to see my allergist.’
The boy was unworthy of such a beautiful, luscious creature as Emma. She, unfortunately, didn’t seem to realise it. She smiled at him, completely enamoured by his pimply skin and scrawny body. I didn’t understand the attraction. I’d heard the other girls talk about the couple and how they hadn’t yet slept together because Danny couldn’t get up the nerve to entice her into bed. It didn’t surprise me. It was unlikely Danny would ever have sex unless some woman took pity on him and made the first move. Emma, lovely and sensual as she was, wasn’t going to be that woman.
‘Today’s class is of the utmost importance,’ I said with disdain. ‘I really must insist you stay for the duration as missing this class could seriously impact your grade and your continued enrolment in the program.’
‘Well, uh, I… I’ll stay. I’ll just be late or maybe I can call at the break and reschedule or something…’
I left him babbling and walked to the front of the class.
‘As some of you who have taken previous classes with me know, this is the point in the semester when we turn our attention to live model drawing.’
There were a few hushed giggles among the girls.
‘For this class, you’re not required to draw, but simply to observe and, perhaps, participate. Observation, of course, is the artist’s greatest asset, far more important than any brush or canvas. Participation is the artist transcending the art to become performance art. Observe and learn.’
As I finished speaking, the door to the classroom opened and two young men entered. Both were dressed in jeans and white T-shirts, and I knew from previous experience that neither was wearing underwear.
‘We’ll begin by studying the male form,’ I said. ‘As I’m sure you will agree, Carlos and Ian are fine examples.’
I glanced pointedly at Danny, who blushed uncomfortably. In contrast, Emma glowed with excitement.
‘Gentlemen,’ I said, gesturing to the centre of the room. ‘Please undress.’
Carlos quickly stripped off his T-shirt, revealing broad shoulders and rock hard abs. My pulse quickened as he unsnapped his jeans. Ian followed suit and, in a few short moments, both men were gloriously naked. I admired their bodies only cursorily, more interested in Emma’s response. She looked back and forth at the two men, as if comparing them, her gaze lingering on their long, thick cocks. I’d chosen the men for their endowments as well as for the beautiful contrast between Carlos’s olive complexion and Ian’s fair one. Their bodies were different as any two bodies will be and it was this I wanted to impress upon my students.
‘Carlos, if you would be so kind as to stroke yourself to erection,’ I said. ‘Students, please make note of the differences in shape and colour between a flaccid penis and an aroused one.’
Carlos fisted his cock as requested, until it was hard and thick. I could hear the appreciative gasps of the girls in the room, including Emma. I smiled.

In The Back Seat
Miranda Forbes
In Shelf
$2.99 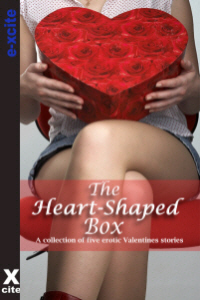 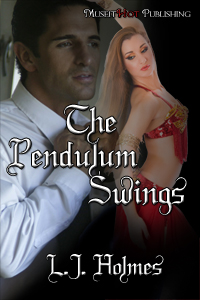 Out of Focus
Primula Bond
In Shelf
$0.99

Just Another Lady
Penelope Friday
In Shelf
$0.99
Tweets by
sirenbookstrand