Struck by insomnia, Len Crocker is desperate to try anything to get to sleep, even obtain the services of a mysterious living god, and probable huckster, known simply as The Sandman.

When the object of Len's desires, Andrew Gibbons, springs for the nighttime session, Len is amazed by The Sandman's effectiveness...and pleasantly surprised with what he finds in his bed the next morning. 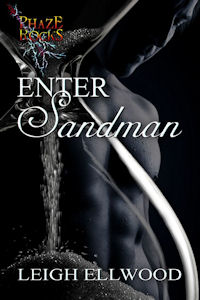 Multi-colored strobes cut the air and flashed in rapid, nonsensical patterns. The shrill beat of a Gwen Stefani tune, jacked up twenty more miles an hour than the law should allow, vibrated the floor and every panel of wood keeping the club intact. Men danced and flirted and reveled in the night’s celebration—as though anybody needed an official reason to indulge in good feelings and great friends. At Third Dimension, a gay man could shed his inhibitions and the conventions of the outside world and be himself.

Any other night, Len Crocker would be out on the lighted floor, grinding and gyrating amid crowded bodies, energized by the collective musk of hard men, horny men, queens and twinks and bears—oh my! Now, perched on a stool at the bar, hunched over a steaming mug of coffee, he just wanted everything to mute and morph into a Quaalude dream, slow enough to let him slip away without Spike and Gerry noticing. He wanted the bartender, hovering close with the coffee pot as though waiting to refill, to go away. He wanted Gwen to shut the fuck up. He wanted to go home and sleep, but knew that wasn’t an option. Hadn’t been for six weeks now.

As Gwen’s techno-driven, helium-voiced scat segued into more of the same from the month’s latest pop tart, Len felt a nudge at his wrist. The bartender had set a bottle of Jack in front of him.

“Maybe a little liquid inspiration in your coffee to get the heart pumping?” He punctuated another silent offer with a wink.

Len snorted. He didn’t even need the coffee, and God only knew why he’d asked for it. Alcohol proved useless in helping him wind down, otherwise he’d have chugged at least a fifth of Scotch on arriving.

He refrained from a response and the bartender shrugged. “Whatever, guy,” he said. “It’s a gay bar. Just lighten up, eh?” And he granted Len’s wish by shuffling to the far end to chat up a more amicable pair in matching Polo shirts.

Figuring his exposure at the bar might attract more unwanted attention, Len grasped the mug and loped off toward privacy. He found an empty, shadowed circular booth situated on the opposite end of the dance floor—couples used it normally for a clandestine blow job or fisting—and slid against the cool vinyl to the middle. This granted him a nice panoramic view of Third Dimension, and easy spying access on Spike and Gerry, who twisted and tangled with another couple under the rainbow track lighting. They appeared totally in their element, and as Spike drove them all here—and had literally carried Len and shoved him into the backseat—Len knew he wasn’t going anywhere soon.

The coffee burned him, and Len pressed his tongue to the roof of his mouth, wincing at the odd sensation of heat mixed with dark roast. The bitter stench curled in beckoning fingers of steam above the rim of the mug, as though taunting this extended bout with insomnia. He pushed the mug aside and rested his head in folded arms—a futile effort, but the scenery proved too repetitive and uninteresting for him to watch anymore.

He didn’t know how much time had passed—the segueing in the music stream offered little help, everything sounded the same—before he sensed another presence close to him. A shadow fell across his narrowed line of vision, which previously granted him a sideways view of the path toward the bathroom and back area by the pool tables. He inhaled a tangy cologne that burned his lungs and warmed his blood.

“I won’t keep you long,” the voice began, deep and smooth. “I just couldn’t help but notice you slumped over like you’d lost your best friends.”

“I didn’t, I know exactly where they are.” Len jerked his head back slightly to indicate the dance floor. “And in all honesty, I’m not looking for a sympathetic ear...or penis,” he added as he turned his gaze, then immediately wished he could take back those words.

Shit. Of all nights for the object of his wet dreams to finally acknowledge his existence, here he’d nearly blown him off—not in the good way, either. Len straightened and offered Andrew Gibbons a weak smile that the other man might hopefully interpret as an apology and invitation to remain.

“Sorry, Gibb,” he said, raking a hand through his hair. Everybody called the gorgeous, tanned brunet by this shortened version of his surname. Len hoped this manner of address wouldn’t provoke an annoyed response, seeing as how he and Gibb had never before spoken privately. Len thought until now he had to stay content with admiring the lean gym god from afar, or listening in on a group conversation dominated by others.

“Been a rough week,” Len added.

“Looks like you’ve had a full calendar of rough weeks,” Gibb observed, tilting his head for an intense gaze at what Len certainly perceived were eyes darkened by bags underneath the lower lids. “Wanna talk about it?”

Len’s tongue thickened in his mouth. Words, he suspected, might come tumbling out in a garbled mess. After a swig of still molten coffee for courage, he smiled. “End of quarter reporting is always a son of a bitch,” he said. “I have to meet with the board of directors at my company next week and convince them to keep our budget the same, or at least not cut it to the point where they have to start laying off people.”

“Ouch.” Gibb winced. “I don’t envy you that. Do you really think you have to tell them to fire anybody?”

“I hope it doesn’t come to that.” Len shook his head. “It’s just the anxiety getting to me. I haven’t slept well in so long. I got bills due, loud neighbors, ugh!” He’d hole up in a hotel room if he could afford it, but Gibb didn’t need to hear about his money woes. Spike and Gerry spotted his cover charge tonight, and that had embarrassed him plenty for the month.

Gibb clicked his tongue against his teeth, and reached into a back pocket. “That doesn’t sound good. If you could at least sleep, you’ve won half the battle. You’d think straight.”

Len really wanted to laugh. “I haven’t had a straight thought since I was sixteen.”

“Good one. Here.” Gibb pulled a card from his wallet and slid it on the table toward Len. “I had a problem with insomnia last year, contacted this guy, and he took care of it. You won’t find anyone better to help you.”

Len looked at the card but didn’t pick it up. He saw no designs or fancy fonts, just a white rectangle with bold, raised lettering:

THE SANDMAN – A PEACEFUL REST GUARANTEED

He frowned, then slid his thumbnail down to lift one corner of the card. “There’s no phone number, or e-mail address,” he said. “Not even a Twitter handle for a direct ping. How am I supposed to get in touch with this Sandman?” Len reached into his pocket for his smart phone, but after a few quick searches through his Web browser window he could find nothing remotely related to Gibb’s testimonial.

Gibb pressed his finger against the card and slid it back. “Now, now, I didn’t exactly say you had to make the call. Trust me, I know where to find him.” Gibb chuckled. “In fact, I could try him tonight, if you’re interested in getting some sleep this weekend.”

Len sighed. How deliciously forbidden that sounded. With two days of downtime ahead of him, he desperately needed to catch up on forty winks, times infinity. Suddenly, a sobering thought shuddered through him.

“You know,” he put away the phone, “the way that card looks, he’s probably very exclusive. I doubt somebody like that would be available on a whim—”

He looked up just as Gibb put his own phone to his ear, and pressed a hand against his other ear to listen without too much distraction. Ignoring Len, Gibb conversed with the party on the other end. “Hey, I have a last-minute appointment if you can do it,” he half-shouted. Len watched as Gibb’s face lifted in a smile, and Gibb winked.

“Great! I’ll text you the address in a few minutes.” Gibb rang off and beckoned to Len. “He’s in between clients, but said since he’s on this side of town he’s happy to squeeze you in if we get you home now.”

“People sleep at night, don’t they? What do you say? Are we going home?”

Home? The idea of having a strange man poking around his apartment so close to midnight unnerved him. Gibb, on the other hand…

He pinched the bridge of his nose. Ugh! Under any other circumstances, he’d welcome the opportunity to entertain Gibb at his home…on the couch, in bed, wherever the man felt most comfortable or willing. As Gibb tried to lead him out of the booth another thought struck him.

“Wait, how much is this, uh, service?” he asked. A cryptic business card hinted at a possible bill equal to his rent payment. “If he’s expensive, I can’t do this. And what does he do, anyway?”

Gibb waved him closer, stepping toward the exit. “Relax. It’s on me. Crane’s kind of a pay it forward guy, and so am I.”

“Crane?” The name evoked an image of a burly, homophobic construction worker, come to cure Len’s insomnia by bashing him upside the head with a crowbar. Maybe he and Gibb worked together, and would rob him blind after rendering him unconscious. “First or last name?”

Gibb kept pushing him to the door. “The fewer questions you ask, the sooner we can get you to sleep. Don’t worry about your friends, I’m driving you. You got everything you came with?”

All this and insomnia, too. Once out into the lot, Len looked sheepishly around. He didn’t know Gibb’s car. “Uh, you have to take the toll bridge to get there,” he said. “You got change?”

Gibb scratched his chin, as though considering the expense, then winked and led Len to a black Lexus. “You’re worth it.”

“Gee, thanks.” He’d roll his eyes if he didn’t think Gibb looked so damned adorable when he said that.