Kelly Matthews has every intention of forgetting the ravishing vampire who’d stolen her heart a year ago, but their blood bond will not let her forget. Add the fact that her dance company would be performing in his home town of Paris, France. Kelly fears what will happen if she sees him again and worse…what if she doesn’t? A punch in the nose is the last thing Jacques expects when he comes face to face with Kelly for the first time since leaving her a year ago. Now convincing her that he made a mistake and getting her back into his life is the hard part.

But another weaves his way into Kelly’s mind. She is the very image of a love lost to him one hundred fifty years ago and nothing will stop him from reclaiming her. Jacques is determined to protect her, but his new enemy—once a friend and a teacher—is older and stronger and Jacques will risk all to ensure Kelly remains forever his. 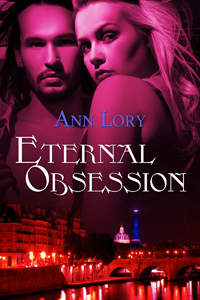 Closing the door, she returned to her vanity and sat. Though she looked hard into the mirror, she saw nothing. Could she truly communicate with Jacques? Did she want to?

She thought of his long, wavy dark brown hair and his bold nose, so strong and striking. The way his lips curled into a seductive smile when his eyes devoured her very soul. Yes, those eyes…black as obsidian, they held her spellbound.

Kelly’s breath caught; she was actually doing it! She saw him, clear as day. Her heart raced, and she covered her mouth as she gazed upon his perfect male features.

Jacques sat at a large mahogany desk, a lit fireplace off to the side and behind him. His long hair fell over his face as he sifted through paperwork, and he pushed the unruly locks back. Then his long body leaned deeper into his high-backed chair.

He tensed, then his movements froze. Kelly inhaled and exhaled in short, quick spurts as his eyes lifted slowly. It was as if he were staring right at her, which didn’t seem possible, but she knew it was exactly what he was doing. He was seeing her. His presence filled the room; warmth spread through her body as if he held her in his arms.

Her name was a whisper. His warm breath fanning her cheek as the deep sound of his voice washed over her like dark silk. She closed her eyes at the glorious sensation of him talking to her within her mind.

She hadn’t intended to call back to him, but it seemed natural to do so. Opening her eyes, she saw his shut in turn, as if he were savoring a delicious treat. “Jacques,” she said again, wanting him, needing him. With her mind, she reached out, let her fingers stroke his hair, his face. She heard him exhale in a long breath, then he faltered. His eyelids snapped open as if he was only now realizing what was happening.

He shot upright in the chair his eyes blazing with desire and fury. Their dark depths locked on her, branded her with heat. She whimpered when fingers fisted in her hair, his hot breath brushing over her lips. “You must not,” he whispered. With a wave of his hand Kelly felt as though she were being hurled from his room. She blinked in surprise, her senses reeling, and grasped the vanity table for balance.

Comprehension settled around her heart, and disappointment quickly turned to anger. He shut her out, just like before. So that was the way he wanted it?

Confessions of a Lady Ruined (MF)
Karen Lingefelt
In Shelf
$5.50