There is only one man in Samantha’s life, only one man she truly desires, and he is forbidden to her, off limits, taboo, which is no doubt the reason for her never ending desire for him. Very few things in Samantha’s world are considered taboo, but that is because the woman is young and idealistic, or perhaps she simply lacks boundaries. A young woman with raging hormones, Samantha’s lust can no longer be ignored. A night alone with her cowboy is the only thing that stands between Samantha and paradise, but arranging this forbidden liaison may pose more challenges for the young woman than she has anticipated. 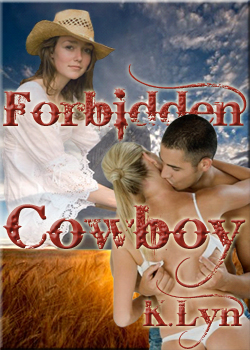 When the water stopped, Samantha’s heart began to pound inside her chest. She jumped when the shower door was flung open. There he was, naked, drops of water clinging to the hair that covered all of him.

“Samantha!” Not prepared to have been seen naked by the woman he thought of as a younger sister, Joe quickly covered his private parts, but not before Samantha had gotten a good look at what she now wanted more than she had originally thought.

Knowing that it was now or never, Samantha stood up and boldly took Joe by the hand. “Come with me.” Having no idea what was up with Samantha, he allowed her to lead him into his own bedroom. The sun was setting and it made the unappealing bedroom seem almost romantic. She turned toward him and held both of his hands. Eye level with Joe’s chest, she was dying to lick the hair away from his nipples and lick and suck and bite those mouthwatering tips.