Alexander Lansing ran a trembling hand through his hair. There was something about this woman which made him feel like a callow, inexperienced youth.

Even if this was only a brief sexual encounter, he wanted it to be special...

After being abandoned by her mother, Genesis Kelly trusts no one and believes in nothing. However, she wants to understand the mysteries of sex and seeks employment in a high-class brothel.

When a gorgeous stranger falls for her, she must choose between his love and the way of life she is determined to follow. 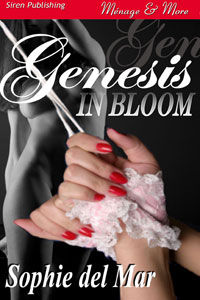 "Join me here on the bed." His voice was honey to her ears. "I promise I won't bite you unless it's expected of me."

Torn between her desire to flee before things got out of hand, and her desire to know this Greek god in evening attire, Genesis hesitated. Why did he have to be so damn gorgeous?

Feeling like a defiled vestal virgin, she walked towards him. He met her in the middle of the room and she ran a hand through his thick hair. He slid his thumb across her lower lip then slid his hand down her throat until it cupped her full breast. Finding her hard nipple, he stroked it through the sheer material of the gown. She gave an involuntarily moan, which he silenced with his kisses.

"Have you been treated badly?" His voice was a hoarse whisper. "Is that why you found my touches distasteful?"

"They weren't distasteful by any means," she said quickly. "Sometimes women have their moods."

Sadness softened his strong features, making him seem young and vulnerable. "I know something of female moods. If I've done something to offend you, I beg your forgiveness."

"You've done nothing at all." She surprised herself by resting her head against his powerful chest. "I pray you will continue with your distasteful touches."

He threw back his head and laughed. He appeared happy and carefree, not the same dour man who first stepped into her room. She wondered about the melancholy expression which had touched his face. Perhaps like her, he wrestled with his own demons.

She had little time for speculation because his warm mouth skimmed across her throat. A thrill of desire coursed through her system, and she licked her lips in anticipation.

Her pulse quickened as lust engulfed her body and roared through her bloodstream like a consuming fire. She tangled her fingers in his hair as he slid the strap of her gown off her shoulder. One of her breasts sprang free, and he took it gently in his hand.

"So beautiful," he said softly, "so damn beautiful."

Then his mouth claimed her nipple and she gasped with surprise and pleasure. He licked and suckled on the extended peak as she embraced him tightly against her body.

She saw the hunger in his eyes, and his craving for her aroused her senses. He had a look of wonder on his face as his gaze held hers. At that moment, she felt like a fairy princess on her wedding night. She knew no princely groom could be more attentive to her than Alex Lansing. Feminine power surged through her body with this new and compelling emotion. Yet she also felt humbled by the thought of this exquisite man desiring her with such intensity.

"I want to fuck you and keep fucking you," he rasped against her skin.

The crudeness of his words didn't offend her. Instead they caused a heavy fullness between her legs, an urgent need to be touched by him, caressed by him, fucked by him.

"I feel the same way," she whispered against his ear. "Though perhaps you won't enjoy it enough to request an encore."

"I've only had a few moments with you and I already crave an encore." He stroked her nipples and they stiffened under his touch. "These are the most succulent buds I've ever seen."

Her skin tingled with excitement and his eyes held a predatory gleam.

His voice was a low growl, rich and deep with a hint of roughness. "I know I'll be back in this room tomorrow night and every night until I get you out of my system."

He took her nipple between his teeth, and she gave a sharp gasp.

"Did I hurt you?" he asked with concern.

"Do your clients pleasure you in this way?"

He drowned out her words with a kiss which was manly and potent. "Do any of them kiss you this way?"

She knew no one would ever kiss her with such passion.

The door to the room swung open and a tall, dark-haired man appeared in the doorway. He was dressed in the uniform of an officer, although his jacket was unbuttoned and he was barefoot. He carried a pair of boots in his hand and his cap was tilted at a rakish angle. His gaze slid to the bed and he raked it across Genesis's nude body. She sat up and looked at him for a long moment before reaching for a sheet to cover herself.

"What's the meaning of this?" Alex demanded. "What do you want here?"

The man gave them a half-smile as he leaned against the door jamb. It was obvious he was intoxicated and barely able to stand. He attempted to bow and nearly fell forward on his face.

"Captain Graham Murdoch at your service." His dark gaze ignored Alex and focused on Genesis. "If I'm not mistaken, this must be the party room. I was next door when I heard the cries of ecstasy coming from in here. I had to meet the glorious lady with the exquisite voice. Would that be you?"

He gave her a disarming smile which set Alex's teeth on edge.

"Forgive me for disturbing you, Captain Murdoch." Genesis gazed at him boldly as her luscious mouth curved into a seductive smile. "I'm afraid I lost control during the heights of passion."

"Believe me, you disturbed me in the nicest possible way."

"Then it's a pleasure to meet you." She lowered the sheet and Graham blinked in surprise and pleasure. His gaze was captured by her full, heavy breasts and rose-colored nipples. A provocative smile played across her face as she watched him.

Alex grabbed the sheet and pulled it up to cover her body.

"What are you doing?" He glared at her. "How can you behave like—"

"Behave like what?" she said softly. "Behave like a courtesan? That's what I am, don't you agree?"

"Yes. I mean no. This evening was your first sexual experience, so you're barely a beginner."

"I just missed having a virgin?" Graham gave a self-mocking laugh. "Then perhaps you'll allow me to be your second conquest tonight."

Alex's voice was a deep growl. "The lady is spoken for this evening."

"You must speak to Madame Colette, but I'm sure she can schedule it." She tossed back her hair. "Tell her Genesis is now accepting gentlemen callers."

"No, she's not," Alex contradicted her.

"I am accepting clients." Her mouth was set in a determined line. "I'm sorry, Alex, but if you wish to see me again, you must make an appointment."

The captain nodded. "Then I shall speak to Madame Colette so I can book you for the entire evening." He blew her a kiss. "Until tomorrow night, my beauty."

Murdoch stumbled down the hallway carrying his boots. Alex considered racing him to Colette's office so he could speak to her first. Then he realized it might be more advantageous to offer her a hefty bribe in order to secure Genesis's charms for as long as possible. He needed time to get her out of his system. Until then, he had no desire to share her with amorous cavalry officers.

He stood up and slammed the door before turning his angry gaze on her. "You seem determined to jump into this lifestyle with both feet. Are you at least taking precautions to prevent pregnancy? What if you end up carrying that drunkard's child?"

Genesis raised an eyebrow. "Drunkard? I found him extremely attractive. Tall, handsome, virile. Much like yourself."

"Don't compare me to him." He scowled at her, too angry to speak.

"And to answer your question, I'm taking the herbs Madame gave me to prevent conception. She said they're very effective. I have no desire to end up unmarried and pregnant like my mother."

A frown furrowed his brow and he wondered about the significance of her words. Why had she chosen this life for herself? Did her mother have something to do with it?

His temper softened as he drank in the sight of her half-bare breasts and the raven hair which spilled across her cheek. He thought she was the most beautiful thing he had ever seen.

Heart of a Mountain (MM)
Stormy Glenn
In Shelf
$4.50
Tweets by
sirenbookstrand